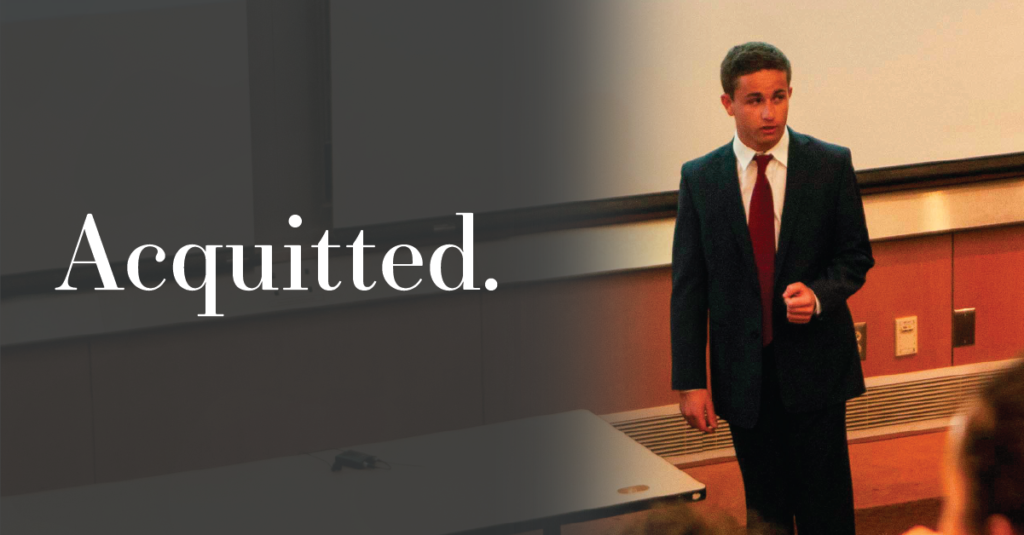 The Student Assembly (SA) of the Undergraduate Government of Boston College acquitted President Christian Guma in a vote of 15 for conviction to 11 for acquittal, three votes short of the 18 required to convict and remove Guma from office.

“Truth and reason will always prevail,” Guma, CSOM ’21, said in a statement to The Heights. “We can all put this behind us now. We can finally get back to work and actually try and help our students. Over the next few weeks we will be listening to all voices to ensure students feel at home, and we will continue our push to uplift campus morale especially for our upperclassmen. I look forward to finishing out my term strong.”

SA Representatives Leonardo Escobar and Mitzy Monterroso-Bautista, both MCAS ’22, filed an article of impeachment on Feb. 8 against Guma for posting a statement to the UGBC Instagram account on Feb. 3 without approval from the UGBC Community Relations Committee, as required by the organization’s constitution.

“He knowingly violated the constitution by saying this was our statement on behalf of all of UGBC,” Monterroso-Bautista said during the trial.

Guma’s original Feb. 3 statement—the post for which he was tried for impeachment—was written in response to the vandalism that occurred on the Multicultural Learning Experience (MLE) floor of Xavier Hall. The statement was deleted shortly after it was posted and was replaced with a second statement attributed explicitly to Guma.

Chinenye Ugocha, director of the AHANA+ Leadership Council and MCAS ’21, criticized the statement for being offensive.

“Being a person of color, I thought this statement was offensive and I felt it was very disheartening coming from our president,” Ugocha said. “It didn’t really address the needs of AHANA+ students who have felt that their administration, their executive council, has not reached out to them, has not felt like their voices and their needs [have] been heard.”

The trial came two days after the Parliamentary Board of UGBC denied Guma’s petition on Sunday to dismiss a resolution scheduling his trial for Tuesday or to convene the SA to further debate a resolution.

Julia Canzano, MCAS ’21, defended Guma in the trial. She argued that the post did not need approval from the Community Relations Committee because it was not an official statement from the SA.

Monterroso-Bautista said it would be hard for the student body to not think of the post as an official statement, as the original statement was captioned “our statements regarding the acts of vandalism on the MLE floor this weekend.”

Monterroso-Bautista said there would have been no reason for Guma to revise the post in the first place if it had not violated guidelines.

“If you stand by the fact that your initial post is not [an] impeachable offense then why did you ask just to remove the post and then upload an amended version?” she said.

Guma said that he made a typo in the original posting. Within minutes, the original post was deleted, he said, and it was later replaced with one that was captioned as “a word from UGBC president Christian Guma.”

“There was a typo in the post, and I wanted to clarify it,” he said. “That was the goal of changing it.”

Monterroso-Bautista said that Guma’s posting had a negative impact on students of color.

“The reason that we are pushing forward with impeachment is relevant and … we’re pushing for it because of the way it affected AHANA+ students,” she said.

“His impeachment is not about what he said or the impact that it had,” she said. “President Guma cares about having the voices of AHANA+ students heard and their concerns addressed. This is strictly about the act of posting.”

Jack Lewis, UGBC chief of staff and MCAS ’21, said in a statement to The Heights that he is glad the impeachment trial has come to a close.

“As President Guma said, we can finally get back to working for the students—as we should have been doing for the last two weeks,” Lewis wrote. “Though some attempted to use this trial as a moment to blemish President Guma’s character, we are [confident] that his acquittal and vote of non-impeachment will underscore the error of the claims made against him.”

Update 2/17/2021 5:30 p.m.: This article has been updated to reflect UGBC President Christian Guma and UGBC Chief of Staff Jack Lewis’s statements on the acquittal.