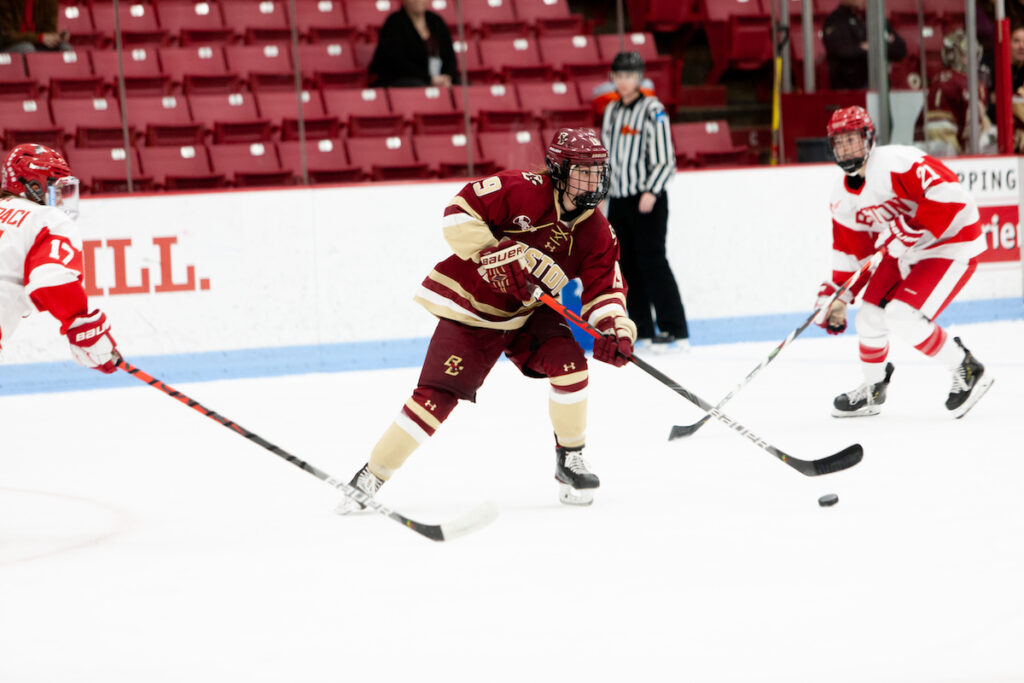 Without the cooperation of every position group, a hockey team couldn’t function at its highest level, but Boston College women’s hockey might argue that the player absorbing slap shots at the blue line has made all the difference in a number of its recent games. Eagles senior captain Maegan Beres leads the Hockey East in blocked shots by a forward, but her propensity for defense extends far beyond the scoreboard and statistics.

“She does everything for her team,” BC head coach Katie Crowley said in her postgame press conference on Friday. “It’s never about her. … It’s always about her teammates and what she can do to help her teammates be better.”

Despite a hot start from Beres and her fellow Eagles, No. 6 BC (13-4) struggled with disciplined defensive play in the second and third periods against Boston University (6-4), and fell 3-2 to the Terriers at Kelley Rink.

It was all Eagles in the first period, as the home team came out flying and put BU on its heels early in the contest. Kelly Browne lit the lamp midway through the first frame as she lasered a shot past BU goaltender Kate Stuart with the help of a Savannah Norcross screen. Norcross was rewarded with a goal of her own with just 2.2 seconds left in the period when she poked home Browne’s rebound to give the Eagles a 2-0 lead heading into the first intermission.

Special teams proved to be a deciding factor in the outcome of the game, and BC struggled to build momentum as a result of a pair of penalties in the second period. When officials whistled Cayla Barnes for interference three minutes into the second period, the Terriers were quick to capitalize. Offensive catalyst Jesse Compher ripped a shot past BC goaltender Abigail Levy to earn her 125th career point and cut BU’s deficit to one. BC came close to regaining its more comfortable two-goal lead off of a Deirdre Mullowney blast in the slot, but her shot was deflected just wide.

BC’s defensive corps was noticeably sparse on Friday, as the Eagles only had four of their rostered six defenders available for the game. As she has in recent games, though, Beres performed on defense, recording a block. All together, eight Eagles notched at least one block on the defensive end, five of whom are forwards.

“Some of those players back there played a lot of minutes … they played probably 30 minutes of that game,” Crowley said.

Even with a depleted defense, the Eagles’ back line put on a clinic. Levy was out of her typical form, allowing three goals on just 24 shots. Barnes bailed Levy out early in the third period with a goal-line save, holding the score tied at two apiece.

As the game wore on, however, BC faltered under the Terriers’ increasing momentum.

Levy made a number of key saves to keep the Eagles’ hopes alive, but after a tying goal by BU’s Mackenna Parker in the opening minutes of the third period, the visitors began to take control of the game. Compher delivered the dagger with 40.3 seconds left in the game, earning her second of the night and a victory for the Terriers.

BC’s loss was its first since a Dec. 11 loss to then-No. 2 Northeastern.

“I think … we sat back on those [first] two goals a little bit instead of keeping the pressure on them,” Crowley said. “When you have a BU-BC rivalry, there’s not much you have to say to get people [hyped] up for a game.”