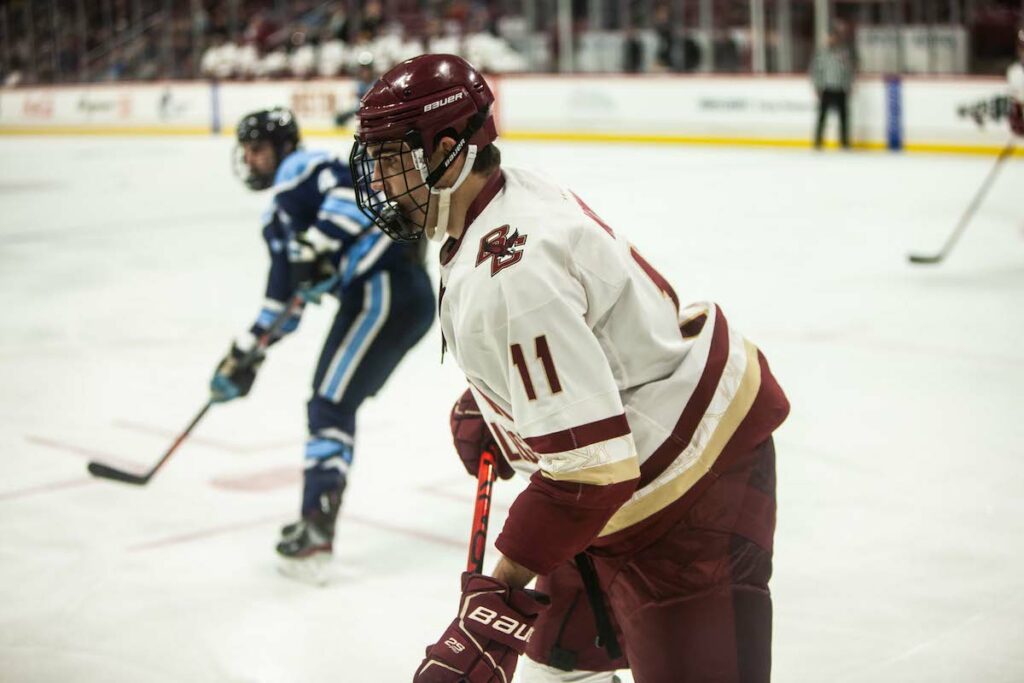 After Friday’s slow start that turned into a victory over Maine, Boston College men’s hockey was determined right from the first puck drop to begin Saturday’s game ahead at the outset. The Eagles took control of the game right from the get-go, firing shot after shot on Maine goaltender Victor Ostman, who seemed more like a brick wall than a hockey player.

Despite controlling the pace and play of the first period, the top goal-scoring offense in the Hockey East just could not beat Ostman despite 23 shots on goal through 20 minutes.

Maine looked renewed after the first intermission, but the Eagles finally broke the ice with just under seven minutes remaining in the second frame. Assistant captain Patrick Giles found the loose puck in a net-front scramble and slotted a rebound home to give the Eagles the elusive one-goal advantage they had been hard pressed to find. After finally lighting the lamp late in the second, the No. 1 Eagles (15-3-1) held onto their momentum and shut out the Black Bears (2-9-1) to complete the weekend sweep with a 3-0 win.

Even though the scoreboard remained unchanged until late in the second period, the game’s physicality was on display right away, as BC head coach Jerry York predicted in Friday’s postgame press conference. Both teams connected on open-ice hits and several post-whistle scrums ensued. Harrison Roy let his emotions get the best of him, taking a game misconduct boarding penalty shortly after getting hit himself.

The Eagles’ penalty kill continued its stellar play by shutting down Maine’s resulting five-minute power play, even after a tripping call on Nikita Nesterenko gave Maine a 5-on-3 advantage. Spencer Knight had to make several key saves on the long penalty kill to keep the game scoreless.

“I thought our PK and Spencer [Knight] were really solid during that period of time when the game could have flipped,” York said.

Quickly after the power play expired, Giles scored the first and ultimately game-winning goal.  Even though the sophomore line has been racking up the majority of the Eagles’ points as of late, Giles and his fellow captains continue to fulfill their roles for BC, even more so following the season-ending injury for senior winger and assistant captain Logan Hutsko.

“You have to handle frustration to be a good team,” York said. “We had all kinds of opportunities, but that frustration never seemed to set in on us. The leaders on our team really helped us do that.”

The Eagles added some much-needed insurance goals in the latter half of the third period.  After officials granted the Eagles a power play, the red-hot Alex Newhook wristed a shot past Ostman from the high slot to double BC’s lead. The goal was Newhook’s fourth goal of the season on the power play in just his seventh game. Since his reinsertion into the lineup after injury two weeks ago, Newhook has six points in six games, reinvigorating the Eagles’ power-play unit that had been struggling mightily prior to his return.

“I think clearly we’re getting better as a power-play unit,” York said. “They’re more cohesive. I really like that unit. Special teams play a huge difference in games.”

Just 33 seconds later, the Eagles lit the lamp again. Colby Ambrosio put home a rebound for his seventh goal of the season to seal the game and give the Eagles the 3-0 lead.

On a second consecutive slow start, the Eagles showed the persistence that has earned them the spot as the No. 1 team in the nation. The Eagles tallied a season-high 59 shots on goal and ultimately earned a hard-fought victory—their fourth in a row and seventh in their last eight games.

“I thought our effort was outstanding,” York said. “We’re getting contributions from all four of our lines. We had 59 shots on goal tonight. That’s really a result of shooting the puck and getting traffic in front of the net and making good plays. I thought our offense was outstanding tonight.” 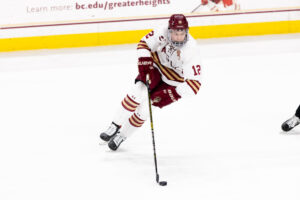 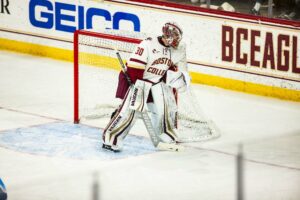