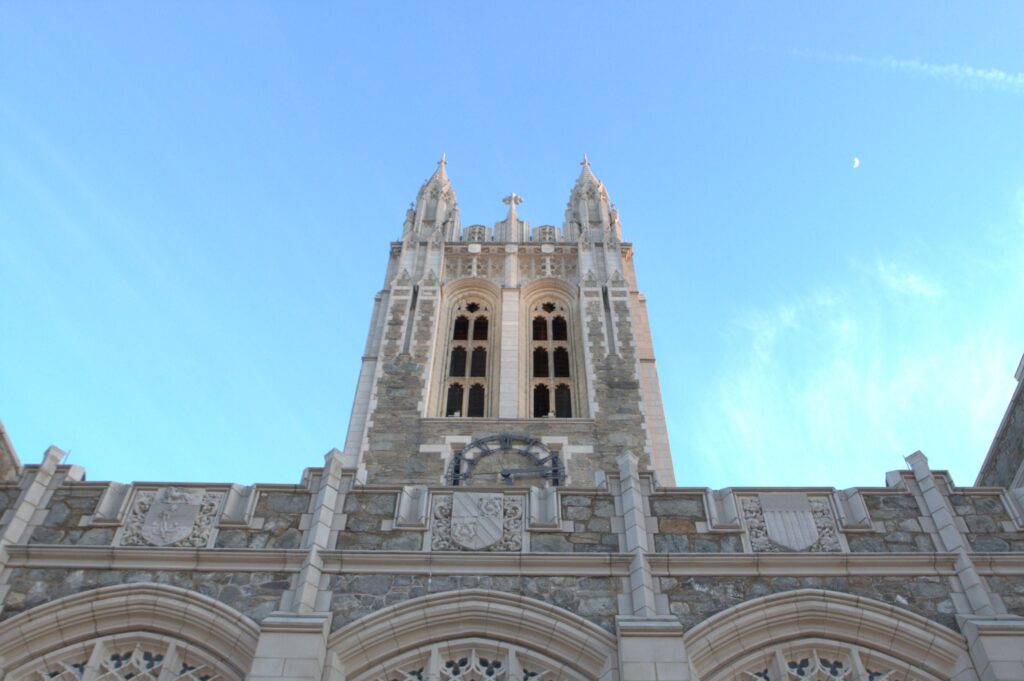 Latifat Odetunde—this year’s recipient of the annual Martin Luther King, Jr. Scholarship—said that she was inspired by the excellence of her Black peers when she attended the scholarship ceremony during her freshman year.

“Seeing all of the scholars, seeing all of the videos and all that they were able to achieve in their two years was just so inspirational,” Odetunde, MCAS ’22, said. “It literally brought me to tears just to see Black excellence … Seeing the ceremony, it pushed me to say, ‘You know I need to be super involved. I’m capable of doing this.’”

The award is given each year to a junior who has excelled in academics, extracurricular leadership, and community service, and who has been involved in the African American community at BC and beyond, according to the BC website.

Odetunde joined the Student Admission Program (SAP) her freshman year and became a part of the AHANA Outreach Program.

She helped plan that year’s AHANA+ weekend—an annual event in April when high school seniors who have been admitted to BC can join other AHANA+ students in exploring what resources BC has to offer. The event was significant to her because AHANA+ weekend was one of the main reasons she chose BC three years ago, Odetunde said.

“It was a time where I felt like I would have a community if I was to enroll at Boston College, so AHANA weekend was an amazing experience where I was able to see what BC had to offer in terms of extracurriculars or resources available,” she said.

Odetunde said she still talks to many of the former prospective students—who are now sophomores at BC—who she mentored during the event her freshman year.

“It’s been amazing to see them grow,” she said. “Through SAP and the AHANA outreach community, I feel like I’m making an impact through forming connections and maintaining those connections and being a support and guide to those AHANA students that I found through AHANA weekend and sticking with them.”

Odetunde was also a freshman representative for the Black Student Forum, and her sophomore year joined the Bowman Advocates for Inclusive Culture, where she would help facilitate conversations about social justice in freshman dorms.

“I wanted to encourage students to become active members of their community and just affirm them that they do have power and a voice to make a change,” she said.

Odetunde has also been involved in the AHANA+ community in her position as a council member for 48Hours, a weekend retreat for freshmen hosted by the Office of First Year Experience. She said she had a good experience at 48Hours her freshman year, but realized that she was one of the only Black Muslim women in the space.

Odetunde decided to join the 48Hours council and encourage them to form a collaboration with the Compass Mentoring Program, a BC mentorship program that is geared toward AHANA+ students.

“The way that I saw my role within the space was finding ways to close the binary or the divide that tends to manifest itself on campus where we use this language of AHANA students versus non-AHANA students, which is just a washed-down way of saying white versus students of color,” Odetunde said. “It’s still perpetuating this idea of a binary of black versus white, leaving anybody who falls in between behind.”

Odetunde has also been active in the Black community outside of BC’s campus. In the summer of 2020, she conducted a research study on the identity development of Muslim African women, where she interviewed 10 women about how intersectionality plays a role in their lives.

“There’s not a lot of literature on the Black Muslim community as a whole,” Odetunde said. “That lack of visibility and resources made me feel invisible, where I feel like it’s one of the reasons I fell into a depressive state my sophomore year, because I just wasn’t seen in that way. So research was my way of gaining visibility and I think pioneering the conversation of the Black Muslim community here at Boston College.”

Another way Odetunde is combating the lack of visibility for the Black Muslim community is through creating Black Muslim TV, a platform created to allow Black Muslims to share their voices and experiences and to provide representation.

Odetunde said the MLK Scholarship feels like an affirmation of her genuine passion for her activism.

Her sophomore year, Odetunde said she felt she had spread herself too thin in terms of her involvement and activism. Since then, she has concentrated her efforts on where she believes she can have the biggest impact.

“I really had to take a step back to assess,” she said. “What does activism mean to me? What is my purpose and what change do I want to make? … That’s when I talk a lot about the Black Muslim community, because I feel like that is my niche, that is my purpose.”

Featured Image by Stephen Mooney / For the Heights

boston college mlk jr scholarship
Frelick, Pelio, and Morissette Poised To Lead BC Toward a Run at Omaha
Late Surge Pushes BC to Victory, Eagles Split Series With BU