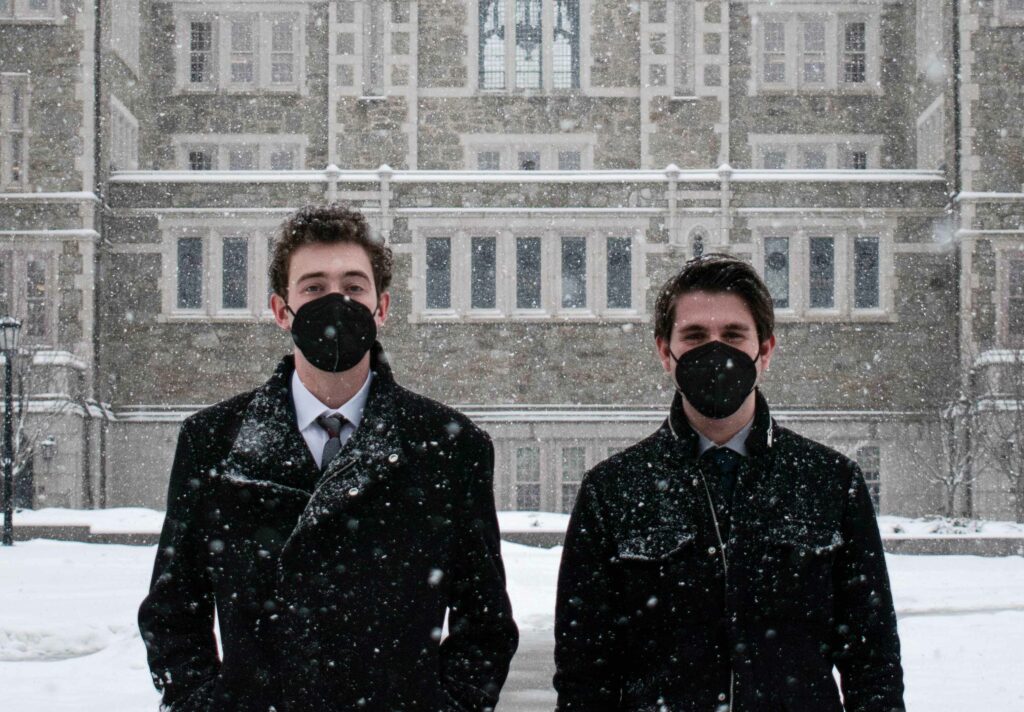 Though Spencer Sandusky, CSOM ’22, has never been involved in the Undergraduate Government of Boston College, when he saw an email about running for UGBC president, it caught his attention. He opened the email, read over the process of the election, and turned to his roommate, Ryan Kruft, CSOM ’23.

“I looked over to Ryan and said, ‘Hey, Ryan, you know how we were talking about some of the changes we want to make at BC? That seems like a good way to do it. You want to run with me?’” Sandusky said.

Sandusky and Kruft base their platform on a simple goal—listening to students. Their slogan, “For a Better BC,” reflects a drive to bring students’ needs from the University to fruition. Though neither of them is currently involved with UGBC, they think that an outsider’s perspective can bring fresh energy—and that starts by speaking to their peers, they explained.

After the two made the decision to run, they began asking students what change they wanted to see from the administration. Common themes emerged, and their campaign began to take shape.

“We’re talking to students, hearing what they have to say about BC administration’s policies,”  Kruft said. “And we’re really gonna try to be their voice and make the change that they’re telling us they want to see in the community.”

While Sandusky and Kruft admire many things about the University, the two believe that BC does not prioritize its students. At the forefront of their campaign, they emphasize that they want to push the school to put its students first. The two said they believe that BC has more interest in making its shareholders happy than fulfilling the needs of the student body.

The team also said that they don’t want this election to end up being a popularity contest, but instead want to ensure that students’ voices are truly heard.

“A lot of times people win elections based on, you know, how popular they are, how good they are at campaigning, rather than actually on the issues that matter,” Sandusky said. “So we want to make sure that, you know, when that inevitably happens, there’s still a way for the student voices regarding the issues to be heard. Because if not that, then why is anyone doing this? What’s the point if the student voice is being heard?”

Sandusky and Kruft have three sections under their broader platform: academics, student resources, and campus life.

Under the academics section, Sandusky and Kruft want to offer credits to students who participate in certain extracurricular activities, specifically ROTC and performing arts groups, building on the referendum already passed by the Student Assembly earlier this school year.

In terms of allocating credits, ROTC students and students in arts groups are the focus of their platform. The time and effort that is put into military science classes or preparing for a performance is enormous, Kruft said. Both Kruft and Sandusky are in the marching band—that’s how they met, they said. For years, members of the marching band and the director have been pushing, to no avail, for the school to give art credits for their time put in, Kruft said.

The student resources section of their platform includes their intent to push for LGBTQ+ and AHANA+ resource centers, transportation stipends, and request boxes for students to voice concerns to the administration.

For years, BC students have been pushing for an LGBTQ+ center. Though other candidates and campaigns in the past have had similar wishes and have seen no results, Sandusky hopes that through their current conversations with organizations and clubs, they can start to chip away at the administration. Though the two haven’t completely hashed out the specifics of their plan pertaining to an LGBTQ+ center, they said, they want to begin by getting the University to agree to the idea of a center and begin allocating funding towards it, they said.

Another way the two hope to realize their base goal—making the University put the students first—is by implementing physical and virtual request boxes. They want to give students a direct pipeline to the administration’s ears.

“It’s just a matter of saying, ‘This is what the students want, you’ve been inaccessible, you need to make yourselves available,’” Sandusky said.

Within their campus life section, a big ticket item Sandusky and Kruft want to push is breaking ground on a ramp to Upper Campus. They said they give the University and past UGBC teams credit where credit is due for the progress made so far, but believe that they can make further tangible strides.

“We want to get construction started,” Kruft said. “We want to maybe even get it finished by the time we’re out because the headway has been made—those inroads are there, we just need to get that final push to make it done.”

For campus life, the team says they want to provide better housing accommodations for non-binary students and make BC more welcoming to students with disablities, in addition to updating BC’s code of conduct and reforming meal plan policies.

The team will also advocate for a more streamlined housing process for non-binary students, an area in which they think BC is behind the times. They hope to create a housing pool for non-binary students which they believe will prioritize these students’ needs, and they also plan to push for gender neutral bathrooms on campus. They also want to give transportation stipends to students, especially Montserrat students, and help increase vegan and vegetarian options in the dining halls.

Though their list of desires is long—and some things, like an LGBTQ+ center, are longer term goals that might not be realized during their term—Sandusky and Kruft believe almost all of them can be attained during their tenure, they said.

“We plan to be very vocal, very present thought in the administration’s mind, and we’re going to be in communication with them every single day for as long as we need,” Sandusky said. “ … Because, again, we kept our policies simple for a reason, because we want to get them done.”

Benjamin Hetherington, MCAS ’23, helps run social media for Sandusky and Kruft’s campaign, focusing mainly on Facebook. A typical meeting, he says, consists of prioritizing policies and then brainstorming how to best present them to the student body.

Hetherington knows Sandusky and Kruft through the BC marching band and spoke to their natural ability to lead. He’s not at all surprised they took on the challenge of running, he says, and believes the two of them are extremely hard working.

“Spencer and Ryan are just very understanding and are willing to listen to people’s viewpoints,” he said. “ … No matter where the idea is coming from, they’re going to take it into consideration. I think that’s a big priority.”

One obstacle the pair has had to overcome is that they aren’t currently involved in UGBC.

According to Sandusky, not having inroads to the campaigning networks that UGBC provides has been difficult, as well as not having the same level of campaigning experience that the other candidates do. But they believe that the work they’ve put in campaigning so far has been successful and that an outsider view would give them an advantage stepping into the roles of president and executive vice president.

When asked why they should represent the student body as UGBC president and executive vice president, Sandusky and Kruft echoed their earlier emphasis on a students first mindset, saying they’re keeping things simple and straightforward to achieve their goals.

“We’re giving it everything we have to make the student voice heard, to get in the faces of the administration, open that dialogue, say this is what needs to happen,” Sandusky said. “And I think just our passion and dedication to making BC a better place is really what sets us apart.”