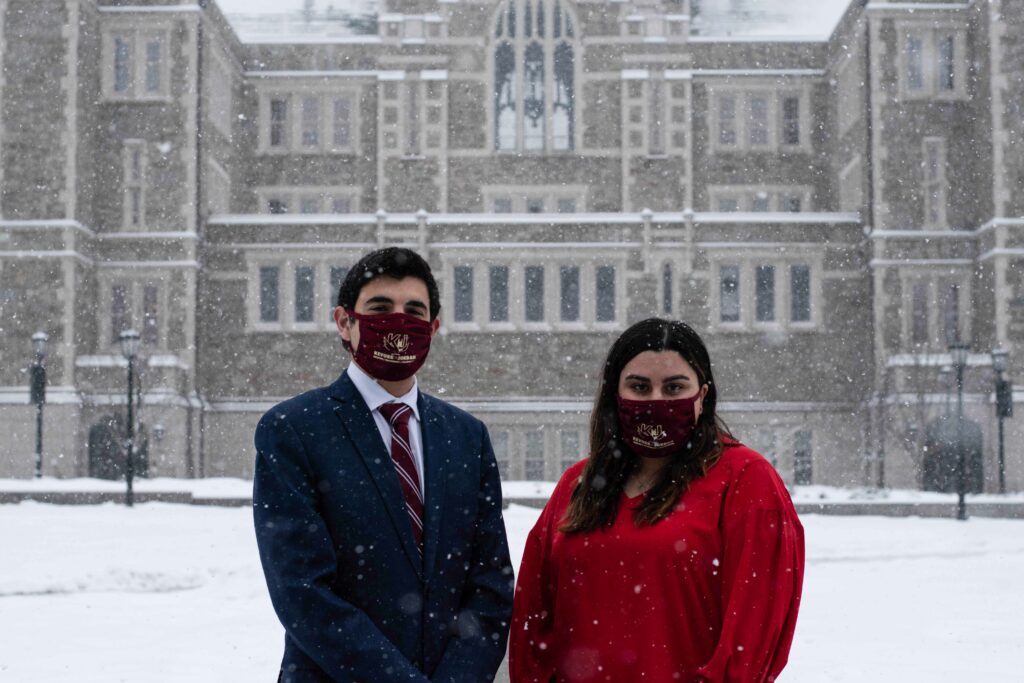 At an online information session for the Student Assembly (SA) of the Undergraduate Government of Boston College, current UGBC executive vice president Kevork Atinizian, CSOM ’22, decided to give the attendees his phone number to answer any lingering questions.

As an incoming freshman, Jordan Nakash, MCAS ’24, was unsure about joining UGBC, but she reached out to him for some more insight. After first developing a virtual friendship, then meeting for the first time at one of this year’s rare in-person gatherings for the Armenian Club, Atinizian and Nakash are now running for UGBC president and executive vice president, respectively.

Growing up in Belmont, Mass., Atinizian is a native of the greater Boston area. Having several family members born outside of the United States had a significant influence on his interest in politics as a child.

“For me, whenever you have so many family members who are not born in the United States, and they see you, you know, doing well in school, … [they tell you], ‘One day, you’ll be president,’” he said.

After receiving these repeated affirmations, he said, he began to realize that leadership positions were something he could see in his future. Throughout his educational career, he ran for numerous roles in student government.

He first became involved with UGBC when he ran for the senate his freshman year. After losing in this first attempt, he ran again his sophomore year and became a Class of 2022 senator. Now a junior, he serves as executive vice president alongside current President Christian Guma, CSOM ’21.

Nakash grew up in Kingston, Jamaica, and even from a young age, leadership roles were always on her radar, she said. In high school, she held the highest student disciplinary position, a role she had her eyes set on since elementary school.

Last semester, Nakash won a seat in the SA for the Class of 2024, receiving the most votes in the freshman class, she said. Nakash has already led several initiatives within UGBC, such as sponsoring the reimplementation of the grocery bus for Montserrat students.

The Atinizian-Nakash team is campaigning on a platform centered around three ideals—execution, transparency, and collaboration.

For Atinizian, execution means utilizing his experiences from his vice presidential term in order to lead effectively during the pandemic. This section also means ensuring that multiple divisions of UGBC are properly working in harmony, he said.

Nakash said that the main catalyst for their push toward transparency was that many students don’t know what UGBC actually does. The team hopes to continually communicate the details of its work to the student body by utilizing the UGBC website more often and continuing the weekly update videos, they said.

The last pillar of their platform—collaboration—deals with communicating with and listening to students, organizations, and the administration.

“If UGBC doesn’t do its job on that, then people will see UGBC as this vehicle that isn’t capable for that change,” Atinizian said. “Under our leadership … I know that it is.”

One of Atinizian and Nakash’s main goals is to increase awareness of student resources. They plan on distributing handbooks containing information on resources for certain student groups, such as first years, LGBTQIA+ students, and first-generation students.

“I think the best way to compile these is really getting students who are a part of that community … to find out all the resources on campus, the best things to know [about] where they can get support, where they can go to for help, the clubs that are available, the retreats, the meetings, everything that they can participate in, and put these in [books] and … having it really just available anywhere for the students,” Nakash said.

In the diversity and inclusion section of their platform, the team advocated for monthly open forums for students to discuss institutional change and facilitating a speaker series about identity and intersectionality.

Not only must UGBC have conversations with students affected by injustice, Atinizian said, but it also must collaborate with the administration in order to expand these conversations to the broader student body.

Following the racial unrest from this past summer, during his term as executive vice president, Atinizian focused on initiatives about race and injustice, student policies and conduct, the core curriculum, equity and administrative training, and equity and police training, he said.

Another way Atinizian and Nakash hope to foster a wider sense of inclusion on campus is by diversifying the resources for various religions on campus.

“One thing that I do definitely feel strongly about is … the advocacy for a full time Muslim chaplain as well as a rabbi, because I understand BC is … a Jesuit school,” Nakash said. “But it is also open to all religions, people of all faiths, even atheists … being able to have the chaplain or the rabbi on campus helps to make people who aren’t Catholic also feel at home.”

Caroline Brewster, MCAS ’24, joined the Atinizian-Nakash campaign on their diversity and inclusion team as the Council for Students with Disabilities (CSD) Coordinator because she believes they will make the most change on campus, she said.

“Their platform emphasizes inclusion, transparency and execution,” Brewster said in an email to The Heights. “UGBC, and BC as a whole, needs more of this. Kevork and Jordan’s actions alone this year have proven them to be leaders who follow-through with their promises.”

Their platform also touches upon a recurring issue students have with BC—the creation of an LGBTQIA+ center.

Atinizian said that, during his time as executive vice president, he has been pushing for a full-time LGBTQIA+ staff member.

“I think that having a full-time member there shows to members of the BC community that, ultimately, the queer experience matters and that queer students are supported,” he said.

At the end of last semester, UGBC began planning a case study competition to see how BC could best allocate a section of its budget toward divestment from fossil fuels, which small groups of students would then present to the administration, Nakash said. They plan on bringing this initiative to fruition.

Overall, the team hopes to implement these new initiatives while listening to student voices. To Nakash, the team’s slogan, “Here to listen. Here to learn. Here to lead.,” means leading the BC community by listening to and learning from students’ needs. This past year, with the first-year experience drastically impacted by COVID-19, Atinizian made an effort to directly listen to the ideas of the freshmen.

“Going to Mac at a random table and sitting down with the [freshmen] and asking them, you know, ‘What’s your experience like?’ and they’re talking with you about … HOOTs and HOWLs, what’s working, what isn’t working,” Atinizian said. “At the end of the day, you need a student government that listens, while at the same time, appropriately advocating and pushing the administration. … We’re the team that ultimately will listen.”

Compared to the other three teams, Brewster said, Atinizian—with an entire term’s worth of experience—and Nakash—with her fresh ideas as a freshman—are unlike the rest.

“Kevork’s experience as VP, and Jordan’s as a 2024 SA Representative, also gives them the knowledge to best navigate UGBC and lead this campus,” Brewster said in the email. “Our ticket is also unique, since Jordan is also a fellow freshman. This will help give UGBC a fresh perspective, and allow for more widespread class representation. Overall, their kindness, willingness to listen and dedication sets them apart from other candidates.”