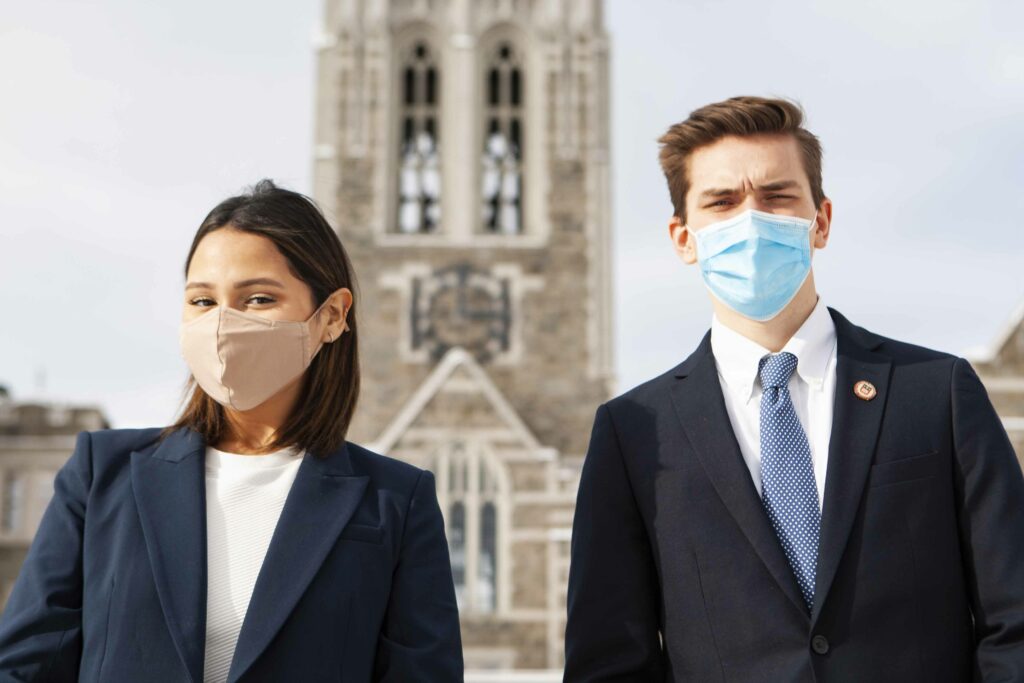 Jack Bracher, MCAS ’22, practically grew up on Boston College’s campus. Being the son of Courage to Know Director Elizabeth Bracher, he spent every Monday night during the summers from ages seven to 12 hanging out with incoming freshmen and orientation leaders. He and his brother also spent summer days manning a lemonade stand in Newton to raise money for BC’s inaugural Jamaica Magis trip.

“I saw myself in those students who were just entering BC,” Bracher said. “I was always impressed with how BC students carried themselves. And I really looked up to, you know, all those people I met.”

While BC was embedded in Bracher’s childhood, the Heights was unfamiliar territory for Gianna Russi, MCAS ’22, who did not step foot on campus until freshmen orientation. A Miami, Fla. native, Russi recalled watching YouTube videos about BC to get a sense of campus life. Despite having limited knowledge of the University, the Jesuit values drew her in, and she took what she described as a “shot in the dark” and enrolled.

Both Bracher and Russi, who are running for president and executive vice president, respectively, recalled feeling like outsiders once they got to campus.

Bracher, who had initially been waitlisted, felt himself questioning whether he truly deserved a spot at BC, he said. Russi, living in an unfamiliar place roughly 1,500 miles from home, often felt lost during her freshman year, which motivated her to want to help students feeling a similar way, she said.

The team has a combined total of five years of experience working across five divisions of the Undergraduate Government of Boston College with three leadership positions between the two of them, which Bracher said distinguishes them from other candidates. Their 14 policy areas are all backed by implementation plans, Bracher said.

Bracher became involved in UGBC through the Undergraduate Leadership Academy and Russi joined her sophomore year through the communications division. That year, Russi ended up working for Bracher’s 2020 campaign with Czar Sepe, MCAS ’21.

Although losing in 2020 was unfortunate, Bracher said, it also motivated him to work harder.

Russi’s experience working on Bracher’s campaign was one factor that led her to run to be a Student Assembly representative last semester, she said.

The team’s three-pronged platform—“Collaborative, Compassionate, Comprehensive”—defines their approach. As an AHANA+ student who grew up with immigrant grandparents, Russi realizes the urgency of working to make typically marginalized students on campus not feel like outsiders.

“It’s about truly getting into the students’ shoes and, you know, taking it to heart,” Russi said. “I can’t go around my day being fine and dandy, and then knowing that students don’t feel at home here, or students feel unsafe … we don’t take it lightly.”

With unparalleled experience in UGBC, both Bracher and Russi are well aware of the institutional red tape that often inhibits tangible change, they said. Along with the depth in their platform’s plans of attack on major issues, Bracher also stressed the importance of coalition building.

One major policy platform of theirs, he said, is their environment and sustainability plan.

“One of my biggest frustrations is when people just say, ‘Oh, we’re going to call on the University to divest,’” Bracher said. “There has to be something more than that.”

Their plan aims to centralize environmental advocacy on campus by creating an environmental and sustainability division within UGBC which will pressure the University alongside a broader coalition of environmental groups at BC. Simultaneously, their platform will pursue simple waste reduction initiatives, such as Boston’s Save That Stuff program, which turns waste materials into biofuel.

Also underscoring their platform, Bracher said, is their prioritization of keeping student voices—particularly those of marginalized student groups—at the center of their work.

They propose elevating AHANA+ Leadership Council (ALC), Council for Students with Disabilities (CSD), and GLBTQ+ Leadership Council (GLC) division heads to be part of UGBC’s Executive Council. Additionally, Bracher disagrees with the policy of the UGBC president choosing the Diversity and Inclusion (DI) director, and instead plans to hold a town hall where DI members will rank-choice vote for who they want to elect, he said.

Adin Henderson, co-chief of staff and MCAS ’21, has seen Bracher and Russi’s commitment to elevating voices through his role as co-president of the Black Student Forum, he said.

“I really appreciate Jack and Gianna’s openness to working and amplifying and using their position on UGBC as almost a megaphone to help kind of signal boost all the activism and advocacy that’s already going,” he said.

Institutionally, especially in light of the recent hate crime on the Multicultural Learning Experience floor, their proposal requests a social worker who can respond to non-medical incidents instead of the Boston College Police Department.

In line with their goal to make attainable promises with tangible action plans, their platform outlines the creation of an LGBTQ+ community center in Carney Hall where students can feel comfortable alongside other students that resonate with their experiences, Russi said.

Bracher said that while accessibility for disabled students is often neglected, their comprehensive plan makes them stick out the farthest from other teams, Bracher said.

Their plan includes the creation of a terrace leading up to the steps of McElroy Commons and an elevator from College Road side to the top of Fitzpatrick and Gonzaga Hall.

While the team is striving to make institutional changes, every UGBC term is only one year, Bracher said. In order to use their limited time efficiently, the plan will include monthly meetings for the coming summer during which each UGBC division will lay the groundwork for what they need to accomplish during the school year, he said.

At the end of the day, although Bracher and Russi are extremely aware of the challenges of changing campus culture and reforming the way UGBC operates, they are committed to doing everything in their power to create change at BC, Russi said.

“Jack and I really are ‘yes’ people,” Russi said. “I’ve rarely heard the word ‘no’ come out of Jack’s mouth, and I usually say ‘yes’ to everything … We really go out of our way to make sure students’ voices are heard, because at the end of the day … that’s not just our job … that’s our passion, and we want to be there for students.”