Home » Nyeema Morgan’s Art Merges the Past With the Personal
Arts, On Campus

Nyeema Morgan’s Art Merges the Past With the Personal

From her home studio in Chicago, artist Nyeema Morgan spoke with professors Hartmut Austen and Greer Muldowney about her interdisciplinary artwork, which merges history, philosophical thought, and culture with unique materials, on Thursday. The virtual event, hosted by the art, art history, and film departments, was part of the Currents lecture series, which explores the work and ideas of local creators.

Morgan said her work is inspired by philosophical conflicts and observing how everyday encounters are captured in images. She said she utilizes physical copies of texts in her creations such as pages from books, selections from newspapers, or copies of recipes to reflect on personal and cultural economies of knowledge. Morgan’s work, which ranges from large-scale drawings to sculptural installations to print-based media, has been highlighted by The Wall Street Journal, Time Out New York, and The New York Times.

“I make my art as a form of expression—a manifestation of ideas, thoughts, and questions intended to be received by an audience,” Morgan said.

The ambition behind Morgan’s work is to raise questions about how we articulate and construct meaning within a complex system of socio-political relations. She analyzes history and the power struggles that have taken place over time to offer a cultural critique. She said she hopes to challenge the boundaries of authoritative reasoning through her art.

Raised in Philadelphia, Pa. by two artists, Morgan said she attributes much of her contemporary and unconventional artistic vision to being surrounded by a variety of art forms from a young age. While she creates sculpture work and engages in printmaking, she said her ultimate artistic passion resides in drawing—which she describes as “the delineation of space.” Behind every piece she creates, Morgan said, is a series of observations and questions about the world, which result in an array of diverse works.

Morgan said she is also fascinated by the concept of language and dialogue and how we communicate with each other. She said she attempts to present the truths of history, which she sees as a “series of significant stories,” to understand how those stories function in our lives. Morgan said she brought this concept to life in one of her most recent exhibits at the Boulder Museum of Contemporary Art titled THE STEM. THE FLOWER. THE ROOT. THE SEED. While creating the piece, she was asked to channel themes of female empowerment from women’s suffrage to female agency as artists.

While speaking with Austen and Muldowney, Morgan highlighted her piece called The Flower, which is a part of her exhibit. Eight individual statues hang against the wall, each depicting pairs of hands holding white wooden poles with large newspaper sheets hung over each pole. These wall hangings encircle viewers when they stand in the middle, surrounding them with the stories these hands hold out. The viewer can take one of these sheets from the staff with them. When opened, they will reveal a composition of texts and stories about the lives of women, both fictional and real.

Many of Morgan’s pieces take on a sentimental meaning, like her series of drawings entitled Forty-Seven Easy Poundcakes Like grandma Use To Make. In this series, she layered her grandma’s pound cake recipe with 46 other recipes found from Google searches, creating a blend of text.

Morgan said she likes to use discrete and subtle techniques to display deeper messages in her work. She will include hidden texts in some of her vinyl works, such as Soft Power. Hard Margins., which appear as light shines on the vinyl from different angles. She will often include the shadow of herself producing a drawing in some of her works as well as casts of her own hands to cultivate a connection with the viewer.

With every new idea or creation, Morgan said she asks herself what she requires of her audience and what they expect from her in return.

“I hope to break free of the comfortable ways of working,” Morgan said.

After years of exploring her artistry, Morgan said she is still trying to discern her place in the world of art and art history. She said she understands that art history confined the contributions of Black artists, particularly Black women, to a narrower field of influence. But, Morgan also said she recognizes the reality of this history and uses it as motivation to inspire future change through her work.

“I am continuously inspired how a work of art can transcend the era that it was made and how we understand it functioning in the present moment,” Morgan said. 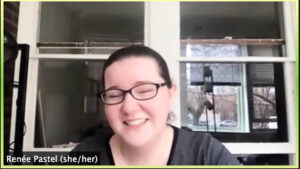