We are living in the age of the personal brand. Whether it be securing a spot at an elite university or receiving a lucrative job offer, our educational and professional aspirations are increasingly tied to our ability to craft specific, targeted personal images. For example, we are told to “tell a story” in our college application and to vigorously pursue a few extracurriculars rather than dabble in 10 of them. Additionally, we are told to curate our online presence through networking sites like LinkedIn and Eagle Exchange. While our aim to craft consistent brands is often well-meaning, what happens when we sacrifice our innate curiosity in this pursuit? Ultimately, is there something to be said for being a jack of all trades—even if one is a master of none? To find out, we can perhaps look to an unlikely source: the eccentric artist David Bowie.

Over the course of his career, Bowie inhabited many personas in a perpetual act of self-reinvention and artistic evolution. For our purposes, let’s focus on three of his best-known characters—Ziggy Stardust, The Thin White Duke, and, while not a specific persona per se, what I will call Berlin-era Bowie. By following these characters’ stories, we will investigate Bowie’s evolving ideological and artistic inclinations and try to pin down the real “Bowie brand.”

On June 16, 1972, Bowie released The Rise and Fall of Ziggy Stardust and the Spiders from Mars—a concept album that traces the arrival of an androgynous alien rock star sent to save Earth from an impending apocalypse. Through the Ziggy persona, Bowie glorified sexual liberation and rebelled against the status quo. In other words, the Ziggy persona allowed Bowie to challenge the prevailing gender norms of the time. Bowie’s Ziggy character is perhaps not so much an alter ego as it is an expression of his authentic ego—someone freed from societal norms and expectations. This optimistic attitude, however, would not last.

On Jan. 23, 1976, Bowie’s 10th studio album Station to Station was released. The opening lines of the ominous first track announce the arrival of Bowie’s darkest persona. In the titular track, Bowie sings, “The return of The Thin White Duke / Throwing darts in lovers’ eyes.” Leaving behind Ziggy’s idealism and the liberated gender politics of glam rock, Bowie turns to inhabiting the cynical, cold-hearted Thin White Duke. Fueled by his spiraling cocaine addiction and flirtations with the occult, the album is a haunting soundscape of paranoia. Troublingly, Bowie also expressed sympathy for fascism during this time period. Although Bowie would later wholly disavow these views and express regret for his erratic behavior—calling the Thin White Duke a “nasty character indeed” and these times “the darkest days of my life”—Bowie’s behavior during this period is still a stain on his career and reputation. To escape the abyss, Bowie would travel to Berlin—with an equally drug-addicted and mentally unstable Iggy Pop—where he would experience an artistic and spiritual rebirth.

On Oct. 14, 1977, Bowie released Heroes, the second release of his famed Berlin Trilogy which also includes Low and Lodger. Inspired by the German electronic scene and with contributions from the ambient music pioneer Brian Eno and King Crimson guitarist Robert Fripp, Bowie and his producer Tony Visconti would craft one of his best albums. Although the dark, industrial soundscapes of Station to Station resurfaced on this album, Bowie’s lyrics were imbued with vitality rather than soulless paranoia. Take the titular track “Heroes” for example. The themes of hopeless romanticism and the possibility of true love “just for one day” come from Bowie witnessing his producer embrace his lover next to the Berlin Wall. With Heroes, Bowie enters another chapter of artistic reinvention which coincides with his spiritual renewal and triumph over his cocaine addiction.

Throughout the rest of his career, Bowie would create more characters in his relentless pursuit of self-knowledge. Let’s Dance sees Bowie don a sleek satin suit under the “serious moonlight”; Scary Monsters (and Super Creeps) resurrects Major Tom; and—in a final act of performance art—Bowie declares himself a “Blackstar” on the studio album by the same name, released two days before his passing. Bowie’s artistic reinventions weren’t contrived. They were part and parcel of his exploration of the many facets of his personality. What emerges from a study of Bowie’s characters is not a wholly good or bad man. It is a human being with virtues and vices, strengths and weaknesses.

As professional success becomes increasingly predicated on our ability to construct viable, polished brands, I am worried we are losing sight of the path to self-knowledge. Unless we indulge our curiosity and satisfy our itch for exploration, how can we know our true selves? True authenticity is found not by stagnancy but continual reinvention. 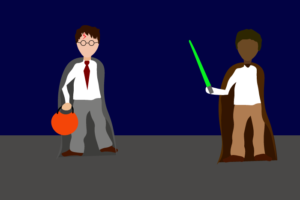