The puck is set to drop for the men’s Hockey East Tournament beginning on Wednesday between Vermont and UMass Lowell as well as New Hampshire and Maine. Sports editors and beat writers from student newspapers around the Hockey East join Heights sports editor Emma Healy in a roundtable discussion of the tournament. Panelists include Cam Smith from The Cowl at Providence, Tim Keaten from UConn’s Daily Campus, Charlie Moore from Boston University’s Daily Free Press, Noah Bortle from UMass’ The Massachusetts Daily Collegian, and Cameron Beall from The New Hampshire at UNH.

Since 2015, the opening round of the Hockey East Tournament has been a best-of-three series. This year, the league has gone back to a single-elimination tournament, which makes every game count more. What do you see as the advantages and disadvantages of returning to a single-game format?

Charlie, Boston University: Obviously, hinging an entire season of hard work on one game will be a tough pill to swallow for whichever team doesn’t come out on top. That being said, a single-elimination format is the perfect cherry to top such a peculiar season. BU will relish a first-round bye, where head coach Albie O’Connell and the coaching staff can best prepare their squad for the strongest single-game performance possible. BU has been beating opponents all season on much shorter notice, so this won’t be so out of the ordinary. The Terriers are 4-3-1 when playing a team for the first time but 6-0 in the second game of a two-game series, so preparation will be the best path to victory in round one.

Cameron, New Hampshire: This year’s single-game performance will certainly favor a lower seed such as UNH. The Wildcats are the 10th seed in the Hockey East but have put up a fight against some of the conference powerhouses this season. If the team’s stars, such as junior forwards Angus Crookshank and Jackson Pierson, can find their stride quickly, the single-elimination format definitely gives UNH more hope than the Wildcats would have in a best-of-three series.

What do you see from your team that’s encouraging heading into the postseason?

Noah, UMass: UMass came off a two-week pause and immediately responded with wins over Providence by a score of 8-1 followed by an overtime win over then-No. 1 Boston College. Though the Minutemen lack the top-end scoring they had a year ago, the likes of Carson Gicewicz and Bobby Trivigno are helping buoy the offense.

Emma, Boston College: BC has 11 skaters in double-digit points this season, including two defenders. With Spencer Knight—who’s second in the Hockey East in goals-against average and save percentage—in goal, the Eagles don’t have too much to worry about on the defensive end, which only increases the depth up top. Matt Boldy leads the Eagles with 10 goals and 24 points, but he’s far from alone on the attacking front. Marc McLaughlin follows him with 23 points on the season, and Jack McBain and Nikita Nesterenko have 19 and 18, respectively.

Having so many offensive threats is potentially the Eagles’ biggest strength. Each line is as strong as the next, though the sophomore line of Boldy, McLaughlin, and Alex Newhook has stood out the most. But the Eagles have shown that goals can come from anyone, which makes it that much harder for opposing defenses to prepare.

Tim, UConn: The biggest thing I see from the Huskies that I think is really encouraging heading into the postseason is the downward trend in penalties from dirty hits. UConn plays fast and rough, which creates holes in its defensive line. Early in the season, that pattern led to the Huskies taking penalty after penalty, allowing the opposition to exploit the Huskies’ penalty kill and score easy points. As the season has gone on, it is obvious that head coach Mike Cavanaugh has been drilling the team on how to correctly play such a style, leading to UConn taking fewer unnecessary penalties. If the Huskies can play a clean game while sticking to this aggressive style of play, I think the team will punch well above its weight class and compete with the nationally ranked squads.

What weakness do you see from your team that opponents might look to capitalize on, and which team do you think will present the most problems for your team?

Emma, BC: Prior to BC’s Feb. 26 overtime loss to then-No. 9 UMass, the Eagles had been riding a four-game win streak, outscoring their opponents 18-6 in that period. The Eagles then jumped out to a 2-0 lead against the Minutemen, which was encouraging for the continuation of their Hockey East dominance. But literally seconds after Nesterenko put the Eagles up by two, UMass responded, and suddenly, the Eagles looked deflated. The Minutemen snuck out an overtime win, and it showed one of BC’s few weaknesses.

The Eagles have shown a pattern this season of losing momentum at key turning points in games. After two periods against UConn, BC led 2-0 but allowed three third-period goals to send the game to overtime, and the Huskies won in a shootout. Just one late goal took the wind out of BC’s sails, and if the Eagles want any chance in the postseason, they’ll have to keep their heads on straight in the face of adversity.

Charlie, BU: Second only to Vermont, BU has played the fewest games (14) among Hockey East teams. Additionally, BU is the only squad to make its season debut in 2021, as opposed to before winter break. Opponents can look to capitalize on BU’s game inexperience as a unit on the ice. Team points leader David Farrance, captain Logan Cockerill, and freshman goaltender Drew Commesso have all recently returned from injury, and teams may further look to exploit BU’s lack of time on the ice as a result.

The Terriers’ three losses this season came at the hands of Providence in the season opener, BC in a last-second overtime heartbreaker, and a 2-5 loss to Merrimack. Although the Terriers rebounded from all three losses in each respective game two, they must be wary of having a bad first game. BU also did not play New Hampshire or No. 20 Northeastern this season. A matchup with either team will be uncharted territory for both squads, and although BU is ranked No. 9, college hockey has a flair for the dramatic, especially in a single-game elimination format.

If your team’s first-round matchup is set, what are you expecting to see from your opponent?

Cam, Providence: UConn and Providence are well acquainted with each other. The Huskies won the season series 2-1, with the most recent game being the two teams’ season finale. In that game, UConn jumped out to a 5-0 lead thanks to three first-period power-play goals from Jachym Kondelik. There’s no doubt that the Huskies’ offense will be ready to go entering the first-round matchup. Look for the Huskies to continue to produce strong power-play results, led by the smooth stick of leading scorer Jonny Evans.

Noah, UMass: Northeastern is a team that UMass has had no trouble with this season. A sweep earlier in the season saw the Minutemen win 4-3 and 5-3. Though UMass swept the regular season series, the games were close, and Northeastern possesses as much top-tier talent as any team in the Hockey East. The hope for the Minutemen would be that their defense plays better against the Huskies than the three goals they gave up in each January matchup.

Cameron, UNH: Maine is a team that the Wildcats kept in check in the opening weekend of their season. Maine beat out UNH in the Hockey East Power Index, and despite losses throughout the season, the Black Bears put up a lot of points in those losses. UNH should expect a lot of shots on net. Conversely, top UNH point scorers such as Crookshank and Pierson need to try and do the same to give their offense a shot to hang in.

For your team to go far in the tournament, which player do you think has to be the biggest performer and why?

Tim, UConn: It is hard to understate the impact that junior forward Evans has on the team. Leading the Huskies in goals scored and points earned, Evans has been a powerhouse on the ice. Earning 1.27 points per game this season, he has been able to provide UConn a consistent performance that allows them to punch above its weight class. Evans not only puts up numbers as a goal scorer, but also is a proficient playmaker to set up assists. Second on the team in assists, the forward looks for passes in the offensive zone and sets up the Huskies for success. UConn is full of very talented players, and every single one is important for the team’s cohesion, but Evans aims to make sure you know he is playing and putting numbers on the board.

Cam, Providence: The easy answer here is forward Tyce Thompson. The New Jersey Devils draftee has spearheaded the Friars’ offense to the tune of 10 goals and 12 assists. Thompson will certainly be vital to Providence’s success in the tournament, but I believe the real X-factor for the Friars will be goalie Jaxson Stauber. Since taking over as starting goalie in the third game of the season after PC’s embarrassing 9-0 loss to BC, Stauber has excelled. For Hockey East goalies with over 1,000 minutes played, he has the second-best goals against average (2.21) as well as the second-best save percentage (.915) only behind BC’s Knight. Perhaps most importantly, he provides stability between the pipes, as the Friars came into the season uncertain if they would find a go-to goaltender from their group of goalies. Thompson is on track to continue his hot streak, but for Providence to succeed, Stauber will need to keep up his stellar play against some of the most vaunted offenses in the country.

You can reach some of the panelists on Twitter for more information. 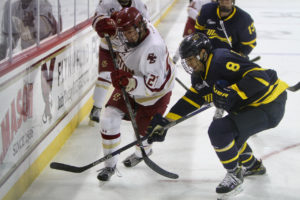 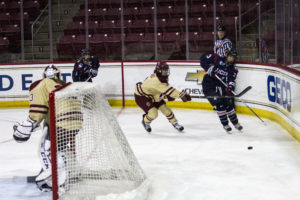