Assistant professor of communications Renée Pastel presented her lecture “Fact-Checking Fiction” March 11 as part of the ongoing Currents lecture series hosted by the McMullen Museum of Arts and the art, art history, and film departments at Boston College.

Drawing from her studies in film and media, Pastel’s lecture examined television’s portrayal of the past. Pastel also highlighted the modern interest with fact-checking events portrayed in television shows. She calls this subculture of television watching “second-screen viewing.” Second-screen viewing is the act of using two screens while watching a program, one to watch the program and one to interact with social media.

“Within the contemporary historical context of media oversaturation and generalized anxiety about distinguishing fact and fiction, the instinct to fact-check fictionalized accounts of historical events is intensified, opening space to consider once again the question of media contribution to collective memory and the truth-telling potential of fiction,” Pastel said.

She presented three case studies of recent American television series: GLOW from Netflix and Boardwalk Empire and Chernobyl from HBO. All of these series portray historical events, but with various aims of narration and different commitments to historical accuracy.

In GLOW, Pastel said the presentation of 1980s America is relegated to the characters’ wardrobes and winks in the dialogue that reveal how much attitudes have changed when it comes to stereotypes about race, class, and gender and concepts of progress. The historical setting remains as a backdrop for the main narrative, as the need for dramatic reality completely supersedes the need for historical reality, Pastel said.

In contrast, Boardwalk Empire, which follows a cast of 1920s American gangsters, goes a step further in weaving history with fiction—with fictional characters taking center stage over historical figures. Apart from its careful portrayals of real people, such as mob boss Al Capone, the story deliberately diverges from history, slightly changing the names and actions of historical figures so the creators of the show can take creative liberties, Pastel said.

Chernobyl, on the other hand, aims to accurately dramatize the events surrounding the nuclear catastrophe at the Chernobyl Nuclear Power Plant in 1986. In its first scene, the show opens explaining that “if we hear enough lies, then we’ll no longer recognize the truth at all.” This line, Pastel said, is a narrative invitation to fact-check, encouraging viewers to learn the true history by comparing it with the show’s interpretation.

After the lecture, assistant professor of art history Kevin Lotery facilitated a Q&A session with Pastel and the audience. During this section, Pastel elaborated on how fiction tells a different truth than formal retellings.

Regardless of historical accuracy, Pastel said the narratives of the past presented by television undoubtedly mold the collective historical memory of the audience.

“Television has influence on memory partly because of its ‘present-tenseness,’ not just as a source of memories, but also as a medium with ongoing presence,” Pastel said. “Television represents a certain consistency in our lives. Its 24-hour ‘real-timeness’ parallels the real-timeness of the real world it represents. Television now provides a backdrop, or even a background consciousness, to history.”

According to Pastel, this constant presence coupled with convenient, satisfactory packaging of events into a structured narrative have rendered television the primary way that people of all ages form their understandings of the past, transforming the way they think about historical people and events. 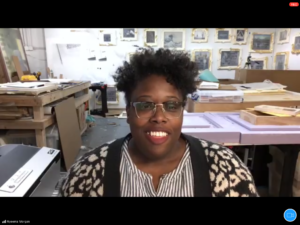