Lil Nas X released his new single and music video premiere for “MONTERO (Call Me By Your Name)” on Friday. Unapologetic, direct, and creative, the video is a reflection of Lil Nas X himself. It’s defined by its playful use of religious and historical concepts to tell a story of the battle of sin and pleasure. This struggle is portrayed in a way that leaves viewers’ jaws dropped—but that could just be due to the scene where Lil Nas X gives a lap dance to the devil.

The video begins with a short voiceover by Lil Nas X as he says, “In life, we hide the parts of ourselves that we don’t want the world to see. We lock them away. We tell them no. We banish them. But here, we don’t. Welcome to Montero.” The viewer is then introduced to the world of Montero, which is also Lil Nas X’s real name, Montero Lamar Hill. In the music video, this world is presumably a replica of the Garden of Eden, where Lil Nas is shown eventually giving in to the temptation of kissing a serpent.

From there, he’s transported to a kind of purgatory that gives off Hunger Games vibes—it’s a distorted dystopia where Lil Nas X is stoned to death for his sin. Choosing hell over heaven, Lil Nas confronts the devil by giving him a lap dance before he kills him and takes his horns for himself.

Though wild, unpredictable, and at times laugh-worthy, the music video speaks to a lot of important themes. The song tackles Lil Nas X’s emotions while dating a closeted man, making it clear to him that while he doesn’t support the decisions he makes, he’ll continue to be by his side. The video is a statement of Lil Nas X’s confidence in his sexuality and his desire to be seen as a beacon of hope to people in and outside of the LGBTQ+ community. 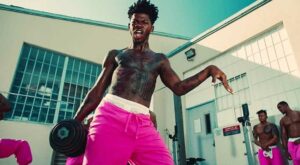