Alex Newhook, forward for Boston College men’s hockey, has joined the exodus of his sophomore cohort as the most recent Eagle to sign a professional contract. Newhook announced his signing with the Colorado Avalanche on Wednesday.

The Avalanche drafted Newhook at No. 16 overall in the 2019 NHL Draft, and he signed a three-year, entry-level contract. He will join the Avalanche’s American Hockey League affiliate team the Colorado Eagles.

Newhook missed the first half of the 2020-21 season for BC while quarantining and training for the 2021 IIHF World Junior Ice Hockey Championships in Edmonton, Alberta, where he helped Team Canada to a silver medal finish. In just 12 games this season, Newhook recorded 16 points.

His freshman season, however, is when the forward really made his name known. Newhook was named BC’s first ever NCAA Division I Rookie of the Year after tallying 42 points and leading all NCAA freshmen in goals (19), game-winning goals (4), and short-handed goals (3).

Newhook joins Matt Boldy, Mike Hardman, and Spencer Knight as the Eagles’ latest departures. The sophomores have all announced their departures to the professional leagues in the last two days since BC’s heartbreaking loss to St. Cloud State in the NCAA Tournament Regional Final on Sunday.

Rookies signed to entry-level contracts can play up to six games this spring before their contracts go into effect in July without losing any eligibility. 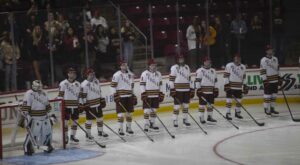