Katherine E. Gregory will take over as dean of the Connell School of Nursing on July 1, according to a University release. Gregory currently serves as the associate chief nursing officer for women’s and newborn health, research, and innovation at Brigham and Women’s Hospital.

Gregory, who was previously an associate professor in CSON and is currently an assistant professor of pediatrics at Harvard Medical School, will replace Susan Gennaro as dean. Gennaro is stepping down from the post after 13 years and will remain on the school’s faculty, a release announcing Gennaro’s departure said.

“Boston College has a long history of preparing nurses who make a difference, whether they serve at the bedside, in the classroom, as scientists developing new knowledge for practice, or as leaders in their local and global communities,” Gregory said in the release. “… As dean, I plan to partner with many others, successfully contributing to the mission of Boston College and leading the Connell School through the opportunities and challenges that lie ahead.”

Gregory will return to CSON, where she received her doctorate in 2006, after a career pursuing innovative lab work, working in hospital leadership, and educating a generation of health care workers, the release said.

In her 25 years as a nurse at Brigham and Women’s Hospital, Gregory rose from a staff nurse in the newborn intensive care unit to associate chief nursing officer, where she oversees a staff of approximately 700 nurses and clinical personnel, the release said.

In her position at Brigham and Women’s, Gregory has worked closely in partnership with CSON, according to Colleen Simonelli, a member of the dean search committee and associate dean of undergraduate programs in the Nursing school.

“With her vision for creating a more diverse, inclusive, and equitable nursing workforce, Kate is uniquely positioned to advance the mission of the Connell School,” Simonelli said. “Bringing together our clinical and research faculty with our colleagues and partners across campus, I am confident Kate will lead us to new heights.”

As a researcher, Gregory has secured funding from both the National Institutes of Health and National Institute of Nursing Research from 2003 through 2024, according to the release. She also helped establish BC’s Haley Nurse Scientist Program in 2009, which funds scholarly activities of both CSON faculty and clinical nurses at Brigham Women’s Hospital.

Gregory serves as an assistant in biology in the Mucosal Immunology Lab at Massachusetts General Hospital and as a senior scientist in pediatric newborn medicine at Brigham and Women’s, according to the release. She is also the editor of Journal of Perinatal and Neonatal Nursing.

Provost and Dean of Faculties David Quigley said in the release that Gregory’s experience as a nursing leader and previous time at BC makes her well prepared to serve as dean.

“As someone who did her doctoral work here and then served on the faculty, Kate speaks powerfully about what makes Boston College such a special place,” Quigley said. “Her impressive research program, the leadership she has provided at Brigham and Women’s Hospital, and her innovative approaches to nursing education and scholarship make her the ideal candidate to guide the Connell School starting this summer.”

Christopher Lee, member of the dean search committee and associate dean for research of CSON, said Gregory’s forward-looking focus makes her the right leader for CSON.

“Dr. Gregory has a strong and forward-looking vision for the future of the Connell School that will preserve the Jesuit, Catholic traditions that were formative in her own education,” Lee said in the release.

Gregory said her vision for CSON is to prepare nurses that look to improve human health in many different ways.

“As dean, I will work closely with the community of the Connell School and Boston College, as well as with leaders across Boston and beyond, to ensure that we prepare nurses to serve patients, families, and communities in many capacities, but always as people for others,” Gregory said.

Featured Image by Nicole Vagra / For the Heights 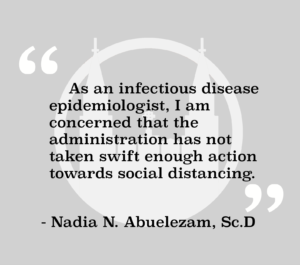