What does 200 million dollars look like? For the Isabella Stewart Gardner Museum in Boston, this massive sum takes the form of 13 works of art, which were stolen by two thieves three decades ago.

On March 18, 1990, a pair of men dressed as police officers entered the Isabella Stewart Gardner Museum after hours declaring they had received a complaint. Seemingly unaware of their true identities, night guard Richard Abath let them in, and what ensued became the greatest art heist in American history—one whose culprits walked away without leaving behind a single lead.

Through Netflix’s latest docuseries, This Is a Robbery: The World’s Biggest Art Heist, director Colin Barnicle reopens this case and delves into what exactly happened on that fateful night and the numerous investigations, accusations, and theories that bloomed from the yet-to-be-solved crime.

Though some of the stolen pieces are quite famous and therefore are obvious choices—like Rembrandt Harmenszoon van Rijn’s “The Storm on the Sea of Galilee”—others are more perplexing, such as a bronze finial from a Napoleonic flag worth “about 20 bucks” according to Barnicle. The stolen paintings were also cut from their frames rather than simply taken out, and the mountings still adorn the walls of the museum today.

Having grown up in Boston, Barnicle has known about the robbery his entire life.

“A lot of people in Boston kind of heard about [the robbery] growing up,” Barnicle said in an interview with The Heights. “And it was one of these, you know, true whodunit mysteries in our hometown.”

To put the docuseries together, Barnicle interviewed countless sources, from those who worked at the Gardner to those implicated in the investigation. When trying to find hard evidence on the heist, however, Barnicle encountered a lot of obstacles. None of the information from the 1990 investigation was digitized since no formal arrests related to the case were made, so Barnicle had to take a bit of an analog approach to conduct his research.

“Working around it meant like getting files from Norfolk County Courthouse,” Barnicle said. “And you can only go into a room and swipe through them for an hour.”

After a few brief interviews with firsthand witnesses, the first episode of the docuseries dives into what makes the museum so great in the first place—in other words, why should we care that a bunch of art was stolen?

The founder, Isabella Stewart Gardner herself, is a source of interest for the docuseries. She planned everything regarding the museum’s architecture, down to the acoustics played throughout the museum.

Beyond Gardner, personal testimonies featured in the documentary detail how the museum seems to invoke a surreal love of art within everyone who visits it, and the various interviews Barnicle includes in this episode are enough to make viewers believe art can be transcendent.

Anne Hawley, the director of the museum at the time of the heist, expressed her love for the site in one of the first interviews of the series. Her passion for the Gardner flows out of her, helping the viewer better understand the world she describes stepping into with every visit to the museum. Her interview plays over shots of the building itself, which showcase the ring of exhibits scaling three floors and enclosing a luscious courtyard at its center.

“It’s such a beautiful environment that you go to another place,” Hawley said in the first episode. “I like to call it the ‘a-ha moment’ or the ‘epiphanic moment’—which is a little too heady to say.”

This same love resonates deeply with other staff members. Former guard Karen Sangregory said to this day she “still has dreams about the Gardner Museum.” After speaking about some of her favorite aspects of the building, namely its masterful architecture, the docuseries shifts to Sangregory recounting her arrival to work the morning the crime was discovered.

But, Barnicle does not focus only on those who loved working at the Gardner. His interviews profile people who, perhaps like some potential viewers of the series, felt somewhat indifferent toward the museum. Abath, for example, was the night guard who let the robbers in. Though he worked at the Gardner, he wasn’t filled with the same passion Sangregory or Hawley carry into their interviews. His role in the historic heist actually led to an entire theory that the theft was an inside job, as he had been known at the time for disagreeing with the efficacy of the museum’s security policies.

Myles Connor, a known art thief from Boston, was another prime suspect at the time. Barnicle named Connor as one of his favorite people to interview because of all his eccentricities.

“He is a member of Mensa. He lives with a horse. He owned an alligator. He played with Roy Orbison and The Beach Boys in his band,” Barnicle said. “He’s robbed like millions and millions of dollars worth of art, but he’s also extremely knowledgeable about art.”

The first episode only scrapes the surface of everything the docuseries encompasses. As more and more of the nitty gritty details are exposed, Barnicle dives into the heist’s connections to the Boston Mafia at the time. As the story picks up, the plotline becomes more complex, but so does Barnicle’s methods of telling it. By inserting timelines and other creative visuals to illuminate the actual facts of the heist as well as the many theories, Barnicle keeps the audience engaged and informed as the story gradually unfolds. When Barnicle describes the robbers’ route through the museum, for example, he uses a 3D model of the Gardner to show exactly which rooms the two thieves visited and where they were in relation to each other.

“We really want to be able to take people through it almost like an Agatha Christie novel,” Barnicle said. “You’re going through the investigation, instead of being told about the investigation.”

Through beautiful, Steadicam shots of the exhibit and intense string music, Barnicle helps viewers understand the excitement of the heist and the passion the Gardner’s faculty must have for retrieving the stolen works, both three decades ago and today.

“There’s no verdict. There’s no evidentiary finding. There’s no arrest,” Barnicle said. “In this case, you can’t file a Freedom of Information Act for anything having to do with the case, because there’s no adjudication on it whatsoever. So it’s like a black hole.”

Even without a solid verdict, This Is a Robbery brings the sensationalized art heist to life. The docuseries has something to excite every viewer, from fans of the mobster movie The Godfather to die-hard art buffs. Barnicle makes this black hole one worth jumping into. 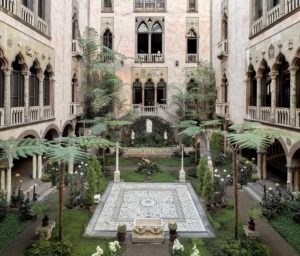 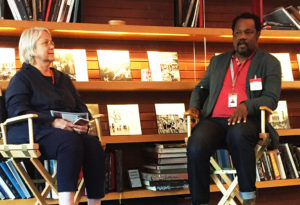