Ott: College baseball should be the testing ground for rule changes.

Over the last couple of years, the MLB has attempted to increase its appeal through a number of pace-of-play ordinances. As professional sports such as football and basketball have recently become more popular, baseball seems to have remained stagnant, leading some to claim that the MLB is dying.

College baseball is not dying. It’s already lifeless in an iron casket buried thousands of miles underground, coming up for air every once in a while when people get bored enough of March Madness and college football to wonder why college baseball is so irrelevant.

Things might seem hopeless, but they don’t have to be.

Baseball is still one of the most popular sports in America. College baseball has the potential for similar widespread appeal, but it has not lived up to it. College basketball and football are both popular in their own right because, compared to their professional counterparts, they are faster paced, can feel more authentic, and fans can watch players develop.

Baseball fans have a difficult time watching players develop to a professional level in their college years, as even top prospects tend to spend years in the minor leagues. Still, college baseball could take steps to make itself stand out from its professional counterpart.

While college baseball games are already shorter than MLB games, the difference is not enough to attract fans. Baseball is a fundamentally slow game, but little changes can make a difference. One change could be a rule that the MLB has already adopted: starting extra innings with a runner on second. The NCAA gave conferences the option to adopt this rule, but none have.

The MLB should not be ground zero for pace-of-play testing. College baseball should take on that burden. Even if the pace of play remained relatively unaffected—which is unlikely—rule experimentation would at least give college baseball the distinction from the MLB that it desperately needs.

At-bat minimums for pitchers, time limits between pitches and batters, limited mound visits, and reduced time between innings would also help. There is no need to fundamentally change the game of baseball—it has a wide enough appeal and has stood the test of time—but baseball also should not remain stagnant while the rest of the world speeds up.

Baseball in general is facing a problem, and college baseball is facing an even bigger one. The NCAA should get more adventurous with rule changes and experimentation to draw larger crowds and widen appeal. College baseball, like the MLB, can move forward while still embracing tradition and should start making changes now.

Ackerly: The NCAA should make sure baseball is played in its purest form.

The argument for instituting the runner on second rule in the MLB was simple: Baseball games are too slow and too static. The assurance of action in extra innings and that the number of innings will not stretch deep into the teens will bring more fans to the ballpark and make them switch their TVs from, say, the Minnesota Timberwolves to the Minnesota Twins.

Purists be damned, the change worked as it was meant to.

Are games ending faster? Definitely. Extra innings games ended in the 10th inning 69 percent of the time in 2020, compared to just 46 percent in the three preceding years. Last season was the first in over a century in which not a single game went longer than 14 innings.

Are more people watching these games? Also a resounding yes. It will take more time to evaluate the impact on attendance as the 2020 season was played behind closed doors, but the hope of getting more eyeballs was fulfilled. MLB.TV’s viewership doubled for extra innings compared to years prior because people are actually turning the games on for extra innings rather than off.

While the change worked in accomplishing the MLB’s aims, this does not mean the NCAA should institute the rule in the college game. In baseball’s war between staying true to its traditionalists and drawing in the masses, the MLB threw history to the wind in an appeal to the bottom line.

College baseball is not in a situation where it has to make that choice. Attendance and viewership have dipped at the pro level, but interest in college ball is on the rise.

Viewership for the College World Series has steadily trended up over the past two decades, and the 2018 and 2019 finals were some of the most watched in recent history. The decisive third game of the 2019 series between Vanderbilt and Michigan was the most-watched baseball game on ESPN that year.

Attendance figures have been similarly strong. Live attendance at the championship has also been on the rise, and the overall attendance at the event has not dipped below 300,000 since it first surpassed the milestone in 2006.

Regular season attendance has also ticked up this century at a regular clip, and stadium expansions at a number of the top programs have been a boon for the increased turnouts. The leaders in attendance each season are also very consistent and not strictly tied to the performance of the program that year, proving that these fanbases are largely comprised of consistent, hardcore supporters.

Given this trend, the czars of the college baseball world have no reason to change what has become a stable, winning formula. College baseball is trending in the opposite direction of the MLB, and it relies on a constant group of fans that have shown no signs of going anywhere. Risking the frustration of these loyal supporters in the hope of attracting new demographics that do not exist is a fool’s errand.

The rule is also unpopular with the people who these games are ultimately for: the coaches and players. Although the NCAA allowed conferences the option of instituting the change this season, none have opted to do so as of yet.

Dave Van Horn, head coach of Arkansas—which is one of the top baseball programs in the nation and consistently draws large crowds—recently spoke out against the possibility of adopting the rule, saying he prefers “regular baseball” and would only make the switch if he “had to.”

While college basketball and football have become fester pits for endless commercialism and profit making, college baseball has stayed abreast of these trends. It’s a laid back affair, with a steadily growing group of loyal fans enjoying some pure baseball.

Let’s keep it that way. 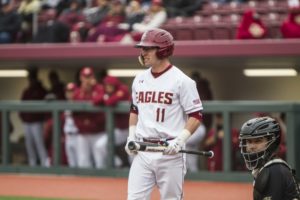