Hafley, Jurkovec, and Grosel Discuss Fan Presence and Improvements Ahead of Spring Game

With the 2021 Jay McGillis Memorial Spring Game on the horizon this Saturday, Boston College football is preparing for its first game-like scenario since the end of its 2020 season and, more importantly, its first game with in-person fans in a year and a half.

This year’s Spring Game comes almost exactly a month after the Eagles started spring practices. And with most of the starting lineup and coaching staff returning this season, the Eagles have begun their spring season with welcomed continuity.

Despite the excitement brought on by an in-person audience and the first chance to get back into a game-like situation, head coach Jeff Hafley said his main goal isn’t to create a spectacle, but instead to give his team a chance to enjoy playing football.

“Saturday is going to be about the players,” Hafley said during Thursday’s media availability. “We’re wanting to have a great time and wanting them to enjoy having their families watch them play football. … I just want them to have fun.”

Despite the fact that the Spring Game has minimal consequences, Saturday’s game is arguably the closest BC has been to a normal game since the COVID-19 pandemic derailed its offseason in March of 2020. With Hafley’s hiring, a complete revamp of the supporting coaching staff, and Phil Jurkovec’s arrival, BC football has undergone a lot of change in the past year and a half. Hafley said just getting back out in front of real fans at Alumni Stadium is all his team needs.

“Schematically, we’re not going to do too much,” Hafley said. “We’re going to be very vanilla, just let the kids line up, enjoy being in the stadium on a nice Saturday, and have a blast.”

While Hafley might not have anything grand planned in terms of scheme, that doesn’t mean the game won’t mean anything to the Eagles.

Along with the sentimental value of players’ parents seeing them play for what’s likely the first time in almost two years, the Spring Game also provides an opportunity for the Eagles to showcase their offseason improvements.

“[Jaelen Gill] is one of the guys that have really made the biggest steps so far this spring,” backup quarterback Dennis Grosel said during Thursday’s press conference. “He’s been really working hard. He’s getting comfortable with everything. That’s really what it ties in to. It’s just another year in the same system.”

Gill, a transfer from Ohio State, broke out last season with 435 yards on 29 receptions. With star receiver Kobay White’s absence due to a knee injury last season, Gill became a fundamental part of a receiving core that remains almost fully intact going into the 2021 season.

Wide receivers, however, will not be the only players catching passes on Saturday. According to Grosel, BC’s running backs have also worked on their ability to receive balls downfield.

“They’re all evolving into really good pass catchers,” Grosel said. “The run game has really evolved too. It’s something that we really wanted to work on this spring and it’s … really looking clean.”

With his second season in maroon and gold approaching quickly, Jurkovec is also progressing as he further adapts to a new scheme—as well as a heightened presence in the spotlight.

The full extent of Jurkovec’s development in the pocket might not be apparent on Saturday. As a first-year starter in 2020, Jurkovec settled down more and more in the pocket with each passing game. While the Eagles will be playing a semi-normal game, BC’s defense will not be attacking the quarterback with its normal vigor, according to Hafley.

Last season, Jurkovec threw for 2,558 yards, the 18th-most in the NCAA even after a separated shoulder kept him out of the final game of the season. With the return of all of his top receivers—minus Hunter Long and potentially White—the bar is even higher this season. 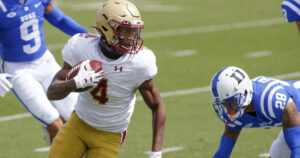