If nothing else, the 2020 Eagles could huck it deep. Phil Jurkovec and Zay Flowers connected on deep touchdown after deep touchdown for Boston College football, highlighted by Flowers’ three-touchdown, 162-yard performance against Pittsburgh. The high-octane duo was up to its old tricks in the Jay McGillis Memorial Spring Game, pairing up for two deep touchdowns as Team Boston defeated Team Eagles 20-16.

That said, the Eagles’ continuity from last season displayed both the bad and the good. Jurkovec struggled with his accuracy at times, as the porous offensive line provided little protection and opened up few holes in the run game. Here are two takeaways from the game:

The Eagles’ first-team offense, under the umbrella of Team Boston for the purposes of the Spring Game, struggled for the majority of the first half. While Dennis Grosel started a perfect 7-for-7 through the air and led the second-team offense to a 10-0 lead, Jurkovec looked inaccurate, out of sync with his receivers, and at the mercy of a struggling O-line.

When the Team Boston offense finally got clicking, however, it looked just like the high-powered passing attack the Eagles repeatedly showed off last season. Just like last year, Jurkovec took snaps from a mix of under center and in the shotgun, and he relied heavily on play action to take deep shots down the field.

With a minute to go in the first, Jurkovec faked a stretch play to Andre Hines and rolled to his weak side before tossing the ball to tight end Brendan Smith in the flat.

Smith, a redshirt junior, seldom saw the field over the last two seasons but seems to have taken Hunter Long’s spot as the Eagles’ No. 1 tight end and racked up four catches for 42 yards in the game. While Smith does not have the same proven contested-catch ability as Long, he showed off an impressive combination of in-line blocking and open-field skill.

Jurkovec’s connections with his veteran receivers also brought back good memories from last season. Team Boston scored all 14 of its first-half points in the final minute of the half, and the first scoring drive got a boost in a big way on a play-action post to Jaelen Gill, who scampered down to the 35-yard line before the play was called dead.

The two touchdowns were all too familiar for BC fans, as Jurkovec took a pair of snaps from under center and hucked it down the sideline to a streaking Flowers both times.

While the strong play from Flowers and Gill matched their dominant play last season, BC also showed off the talents of a number of more unproven pass catchers. The underclassmen trio of Taji Johnson, Lewis Bond, and Charlie Gordinier was spectacular in the second-team offense for Team Eagles, combining for 13 catches and over 150 yards.

Highlight-worthy plays abounded among the 13 catches, as Johnson showed off the strength in his 6-foot-3, 208-pound frame by sustaining a powerful hit from linebacker Jaylen Bailey and coming down with a tough catch.

Bond got in on the spectacular plays as well, laying out for a ball in the endzone and just narrowly landing out of bounds.

Questions in the Backfield

With David Bailey in the transfer portal, the Eagles have considerable uncertainty in their stable of running backs. Saturday’s scrimmage did little to provide clarity on the matter or offer much hope that BC’s rushing attack will improve from its miserable performance in 2020. Three ball carriers got reps with the first team—Travis Levy, Xavier Coleman, and Hines—and they combined to pick up just six yards on their 12 carries.

Hines redshirted his freshman season last year but got the majority of Team Boston’s carries with seven, totaling three yards. At 6-foot-2 and 215 pounds, he is a physically imposing back in the model of Bailey, but he struggled to find holes in the teeth of the first team’s defensive line. The Eagles’ offensive line success in the run game steadily improved across last season, and with the entire group back this season, the line will look to follow a similar trajectory heading into the fall.

While the backs struggled on the ground, their involvement in the passing game was much more promising. Coleman, in particular, made his presence known through the air, as he picked up a pair of catches for 12 yards and made an impressive one-handed catch on an out route out of the backfield.

Coleman also demonstrated his versatility as he was split out wide and motioned in and out of the backfield and, even though he totaled negative yards on the ground, showed off his speed to the outside.

Coleman’s solid hands and quickness give the Eagles another key piece in the passing game and, though Levy is also a proven pass catcher, offer BC a true scatback for the first time in years. 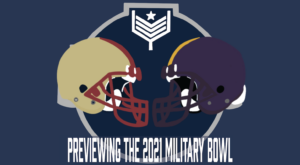 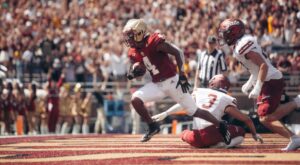