Eagles Dominate Fairfield in First Round of NCAA Tournament

For all the accolades, praise, and name recognition Charlotte North has earned in her time with Boston College lacrosse, it’s easy to forget this is just her second year in maroon and gold. She wasn’t there for BC’s three straight National Championship title game appearances—and three straight losses. In fact, before Friday, she had never played a playoff game in a BC uniform.

Her stat line in her first NCAA Tournament appearance with BC, however, could have easily been that of multiple games, rather than just one. North finished the game with a staggering seven goals—tied for the program record in a playoff game—but she wasn’t alone. Eight different Eagles found the back of the net in a 19-6 win over Fairfield (13-2) in the first round of the NCAA Tournament.

After the cancellation of last year’s postseason, three losses in the national title game in the three years before that, and an early exit from the ACC Tournament this year, the Eagles (14-3) have a lot to prove this postseason.

As a result, even with a faceguard on her practically at all times, North made sure the Stags felt her impact early on. She recorded five first-half goals, including the first two of the game. Since Louisville held her scoreless in regulation with a faceguard back in March, North has adapted to the constant man-to-man coverage, and it hasn’t held her back since.

Maybe North, named a Tewaaraton Award finalist this morning, was showing off for the Tewaaraton Award Selection Committee. Or perhaps North is just that good, and she was on the hunt to continue her pattern of dominance in clutch situations.

Remove North from the equation, however, and the Eagles would still have no trouble racking up points. Seven Eagles accounted for the other 12 of BC’s 19 points, including four from Jenn Medjid. If North hadn’t recorded a single point, BC still would have won the game by a longshot.

BC head coach Acacia Walker-Weinstein actually did take North out of the equation for a while, sitting her star player for more time than usual in the second half once BC had already run the score up out of doubt. Doing so gave both the Eagles’ starters a rest and the typical second-stringers a chance at playoff competition.

Abbey Ngai, who started during BC’s most recent NCAA Championship run in 2019, was one of the beneficiaries of the line change, as she now plays second fiddle to Rachel Hall. Hall finished the first half with a pair of saves, and Ngai came in to add a pair as well. Kait Devir then came in for the last three minutes of the game in net for the Eagles, and she made a late-game save from the top of the crease.

Andrea Reynolds, Kayla Martello, and Bridget Simmons all capitalized on the added playing time as well. The three found the back of the net in rapid succession, with Reynolds’ second goal of the year, Martello’s fourth, and senior Albany transfer Simmons’ first of the season late in the game.

After North opened the afternoon with two straight goals, Annie Walsh added a third, and Fairfield finally got on the board about 10 minutes in to cut its deficit to two, which was as small as it would get for the remainder of the afternoon. BC exploded on a 9-1 run over the next 13 minutes, essentially putting a win out of doubt for the Eagles before the first-half horn even sounded.

BC had a running clock for practically the entire last seven minutes of the first half—as well as the entirety of the second—after expanding its lead to double digits and never looking back.

Despite the obvious scoring proficiency on the Eagles’ side of the ball, what set BC apart from the Stags was its defense. Fairfield finished the day just 10-of-16 on clears and conceded 14 turnovers, many of which were forced.

With the win, BC is now one step closer to the ever-elusive national title, and the Eagles will take on the winner of UMass and Temple, who are set to square off on Friday afternoon. 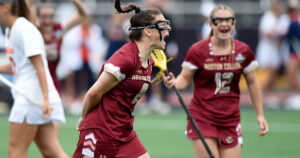 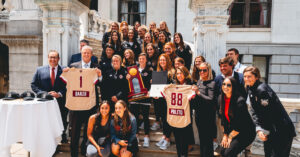