In 40 all-time meetings, Boston College and Harvard women’s soccer have practically split the results down the middle. The Crimson have the upper hand with 20 wins and five draws, but the Eagles’ 15 wins in the all-time series keep it contentious.

With that even of a rivalry, the double-overtime thriller that took place on Thursday night was far from a surprise. As rain poured in sheets down on Jordan Field in Cambridge, the Eagles (5-1-1) battled unbeaten Harvard (3-0-1) to a 3–3 draw.

After not facing many tests against Kennesaw State, BC goalkeeper Wiebke Willebrandt faced a full game’s worth of pressure out of the Crimson. Forward Murphy Agnew, Harvard’s 2019 leading goal sorcerer, came out firing with shot after shot on goal in the first half. The Crimson finished the half with a 8–2 shot advantage over the Eagles as a team.

Willebrandt, however, looked in command the entire game. She made many key diving saves for the Eagles and fended off all five of the Crimson’s corner kicks in the first half. Her performance kept the game scoreless and kept the Eagles alive in a lopsided first half.

Rain continued to pour as the second half started, and nearly straight away, the goals began to pour in too. Harvard finally got the ball past Willebrandt when midfielder Josefine Hasbo scored the first goal of the game in the 50th minute. Hasbo sped by her defender and collected a through ball from Ainsley Ahmadian to tap it past Willebrandt.

But just when it looked like Harvard was going to take control, BC freshman standout Ella Richards scored the Eagles’ first goal in the 58th minute to level the score once again. Sam Agresti got the ball to her sister Michela, who then found Richards right in front of the goal to tap it past Harvard goalkeeper Anna Karpenko.

Agnew gave the Crimson the lead again, but less than a minute later, Richards evened the score once again.

Jenna Bike pushed the ball up the right wing in the 63rd minute of the game. She fired a cross to a scrum in the middle of the box, and the ball found Richards for a tap-in goal, marking her eighth of the season and her third multi-goal game of the season.

Richards’ tally gave the Eagles’ offense the momentum it needed. The ball once again found Bike on the right wing, and she fired off a shot that deflected off the post for her second goal of the season.

As is to be expected in a rivalry, Harvard fought right back and changed the momentum to its side of the field. In the 73rd minute, the ball found the foot of defender Taylor Fasnacht on the right wing. She fired a burner just past the outstretched arm of Willebrandt to tie the game again at 3–3.

From there both goalkeepers locked it down, and neither team scored the rest of the way through two overtime periods. All together, the Crimson outshot BC 25–8, but Willebrandt held her own in the net to give the Eagles a fighting chance.

In the 94th minute, the Eagles had multiple chances to end the game. It started with forward Sam Smith, who ripped the ball at Karpenko with no luck. The ball deflected right to forward Abby Mcnamara for a header right in front of the net, but Karpenko denied her once again.

Harvard then took the ball right back and had a great chance in front of the net for prolific scorer Agnew, but Willebrandt once again made a diving save. She made another save minutes later on Fasnacht, who was looking for her second goal of the game. 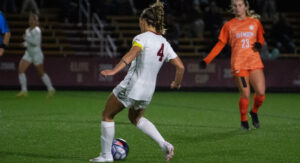