The game will air on ESPNU.

From 1991 to 2004, BC and Temple overlapped in the Big East, resulting in 15 of the teams’ 38 all-time meetings to date. BC holds a 29–7 edge in the series, which also includes two ties. BC’s last loss to the Owls came in 1999, when backup quarterback Devin Scott led the Owls on three consecutive touchdown drives, ending BC’s four-game win streak to open the season. Since then, BC has won the teams’ last six meetings, including most recently a 45–35 win in Alumni Stadium in 2018 in which the teams combined for 875 total yards of offense. Linebacker Isaiah Graham-Mobley scored a scoop-and-score touchdown for the Owls, though in this year’s meeting, he’ll don maroon and gold after transferring to BC this offseason.

What To Expect From Temple:

The Owls’ 2020 season lasted a total of just seven games and 43 days, and as a result, BC doesn’t have much film with which to prepare. All together, Temple lost 215 man games due to COVID-19 protocol, injury, opt-out, transfer rules, and suspension, which averages out to about 30 missing personnel per game.

Still, the Eagles can look at two vastly different performances from the Owls to open the season. The first, a 61–14 loss to Rutgers, saw an abysmal passing performance from D’Wan Mathis, who finished with 8-for-24 passing for 148 yards, no touchdowns, and one interception. No receiver recorded more than 50 yards, and both touchdowns came on the ground. Temple’s second game saw Justin Lynch take over as quarterback and complete 19 of 23 passes for 255 yards, two touchdowns, and no interceptions against Akron. Randle Jones caught seven passes for a staggering 170 yards and two touchdowns, and Jadan Blue added five receptions.

“We’ve got to know where those two are at all times,” head coach Jeff Hafley said when he met with the media on Wednesday.

Temple’s offense finished last in the American Athletic Conference last year in touchdowns and total points, and second to last in points per game. The Owls also tied for the most interceptions thrown despite playing at least one fewer game than every other team in the conference.

After giving up 365 yards of offense to Rutgers, a team which finished 13th in the Big Ten last year in yards per game, Temple’s defense looked lost. Of those 365 yards, 220 came on the ground. The Owls didn’t fare much better in run defense against Akron, giving up 171 rushing yards.

After the departure of Graham-Mobley and defensive tackle Khris Banks, both of whom transferred to BC in the offseason, the Owls are left with an inexperienced front seven. Altogether during or after the 2020 season, 10 defensive players transferred away from Temple. Graduate linebacker George Reid leads the Owls with 15 tackles through two games this season, and William Kwenkeu has registered two sacks.

If BC’s run game looks anything like it did against UMass last week, the Eagles are in good position against a lacking Temple run defense. BC quarterback Phil Jurkovec is out with injury, which may force Hafley and offensive coordinator Frank Cignetti to put a greater emphasis on the Eagles’ ground game. Still, Dennis Grosel has proven that he’s one of the nation’s best backups, so the Temple defense will have to prepare for every option. If the Eagles can clean up their penalty issues from last week and contain Temple’s dynamic receivers, BC can look to return to Chestnut Hill with an unblemished record. 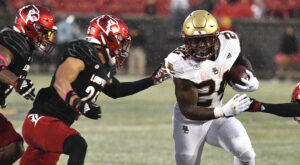 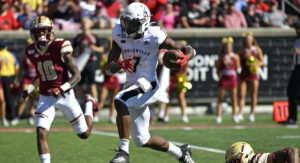