What do a Greek god fighting for climate justice and upscale housewives from New Jersey have in common? Home landscaping.

Pulitzer Prize finalist Madeleine George’s unconventional comedy, Hurricane Diane at the Huntington Theatre Company shows that suburban housewives can be just as tough as the ancient god Dionysus when it comes to the curb appeal of their houses.

In the comedy, Dionysus, shortened to “Diane” (Rami Margron), comes down to earth as a lesbian gardener to put an end to the environmental damage humans caused. As the Greek god of vegetation and fruitfulness, her ultimate goal is to reverse the damage done to the climate and planet. By establishing gardens that would allow the population to live solely off of Earth’s resources, she would help eliminate mass production of food, heat, and energy, which are harmful to the environment.

The play takes place after the devastation of Hurricane Sandy, and Diane is pressured to accomplish her goal before another storm hits New Jersey. Attempting to go garden by garden, Diane begins her mission by trying to seduce her most stubborn opponent—housewives in New Jersey.

In the setting of four suburban moms’ identical kitchens, Diane tries to convince the moms to rip out their lawns and backyards that have no environmental benefits and replace them with features that will replenish the ecosystem.

She tries to instill a holistic living-in-harmony-with-Earth approach to gardening, an aspect the housewives were not concerned with when they hired a landscaper. Diane suggests including elements that are beneficial but not as visually appealing, such as permaculture and paw-paw trees.

Beth Wann (Marianna Bassham), is the weakest out of the four housewives in standing up to Diane. She leans on the quirkier side and is the first to cave when Diane pushes her changes onto Beth’s garden. Despite working for HGTV Magazine, Renee Shapiro-Epps (Kris Sidberry), is more inclined to the environmentally friendly lifestyle that Diane wants to incorporate into their neighborhood. Another housewife, Pam Annunziata (Jennifer Bubriski), is your cheetah print–wearing soccer mom, who is quite literally prepared for anything, including a Greek god coming down to Earth. Finally, Carol Fleischer (Esme Allen) is the ringleader of the four moms. She is clean-cut, works in compliance, and is hell-bent on having her picture-perfect HGTV garden. No battle in ancient Greece could have prepared Diane for Carol’s convictions.

As hard as Diane tries she cannot convince Carol to give up her dream of a perfect, picturesque front lawn. In the end, Carol chooses the visual appeal of her home over helping the planet. Not even a Greek god could sway her into being more mindful of how she treats the environment.

In 2019, Hurricane Diane received an Obie Award for Excellence in Off-Broadway Theatre. George is also a Pulitzer Prize finalist for her other play, The (curious case of the) Watson Intelligence, published in 2014.

Jenny Koons, the director of Hurricane Diane, brought to fruition the humorous script of George. Through her direction, the actors balanced the witty lines of Hurricane Diane with the imperative matter of the physical damage to Earth and its natural resources. Overall, Hurricane Diane serves as a commentary on where the priorities of individuals lie when it comes to conserving the Earth. The play leaves the viewer questioning their own impact on the planet and will hopefully lead to a discussion about the harmful effect of human nature. 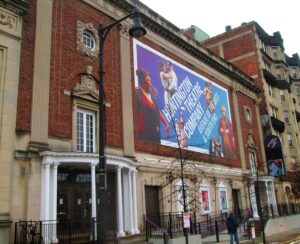 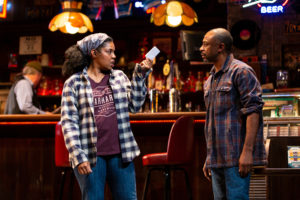