With 13 petals representing each of the 13 villages in Newton, Nancy Schön’s sculpture of a sunflower for the 30th birthday of the Newton Free Library exemplifies her fondness for her hometown and her appreciation for the place that inspired her to pursue art.

“I think somehow I’ve been sculpting all my life,” Schön said. “It’s something that I really love to do and for some reason, I did it. My hands like to work in the clay and that’s what happened.”

The donated sculpture is displayed at the front of the library building to the left of the book drop. Schön does site-specific sculptures, meaning she chooses the design for the sculpture based on where it is being placed.

The sculpture is a true representation of Newton, with each petal having the name of one of the 13 villages on it to show the interconnectedness of the town, Schön said.

Schön grew up in Newton and became interested in pursuing art at age 10 after reading a book about Michelangelo in the library. She fell in love with his artwork, and now she gets to have people fall in love with her own artwork at the same place.

“The library is a central place,” Schön said. “I’ve always loved the library. I have three sculptures at the library … Winnie the Pooh and Piglet and Eeyore, at the Newton Library in the Children’s patio.”

Many of Schön’s sculptures are based on children’s literature. “The Owl and the Pussy-Cat,” which was recently installed in Dorchester, according to Schön, is based on the poem with the same name. Her famous “Make Way for Ducklings” statue in the Boston Public Garden is also based on a children’s book of the same title.

The “Make Way for Ducklings” statue is about “promises kept and family values,” according to Schön’s website.

In addition to her 10 sculptures in the Boston area, Schön also has sculptures all over the world, from Oklahoma and Tennessee to Russia and Israel.

Schön started her career showcasing her artwork in galleries but changed to public art when she realized her works could make an impact in other’s lives, according to her website. She also wanted her work to be physically touched, not just touch the hearts of those who see it.

“[My sculptures are] available to anybody, anytime,” Schön said. “It doesn’t make any difference who you are, it’s always there for us to be part of. And so that’s really nice because it’s always there for everybody. It’s free to the public, and you can look at 10 o’clock at night or you can look at 10 o’clock in the morning, or whatever. So it’s a very special sort of thing, to have something out for people to see all the time.” 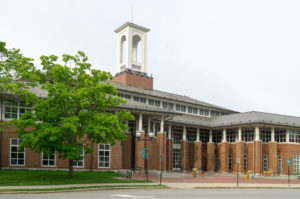