Home » Annual Pops on the Heights Returns With A Sold Out Gala
Arts, On Campus

Annual Pops on the Heights Returns With A Sold Out Gala

Beneath strands of red and blue lights suspended from the ceiling of Conte Forum, the rock band Train performed for a sold-out crowd of Boston College parents, alumni, and students at the 29th Annual Pops on the Heights on Friday.

The gala returned as an in-person event on Sept. 24 after shifting to a virtual format last year due to the COVID-19 pandemic, where Grammy-nominated singer Josh Groban and the Boston Pops Orchestra, led by conductor Keith Lockhart, performed online.

This year, the Boston Pops returned to Conte Forum, with Lockhart announcing after their opening song that they were glad to be back. The hockey and basketball arena was transformed into the gala, with a red carpet laid on the court, and tables and wait staff lining the floor while families were served dinner.

Over the last 28 years, the event, also known as the Barbara and Jim Cleary Scholarship Gala, has raised over $100 million and funded 3,500 scholarships. This year, the event raised a record-breaking $14.5 million to fund scholarships for BC students.

In a video message to the crowd, co-chairs for Pops on the Heights Patricia Kraft and Jonathan Kraft expressed their excitement to return to an in-person event this year.

“For many, this evening marks a return to Boston College after some time away,” Patricia Kraft said.

The Pops then shifted to some recognizable songs, including “Adventures of Han” composed by John Williams from Solo: A Star Wars Story, U2’s “I Still Haven’t Found What I’m Looking For,” and Abba’s “Mamma Mia.”

Shifting to a jazzier genre, student performer, Grace Collins, MCAS ’22, joined the Pops to sing Judy Garland’s “The Man That Got Away.” Aided by brassy trumpets and bright drum beats, Collins, dressed in a red dress, channeled old Hollywood through her performance, her voice resembling Garland’s rich and vibrant vibrato.

Train, led by lead singer Pat Monahan, took to the stage, playing several of the band’s hits, including “Drive By,” “Play That Song,” and “Hey Soul Sister”—which had the crowd dancing on its feet, with even Lockhart singing along to the lyrics.

Holding up a BC jersey with the red bandana design on it and “For Welles” inscribed on the back, Monahan dedicated his song “When the Fog Rolls In” to the BC alum Welles Crowther, who died rescuing people from the twin towers on Sept. 11, before tossing the jersey into the crowd.

Before singing his song, “Don’t Grow Up So Fast,” Monahan reflected on being a parent and taking time to cherish his children—a message that resonated with many of the families in attendance with their kids for BC’s Family Weekend.

Train ended the evening with its two-time Grammy-winning single “Drops of Jupiter,” featured on its second album Drops of Jupiter. While he performed, a crowd gathered at the front of the stage, and red and white roses were collected by the singer from fans. In the stands, families swayed to the beat of the music and waved neon glow sticks while echoing the lyrics. 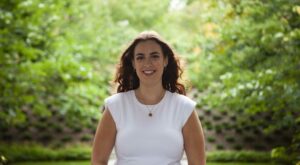