Adam Wilson, an author from Newton, recently released his third book, Sensation Machines. Finished prior to the pandemic and originally released in hardcover in July of 2020, the paperback edition was released on Sept. 7.

Sensation Machines follows the failing marriage of Brooklyn couple Michael and Wendy Mixer. After an economic crash, Michael lost the couple’s life savings, which he has not told his wife about yet. When Michael’s best friend is murdered, the suspect is traced back to one of Wendy’s clients. The subsequent events have a drastic effect for both the couple and the country.

The novel covers many different topics and themes, spanning multiple genres and is set in a futuristic version of New York City, Wilson said in an interview with The Heights.

“It’s a sort of hybrid genre novel that is part political thriller, part murder mystery, part satire of tech and Wall Street, but really at its heart it’s a kind of intimate story of the end of a marriage,” Wilson said.

The novel explores how major historical events affect individual lives through the economic crash and its effect on the couple’s marriage. The novel asks questions about what responsibilities and what kind of compliticies individuals have in the wake of these kinds of events, Wilson said.

“It sort of ties back to this question about the role of individuals and world historical events and how these things that are beyond our control shape our lives, but also how individual people sort of shape these big events with the small individual choices that they make,” Wilson said.

When first writing the novel in 2011, Wilson set it during the 2008 market crash. He said he later decided not to base his novel off actual historical events, being a novelist with limited knowledge of Wall Street. Set in an “alternative counter-present” New York, though at points different from our reality, Wilson said the novel has many similarities to our world.

With New York being the central location of the book, Sept. 11 influences the story and the lives of the characters.

“The event in some sort of profound ways really changes the trajectory of their lives—the main way being that they probably wouldn’t have ended up together if it hadn’t happened,” Wilson said.

Set in the future, the novel reflects how the city is always changing and allows Wilson to imagine how the city will continue to change. Although New York is the main setting of the novel, a long section of the novel is set in Western Massachusetts in the Berkshires.

“I still consider myself very much a Massachusetts writer with a lot of ties to the area,” Wilson said.

Wilson has strong ties to Newton, as a graduate of Newton South High School and Tufts University. Although he has lived in Brooklyn for the past 15 years, his connections to the city remain strong. His parents still live in Newton and he read his work at Newtonville Books, Wilson said. Reflecting his ties to the Boston area, Wilson said his past three books have incorporated Massachusetts in some way.

Wilson said the 2008 market crash and the Occupy Wall Street protests in 2011 influenced his writing. He said he was inspired by the protesters’ anger toward the bankers, as well as the lack of humanity the bankers showed. In his novel, Wilson explores the bankers’ humanity.

“I kept returning to this idea of them being human beings and people and thought it would be a really interesting challenge to try to humanize this person who … would become a sort of avatar for all that was horrible and wrong with the world, and thinking about how these larger systems sort of encourage certain behaviors and encourage a kind of greed …  towards work and towards money, that can be really destructive,” Wilson said.

Wilson said he feels as if the novel could have different meanings for anybody of any age or background who reads it.

“I would encourage anyone to read it who has any sort of concerns about the future, but I think it’s ultimately a comic novel,” Wilson said. “Even if it explores some big ideas and has some quite sad parts, my hope is that it’s also fun and entertaining and all that.” 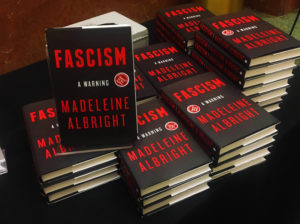