Prior to a weekend trip to Pegula Ice Arena in Happy Valley, Boston College women’s hockey had never taken on Penn State. The Nittany Lions only joined the NCAA from the ACHA in 2012, struggling to earn one win in each of its first two seasons in the NCAA. After finishing last season 16–3–2 and falling from the College Hockey America Tournament semifinals, Penn State has put itself on the map, earning votes in the 2021-22 USA Hockey preseason poll.

Even against an unfamiliar opponent, however, the No. 8 Eagles (2–0) proved why they earned a top-10 spot in the nation, sweeping the weekend in State College with a 2–1 win over the Nittany Lions (0–3–1) on Friday.

After a 2–1 overtime win for BC on Thursday, Penn State was out for revenge one day later, and less than five minutes into the contest, Natalie Heising netted a one-timer from Kiara Zanon to take an early lead.

With its breadth of goal scorers, however, BC was down but not out, and Caroline Goffredo tied the game up just four minutes later with her first career goal. Willow Corson forced a turnover at the blue line and sent the puck to Hannah Bilka—tied for second-most points on the team last season—who slotted it to Goffredo for the finish.

Goffredo saw minimal playing time as a freshman during the 2020–21 season, appearing in 14 games and registering three points, all on assists, but just four minutes into her sophomore campaign, the Mount Laurel, N.J. resident had tied up the game.

A scoreless rest of the first period passed, and BC came out hot in the second. Seven of BC’s 17 total shots came in the middle frame as the Eagles searched for the go-ahead goal. And just eight minutes in, they found it.

Bilka got the puck in the neutral zone and carried it all the way to the left circle, firing a cross-ice shot that found its way inside the right post for her first goal of the season. The tally also marked Bilka’s fifth game-winning goal of her career.

BC had three power-play opportunities but registered no shots while a man up. Penn State, on the other hand, fired off four shots in just over six minutes of man advantage. Freshman Keri Clougherty added her first career point with an assist on Bilka’s goal. The Lynn, Mass. product also blocked three shots en route to the win.

Bilka and Goffredo’s goals were two of just 17 shots the Eagles took all night. Penn State, meanwhile, peppered BC goaltender Abigail Levy with 34 shots, all but one of which she got in front of. For the second night in a row, the Minnesota State transfer kept the Eagles competitive under Penn State’s high-powered offense.

Fifteen of her 33 saves came in crunch time, with BC leading by just one goal in the third period. The Nittany Lions spent the majority of the frame in BC’s zone, but Levy stood tall, sending the Eagles home from their road trip with two wins and no blemishes on their record. 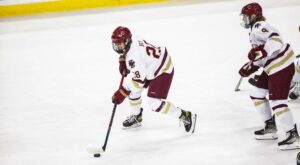 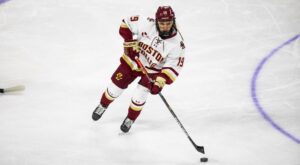