’Tis the eve before cuffing season and Lil Nas X has got all the boo’d up hopefuls and boo-less listeners covered with every emotion on his latest album, Montero, released on Sept. 17. Montero Lamar Hill (aka Lil Nas X) serves up a fresh mix of rap and rock on this heartfelt, youthful, and strikingly resonant work of art.

Playing right into the hands of the industry, Lil Nas X has mastered the art of making less than three-minute long TikTok-worthy, chart-topping, platinum-selling songs. The album, with 16 songs, barely squeaks by the 41-minute mark. Montero also features some of the pop industry’s best: Jack Harlow, Doja Cat, Elton John, Megan Thee Stallion, and Miley Cyrus. But it was Nas’ solo act that stole the show this time around.

At 22, Nas has more to say about love and heartbreak than most young adults. His take is raw and heavy-hitting, which makes his album a joy to listen to. While his rap songs create little to no effect, the soft rock and pop songs are playful and head-bop worthy.

The more upbeat song that almost crossed the line into whining is “THATS WHAT I WANT,” but it strikes a chord when he explains, “Look, you know it’s harder to find in these times / But I got nothin’ but love on my mind.” Nas could be alluding to COVID-19 restrictions making it even harder to find that special someone, but he could also be alluding to the difficulty of being queer and finding real romance in a world where it’s easier to stay quiet about one’s sexuality than to be open about it and face verbal, emotional, and psychological abuse.

“LOST IN THE CITADEL,” another soft rock piece, is relatable to all, as it details his self-deprecating thoughts over how he keeps going back to his one-night lover for quick satisfaction with someone he thinks is emotionally closed off. Singing “I need time to realize that I can’t be yours” creates an inescapable chill effect.

One of the best songs on the album, “VOID,” although much slower than the rest, is an upbeat ballad sung for “Blue” (Nas’ love interest). The song crescendos into the perfect nighttime, windows-down drive along a winding road to end a less than perfect summer season in the hopes of a more promising fall. 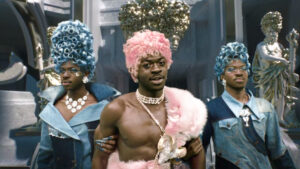