The Netflix film The Starling, released on Sept. 17, attempts to combine humor and sorrow to analyze a couple’s grief following the loss of an infant daughter. While keeping a light, heartfelt tone, the emotional speedbumps that attempt to draw audiences in instead feel downright cringey. The Starling is a face palm of a watch, threatening to test audience members’ patience with the presentation of an emotionally stuffed story that after further glance is as hollow as it is tedious.

The usually wonderful Melissa McCarthy stars as Lily, who is left grieving from the recent death of her infant daughter. Buckling under the loss, Lily’s husband Jack, played by Chris O’Dowd, checks himself into a mental facility, immediately presenting the audience with the seriousness the director attempts to place on this story. All of that seriousness disappears once Lily begins being berated by a bird throughout the movie. The movie proceeds with scenes where McCarthy physically talks to the bird, like a patient to a therapist, about how she feels about her daughter’s death.

After being directed to a doctor, Lily visits him without the knowledge that he has now become a veterinarian. Dr Larry Fine, played by Kevin Kline, ends up developing a friendship with Lily. As the bird, which Dr. Fine identifies as a starling, continues to visit Lily, she also begins to develop a connection with the bird, at first hoping to kill it until she begins feeding it.

The obvious metaphor of the starling being representative of the couple’s daughter fails to come across as meaningful, and instead is a groaning example of a writer trying too hard to get an audience teary-eyed. While the premise of the film itself is already hard to get behind, the real struggle behind watching the film is the dialogue between characters. Packed with corny jokes, odd answers to seemingly normal questions, and too many phony-feeling monologues between Lily and Jack, it’s difficult to emotionally invest oneself in the film when everything the audience is supposed to feel is forced.

Even more forced is the music choice for almost all of the heartfelt moments. Banking on solemn indie rock to get audiences in their feels, the music choice simply ends up being more cringey than beneficial.

While The Starling is supported with some strong cinematography, such as shadows over depressed characters and high angles to make characters feel small in a world they cannot control, the film is a difficult watch. Audience members are much better off watching McCarthy in Bridesmaids or Can You Ever Forgive Me?, where she is supported with a stronger script and a clearer premise audiences can actually enjoy. 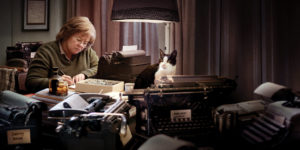