The line trailing from the doors of Boston University’s Agganis Arena on Wednesday night wasn’t for a hockey game this time. Hours before their first song at 9 p.m., fans of Twenty One Pilots began lining up to get the best spot for the band’s Takeover Tour.

Singer Tyler Joseph and drummer Josh Dun walked onto the stage in complete darkness, wearing ski masks that covered their entire faces except for their mouths. Glasses were attached to the ski masks, adding to their odd appearance. They started the concert off with “Good Day,” from the band’s newest album Scaled and Icy, accompanied by bright lights and graphics on the screen behind them. To finish off the song, Joseph tore off his mask and leaped off the stage, only to return minutes later.

The band next launched into “Stressed Out,” one of its most well-known songs from 2015. Both Joseph and Dun brought lots of energy to their performances—Joseph climbed onto elevated surfaces and jumped off them multiple times during the show, prompting hordes of fans on the floor and in the seats to sing along to every single lyric. To end “Stressed Out,” jets of smoke poured out from the front of the stage.

Joseph and Dun continued  the intense passion demonstrated by the first two songs, and the crowd responded to and played up everything that the duo did on stage. During Twenty One Pilots’ 2016 single “Heathens,” bright flashing lights bathed the arena, and as the two performed, the screens behind Joseph and Dun pixelated their appearances into comic book–style graphics. Joseph yelled to audience members to put their hands up, and the fans responded immediately—everyone’s hands went up in the air and swayed in perfect time to the music. There was a synchronized sea of hands bouncing in time with the music, adding to the high-energy atmosphere of the concert.

That same spirit dominated “Message Man,” which began with lower lighting and Joseph carrying out an altar that he placed at the front of the stage. While images of figures in black cloaks played on the screen, Joseph dipped his hands into the altar and they came out covered in some black substance. That ritual atmosphere carried into “Lane Boy,” where two people in full hazmat suits and gas masks sprayed the audience with smoke, accompanied by lasers that went from the front of the stage to the back of the arena.

This intense energy was broken up with two instrumental performances. Toward the beginning of the concert, an instrumental jam session featured a guitarist, a keyboardist, a bassist, and a trumpet player. The impressive lighting that was a trademark of the concert was showcased here, as a spotlight shone on each member of this ensemble. Additionally, after a cover of “Bennie And The Jets” by Elton John, the band gathered at the front of the stage and covered a few other songs, including “I Can See Clearly Now” by Johnny Nash and “My Girl” by The Temptations.

The entire concert created a community spirit, as it really felt that everyone there was sharing in the performance. The impressive lighting, pyrotechnics, and acrobatic displays from Joseph all furthered the concert experience for the audience, and the excitement and passion displayed by the band was matched fully by its fans. 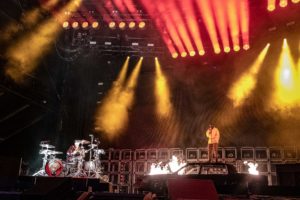 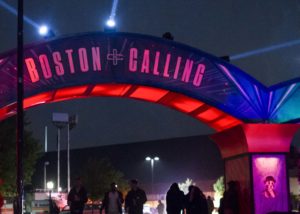 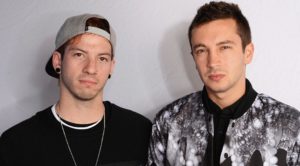