An impressive four goals in the first period for Boston College women’s hockey was nearly all that it needed to secure a 5–2 win against Maine (2–7–0, 0–4–0) on Saturday afternoon. The No. 4 Eagles remain undefeated through their first six games this season for the third time in program history.

Junior Hannah Bilka and freshman Abby Newhook, two leading point scorers for the Eagles (6–0–0, 4–0–0 Hockey East), swiftly broke through the Black Bears’ defense in the fifth minute to kick off the four-goal opening period. Bilka skillfully split the defense on a toe drag, allowing Newhook to score her fourth goal of the season to build an early lead.

Assisted by Newhook and Willow Corson, Bilka followed up her assist with a goal of her own as her breakaway shot from the circle deflected in just three minutes later. The Eagles continued their offensive attack and in the 15th minute of the matchup, as sophomore Gaby Roy scored a backhand off a clearance pass from Jillian Fey for a short-handed goal. Two minutes later, Caroline Goffredo scored when her wrist shot trickled past the goal line after a save by goaltender Jorden Mattison, bringing the Eagles to an assertive 4–0 lead.

The Black Bears came out stronger in the second period, putting more shots on net and generating scoring opportunities. After pulling their netminder Mattison, who stopped nine of 13 shots faced for a 0.692 save percentage, the Eagles failed to score against replacement goaltender Loryn Porter on any of their eight shots against her.

A little over halfway through the second period, Maine’s Morgan Trimper scored after the puck landed in front of her after a poke check by goaltender Abigail Levy.

In the early minutes of the third period, Ally Johnson tipped in a rebound on a power play for her fourth goal of the season to bring the Black Bears within two.

Despite their efforts, the two goals were not enough to overcome the deficit and Levy’s impenetrable wall. Levy recorded a 0.946 save percentage, stopping 35 shots in total. She continued to prove why she ranks first in the nation among goaltenders, especially when she kicked out her left pad while sprawled out on the ice to prevent a goal in the first period.

The Eagles regained the momentum following Maine’s power-play goal in the ninth minute of the third period, when Bilka scored her second goal of the game on a breakaway after intercepting a pass.

Although the Eagles proved their dominance on the ice with 30 faceoff wins and 14 blocked shots, their aggression also translated to penalties. Three tripping calls and one cross-checking call led to four power plays for the Black Bears, while the Eagles did not gain any power-play opportunities. Despite this disadvantage, and Maine outshooting BC 59–53, nine Eagles, including Levy, recorded a point and the Eagles emerged victorious for the sixth time this season. 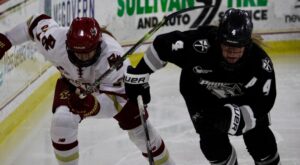 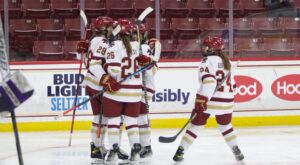 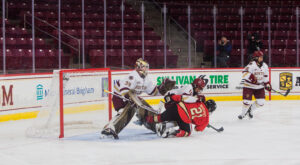