“These are just kind of fun flavors that we came up with as we were thinking about the influx of college students and everybody getting back to school and hopefully getting back to … what used to be regular life … being able to go out with friends and that sort of thing,” J.P. Licks Production Manager Beth Otis said.

“So what we did was take the Red Bull, and we just enhanced the flavor a little bit more with some pureed strawberries and some lime,” Otis said. “We used a little bit of lime juice so it has that kind of zing and a little bit of tartness to it, which makes it really good.” 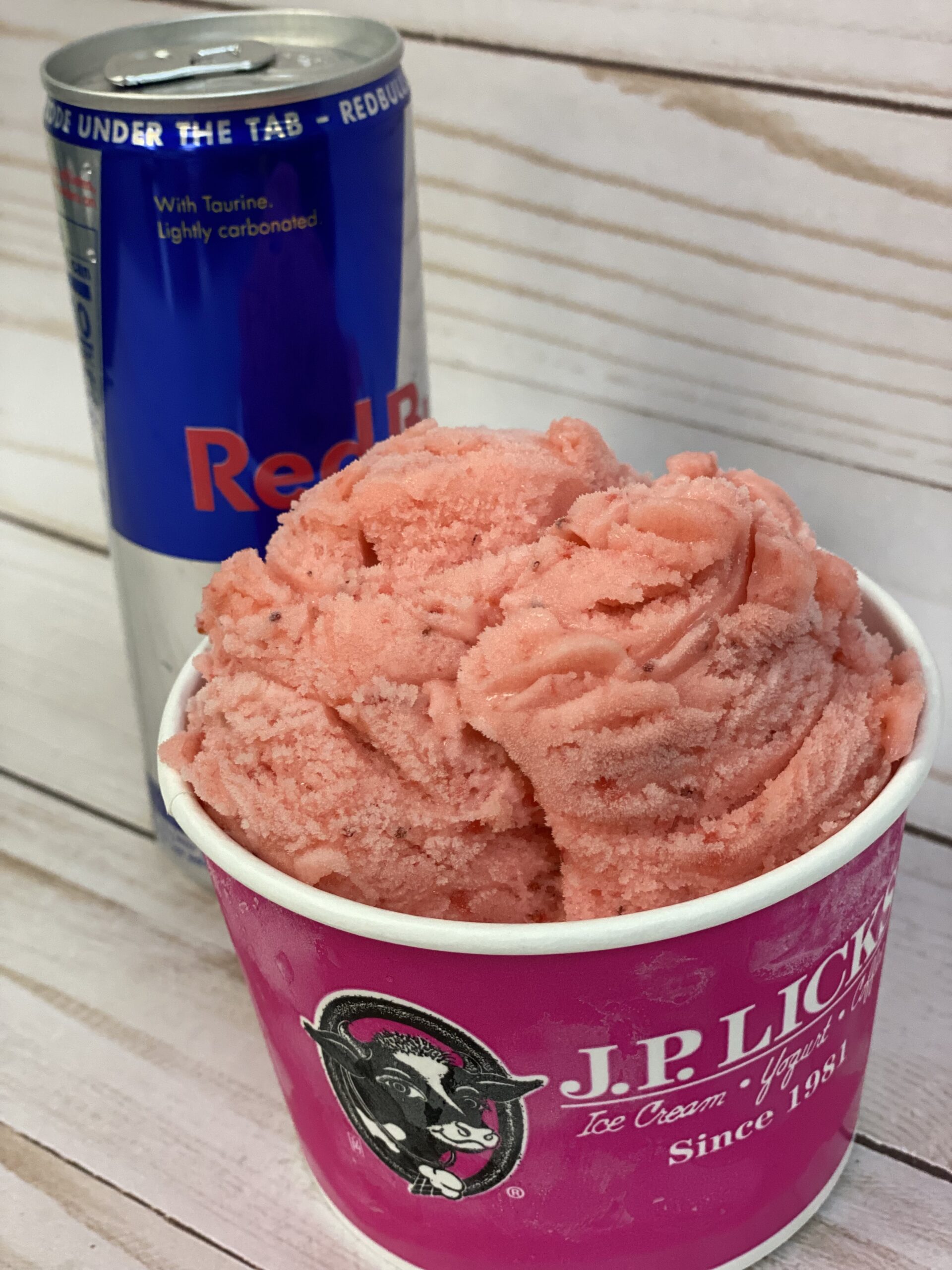 Midnight Munchies, lies outside the realm of what would typically be found in ice cream. The name is fitting, as the ice cream incorporates different snack and food items that typically satisfy “midnight cravings.”

“Midnight Munchies is a combination of what everybody munches on late at night,” Otis said. “So, it is [made with a] peanut butter and ranch dressing base and then it has potato chips and chocolate covered pretzels in there.”

What makes Midnight Munchies so unique is that the late night snacks that everyone loves are wrapped all into one ice cream flavor, Otis said.

Peanut butter is the most prevalent flavor and overpowers most of the aftertaste, with the ranch flavor sidelined. The potato chips and pretzels add a salty crunch, complementing the peanut butter and providing a blend of many different flavors that go surprisingly well together.

“I would say the Midnight Munchies is the closest to what I would call a real food ice cream, meaning it has real food in it like the potato chips and the pretzels, compared to everything else that is just typically an ice cream flavor like chocolate chip that are all sweet,” Otis said. 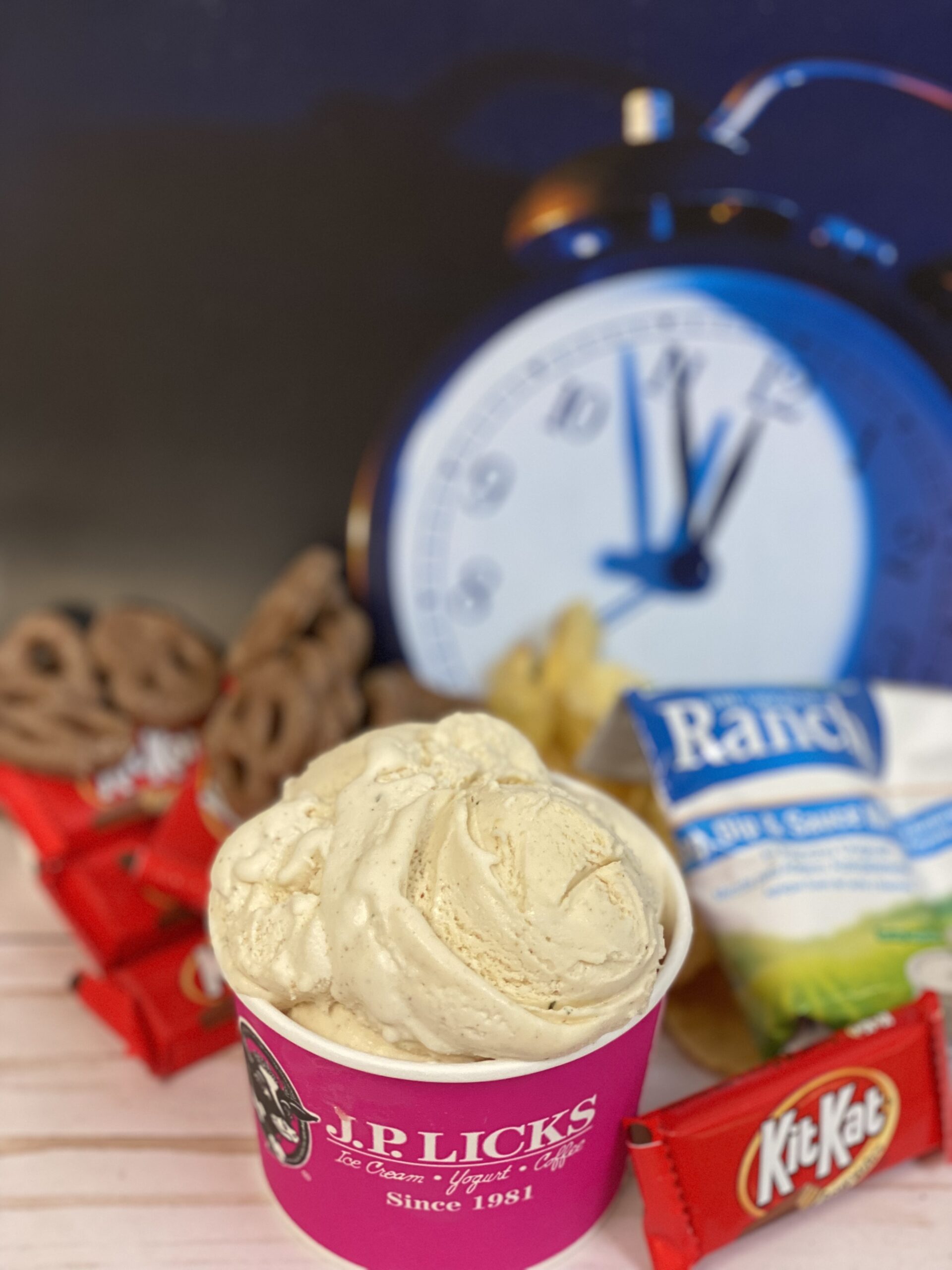 The two flavors have generally both been received very well by the community, according to Otis. Out of the two, the Red Bull flavor has been slightly more popular than Midnight Munchies, Otis said.

“I think Red Bull has a little bit more of a typical flavor, whereas the Midnight Munchies is definitely more of an exotic flavor,” Otis said. “So right now the Red Bull is definitely kind of we’ll say a bigger hit, but they both are going quite well.”

These flavors are expected to last until about the end of October, though they could always potentially return to the J.P. Licks flavor cycle depending on how well they are received in the coming weeks, Otis said.

“We like to come up with groupings [of flavors] … and that’s why these two really kind of stood out together just as being fun flavors,” Otis said. “And they actually pair really well together too because it’s got the peanut butter and the ranch and the really intense flavors that are smoothed out by the strawberry lime of the Red Bull, so they actually are really nice together.”

Unveiling unique flavors, like the two anniversary flavors, is not something new for J.P. Licks. The chain has several seasonal flavors, as well as other special edition flavors that it has introduced throughout the years, Otis said.

Some past flavors include “El Diablo,” a Tabasco-flavored ice cream, as well as a Pad Thai–flavored ice cream. New flavors have been a priority for the 40th anniversary cycle, and Otis said it is possible that some old flavors might also make a comeback later this year. 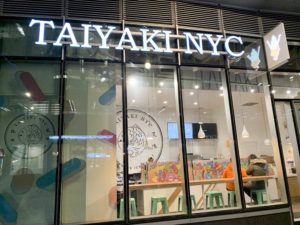