Lana Del Rey Fails to Challenge Herself on Latest Album

While March’s Chemtrails over the Country Club brought a new folksy sound to Lana Del Rey’s music, on Blue Banisters her music appears to be a return to reflective alternative pop, for better or worse.

Del Rey’s lyrics on Blue Banisters dash between heartbreaking power and tone-deaf missed opportunities. At times she creates powerful impacts through her lyrics, which subtly weave together many of her songs on this album. Del Rey, who abandons the blue flowers on “Violets for Roses”—a metaphor for changing oneself in a relationship—hurts all the more knowing that this change was for nothing, as her plans to paint her banisters blue on Blue Banisters disappear once the relationship has ended. The songs are woven together through color, telling a larger story of sadness overshadowing these relationships. Connections like this make the album a really engaging listen. The line “Comfortably numb, but with lithium came poetry” on “Wildflower Wildfire” is a powerful reference to her inspirations and how she channels her pain into art.

Del Rey’s voice is as beautiful as ever for the most part. Her soft voice really fits her muted music style. In the past, Del Rey has had moments where her vocal delivery is muddled and difficult to understand, like during parts of “Venice Bitch” on her 2019 album Norman F—king Rockwell!, but her vocals shine through with clarity and vocal precision throughout Blue Banisters. Notably, “Dealer” has a moment where Del Rey forgoes her soft falsetto and instead devolves into a scream—but just for a moment. Although screaming vocals don’t really fit within Del Rey’s signature style, she dips into this section and it disappears just as fast as it shows up.

The one aspect lagging behind is Del Rey’s instrumentation. Throughout the album, she recedes into her comfort zone with quiet piano tracks littering the album which, unfortunately, trap her rather than challenge her already established style.

Everytime Del Rey hints at wanting to go in a new direction, she does it after the main song has already neared its end. For instance, “Living Legend” features Del Rey belting a wailing outro that sounds so radically different from everything else. This section has so much potential to be the backbone for a radically different song for her, but it’s tucked away at the end of a track instead.

There’s also the one-minute “Interlude – The Trio,” which implements a completely out of place trap beat and no vocals. It’s as if Del Rey thinks her voice won’t work with the more untraditionally “Lana” aspects of the album. Instead, including these hints at breaking away from her established sound just feels like she’s wasting time.

Blue Banisters is an album caught between missed opportunities and some truly incredible songwriting. Del Rey is too scared to devote her time to experimentation, only offering hints of what could have been—trap beats, powerhouse vocals, new instrumentation, and a new sound for her. 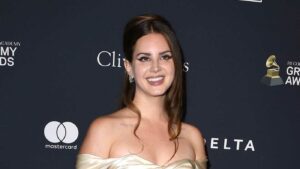