Music in the In-Betweens

The concept of being “in between” has always fascinated me.

One of my long-time favorite music albums is called Somewhere at the Bottom of the River Between Vega and Altair by La Dispute, drawing on the Chinese folktale “The Cowherd and the Weaver Girl.” Despite the original story being written in Chinese, the language of the story as told in the album is something completely understandable to anyone, as music is a universal language. Essentially, the story is about finding comfort in the gray area—the two lovers, Vega and Altair, cannot meet except for once a year, crossing a bridge over the Milky Way to meet in between heaven and Earth.

My version of the bridge is a manifestation of the unique position of many children of immigrants, caught in between two cultures. I am the “lucky” one among my group of Romanian friends to have been born in the country but not have visited enough to retain the language as well as I would hope—I call my fragmented grammatical errors “Romanglish.”

It was clear from the beginning that in order to be able to cross my own bridges between American culture and Romanian culture, I would have to change the language I used. Often, the ever-changing jargon of American teens resulted in hours upon hours of investigating the internet for new word-style combinations. I had to be intentional, meticulous, and nearly scientific in my approach to understanding other Americans. But the music stayed the same.

The issue was that I was placing distance between myself and those around me by “studying” them. I tended to self-impose my own restrictions to retain the rapidly deteriorating sense of culture as I grew up with people whose families were completely different from mine. I felt like I needed to either be on one side or the other. I wondered why people were the way they were, and why they acted the way they acted. I said things with the intention to monitor how they would react, as if I were carrying out the longest psychological study of all time. This did nothing to genuinely help me communicate with those around me on either side of my metaphorical bridge. Although my findings were interesting, they were fruitless.

I instead transferred my meticulousness from trying to understand others to trying to understand myself, using music to slowly uncover the exactness of my “in between-ness.” I remember hearing “Thrift Shop” by Macklemore, a cold, hard classic of the early 2010s, and being mesmerized by the funkiness of the instrumental contrasted with the hilarity of the lyrics. Romanian language delves heavily into irony to find humor, often getting mistranslated when I try to replicate it in English. The divinity of “Thrift Shop,” however, is the irony, subverting a listener’s expectations for the type of rap that was typical for the time, and completely turning it on its head to rap about “your granddad’s clothes.”

Being able to understand the composition and the lyrics of such a silly song forced me to take a step back from my need to study, and take myself less seriously. There was no attempt to convince myself to cross a bridge and feel uncomfortable. I was comfortable where I was, how I was, listening to a goofy song and dancing around.

Much of the music popular in America—from Billy Joel to Queen—gained a lot of traction with Romanians who did not necessarily know the lyrics or the meanings of the songs. But no other word can describe how my parents could identify with foreign music other than they understood the vibe.

The illustrious band ABBA made its way into my life because of listening to the radio in the car, usually driving with my mom. Now I can say with absolute certainty that nothing is more thrilling than singing “Dancing Queen” with your mom at 6 a.m. on your way to school, days before turning 17. Mom could not tell me the specific names of the music she would listen to growing up, but as soon as she recognized “Dancing Queen,” her face would light up the kind of way only you know your mom could. She did not need to use words to tell me how she felt. I did not need words to tell her how much I loved her. In those moments between home and school, she joined me without saying a word. She joined me on that bridge and did not ask me to move, and that was the moment I knew peace. 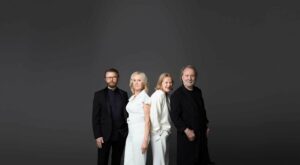