BC Men’s Basketball 2021-22: Heights Editors Give Their Predictions

With the highly anticipated Boston College men’s basketball season tipping off on Tuesday, sports editors Emma Healy, Asa Ackerly, and Ethan Ott give their predictions for the long winter ahead.

How much of a change can Earl Grant make this season?

Ethan: In six and a half seasons as BC’s head coach, Jim Christian posted an abysmal ACC record of 26–94. It will be difficult for first-year head coach Earl Grant to do worse. Grant’s job is not an easy one, but there is still hope for BC. Prior to his hiring, Grant was heralded as a talented recruiter. This fact is already evident, as he has drawn in a talented freshman class and several transfers. While it might take a few years for Grant to develop his players and grow the BC program, he’ll jump right in to try to turn around a struggling program. Fast turnarounds are possible, as two of 2021’s Final Four teams missed the tournament as recently as 2018, but even a crooked number of ACC wins would be an accomplishment for Grant.

Asa: Regardless of Grant’s promise for the future, I’m not confident he will be able to create much improvement on the Eagles’ on-court results this year. The team is just too new and too inexperienced to be able to do much, no matter who’s on the sideline. Off the court, however, Grant could make big strides. DeMarr Langford Jr. mentioned on Media Day that he feels Grant is better at connecting with the players as people than Christian was. If Grant can create a cohesive team off the court, that will be a huge success no matter the Eagles’ record.

Emma: Teams in the first year of a new head coach have been historically unsuccessful. Through December of 2020, teams under first-year head coaches did an average of 3.6 points worse offensively per 100 possessions than they had the year prior. Teams with first-year coaches who had previously been Division I head coaches fared even worse in comparison to the head coach’s previous school, underperforming on offense by an average of 7.5 points per 100 possessions. It’s hard to imagine that Grant would be one to buck the trend given the fact that nearly his entire personnel group is new to the program.

Who is BC’s most important player?

Ethan: One standout from the 2020–21 season whose name is still listed on the roster is Makai Ashton-Langford. The graduate student guard broke out last year, averaging 26.5 points per game and shooting .418 from the field. Most importantly, however, he played 397 minutes last season, the second-most of any returning player. His leadership and experience will be vital for the success of younger players and transfers, and he possesses the on-court skills to lead the Eagles to success on paper. If Ashton-Langford can step up and fill the abyss left by Jay Heath’s departure, BC could find itself with a competent front court.

Asa: Brevin Galloway. BC desperately needs a scorer, and Galloway is the Eagles’ best bet of filling that role. He averaged 15 points per game before he got hurt last season and will have to average that and then some if the Eagles have any hope of staying competitive on offense. His ability to be a threat from the outside is critical for opening up lanes for the Langford duo—Ashton-Langford and younger half brother DeMarr Langford Jr.—as well as room in the post for BC’s bigs.

Emma: BC will be desperately trying to replace defensive Swiss army knife Steffon Mitchell, who led the team with 116 total rebounds last year. James Karnik and DeMarr Langford Jr. each recorded 76 rebounds last year, which is the highest total of any player returning to this year’s roster. As a freshman last season, DeMarr Langford Jr. showed plenty of promise, and if he can keep an upward trajectory, he could become BC’s most important factor.

What is the best-case scenario for the Eagles?

Ethan: Despite an easy out-of-conference schedule, an even season seems just out of reach for the Eagles. Matchups against Dartmouth, Columbia, and Fairfield early on in the season should start BC out on the right foot, but its real difficulties will arise with its 20 ACC matchups. BC was a nearly unanimous last-place selection in preseason ACC power rankings, so it is not a stretch to say that every ACC matchup will be a challenge for the Eagles. Five conference wins feels like the ceiling for BC. The Eagles should win most of their 10 non-conference games, but some growing pains are unavoidable. If everything goes right for the Eagles, 13–17 seems realistic.

Asa: If Galloway can be a bonafide 20-points-per-game threat, the Langford duo continues to improve, and Mississippi State transfer Quinten Post surprises in the post, BC could have a halfway decent starting five. The less said about the bench the better, but that starting lineup has the potential for BC to win a handful of games in the ACC. Combined with a weak non-conference schedule largely made up of Northeast opponents, BC could win six or seven conference games and finish close to .500.

Emma: With four ACC schools ranked in the AP Preseason Top 25, there’s not much room for movement in conference play, especially considering that the Eagles begin the season ranked in the ACC’s basement. Facing non-conference opponents such as Dartmouth, Columbia, and Albany, among others, the Eagles could win a handful before jumping into ACC play. I think that 10–20 is on the table, but those 10 wins will be a grind.

What is the worst-case scenario for the Eagles?

Asa: The worst possible case is a historically bad season, which isn’t out of the realm of possibility. The Eagles could go winless in conference play, get gifted a couple of early season wins by lowly out-of-conference competition, and win five games. That would be the worst BC season since 1945–46, when the Eagles went 3–11.

Emma: Despite a low-tier non-conference schedule, this team is entirely untested, and only two members of the starting lineup have ever shared the court. It’s hard to have much faith. In the worst-case scenario for the Eagles, I imagine BC will win one conference game that it has no business winning, but not much else, making 5–25 is certainly a possibility.

How do you see the season ending?

Ethan: Although expectations are low, BC could surprise some people this season. The roster is not talentless, and if its new faces can step up and play to their potential under Grant’s leadership, the Eagles could find some success. Nonetheless, it will be by no means an easy season. It might seem optimistic, but a round 10–20 finish feels likely.

Asa: Let me be clear, I do not think there is any scenario where this Eagles team could be good. What they could be is frisky. Grant is adamant about instilling intensity on defense, and I think there is enough buy-in from the players that BC could steal a couple games that fans don’t expect it to win. There is some talent among the new faces on the roster. BC should finish around the 10-win mark and be feisty enough to provide some proof of concept for the Grant era.

Emma: It’s unlike me to be a pessimist, but between coach and player turnover, not to mention a bottom-of-the-barrel finish last year, it’s hard not to be one. I think that Grant will bring much-needed change to the program, but that change won’t translate for at least a couple of years. I anticipate that BC could finish 8–22, and though the result isn’t great on paper, if Grant plays his cards right, he could build a successful program in the same way that he did at Charleston. 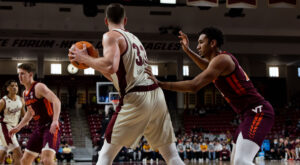 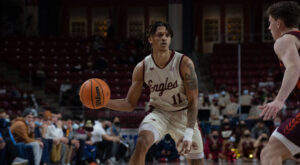