CAMBRIDGE, Mass. — Drew Helleson earned a spot on the SportsCenter Top Ten for his game-winner with one second on the clock last season. It felt like a once-in-a-lifetime, highlight-reel play, but between Boston College women’s hockey and Harvard on Tuesday night, the teams did it twice.

“We’ve got to be a little bit better for a full 60 minutes when we’re playing a good team,” BC head coach Katie Crowley said after the game.

“The forecheck was one of our focuses for today,” Crowley said. “So I thought we did a fairly good job when we’re in their zone. … I wish we were in there a little bit more, to put more pressure on them, but we’ve got to start attacking more offensively.”

Despite BC’s dominance in possession through the first 20 minutes of the game, Harvard’s few and far between chances were fruitful, producing 10 shots on goal despite just a handful of opportunities in the Eagles’ zone. BC, on the other hand, mustered just half that total in the same amount of time.

Goaltender Abigail Levy saw most of those shots into her glove with relative ease, or she extended her 6-foot-1 frame for a pad save, but Harvard broke through the wall with just 1.5 seconds left in the first period.

Bloomer deflected a shot from the point, and it snuck past Levy’s left shoulder just before the buzzer rang to give the Crimson a 1–0 lead heading into the first intermission.

Despite an early goal, and five on the day, Levy finished with 35 saves after the Crimson peppered her with shots, including 15 in the third period alone.

“The goals they scored were, you know, certainly not her fault,” Crowley said of Levy. “She’s the last one back there, but there were a lot of things that happened in front of her that we need to be better at.”

Abby Newhook responded with a goal to tie it up just over four minutes into the second period. As the puck bounced in and out of Harvard goaltender Lindsay Reed’s glove, Newhook was there on the doorstep to poke it in.

Just about three minutes later, Sidney Fess went to the box for hooking, marking BC’s first penalty kill attempt of the night. Only a few seconds into the power play, Harvard’s Maryna Mcdonald gave the Crimson a 2–1 edge. Becca Gilmore scored her first of the night to take a 3–1 lead in the second period, and Guay cut the lead back to one not long after.

The Crimson capitalized on one other power play of the night, though it had two more player-up opportunities. Gilmore scored her second of the night while a player up, all but locking in a win for Harvard.

“When we go on the penalty kill, it seems to kill our momentum,” Crowley said. “And then it takes us a bit to get back into the way we’re playing.”

The Crimson added one more insurance goal in the third when the game was already beyond reach.

On the first day of the college basketball season, Crowley gave a nod to BC men’s basketball head coach Earl Grant’s motto.

“We’re not attacking enough,” Crowley said. “It’s almost like we’re trying to play a little bit too pretty and not like not gritty, you know, so we’ve got to get back at it.” 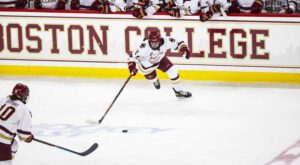