The two teams traded momentum throughout the game, each taking multi-minute turns on offense and scoring in bursts. The Rams ultimately won 57–49, but the score might as well have been 5–4, as each momentum shift essentially served as a point for either team. On its home court, Rhode Island scored first before surrendering its spot at the plate to BC, who responded with a run of its own, and the pattern continued.

In baseball, though, the home team bats last, and Rhode Island (3–0) held on to drive home the winning run, handing BC (3–1) its first loss of the season.

Rhode Island capitalized on its home-court advantage to gain momentum out of the gates, starting the game with a crushing 8–0 run featuring two 3-pointers. BC found a hole in Rhode Island’s momentum after a goaltending penalty paused the game and gave the Eagles their first points of the night. T.J. Bickerstaff quickly connected on a 3-pointer to cut BC’s lead to three, and Demarr Langford Jr. and Quentin Post combined to give BC the lead at 10–8.

“You want to get out to a good start and keep it even so the crowd won’t get too loud,” BC head coach Earl Grant said in his postgame press conference. “They came out and they had good momentum. They were feeding off the energy of the crowd, and they made two threes. … Got to give them credit.”

As has been a pattern for BC basketball in recent years, the Eagles’ lead did not last long. Rhode Island promptly stole the momentum back, forcing a 13–1 run to re-establish its lead that lasted throughout the rest of the half.

The Eagles swung momentum their way for a quick 9–0 run to cut their deficit back down to one with five minutes left in the half, but BC never managed to take back the lead. After 15 minutes of momentum swings, the rest of the half was far more competitive.

BC and Rhode Island traded shots, though BC’s energy waned through the final minutes, and the half ended with a 25–36 Rhode Island lead.

“Typically on the road you’re gonna have to weather a storm … with the home team feeding off their crowd’s momentum,” Grant said. “Tonight, I thought the first four minutes was the storm, and we got [their lead] down to two. After that, we settled in and the game stayed pretty even.”

The second half featured momentum swings almost as drastic as in the first. Just under two minutes after halftime, Rhode Island scored the first points of what would become a seven-point run acquired entirely through free throws.

A Bickerstaff layup with just under nine minutes remaining in the half gave the momentum back to the Eagles, resulting in a 10–2 BC run to cut the Eagles’ deficit back down to five points with just over five minutes remaining. A five-point decifict was as close as the game would get, as another Rhode Island momentum swing quickly drew the Rams’ lead back out to 10 where it hovered for the remainder of the game.

The Eagles shot 12-of-17 from the line, while Rhode Island shot 13-of-19. Neither team shot more than 25 percent from the field in the second half, but BC managed 11 more second-half shots than Rhode Island.

“They have a good atmosphere here,” Grant said. “This is the first time we’ve played in front of a hostile environment together. … We couldn’t hear a lot of times, so we weren’t as poised as we needed to be.”

BC can find a bright spot in Drexel transfer Bickerstaff, who had a career game, earning his first-ever double-double and his first-ever game with over 20 points. He led the Eagles with 22 points and 15 rebounds in just 35 minutes on the court. 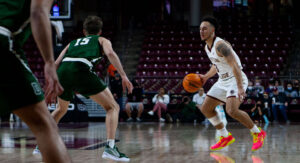 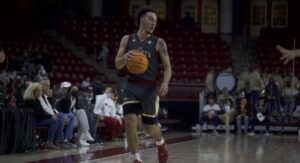 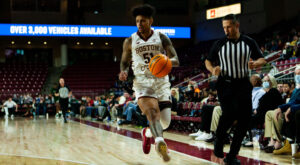