It is that time of year, folks. The time of year when the weather is getting cooler and gray dorm room walls are decked in multi-colored lights and tinsel. I already know that visions of curling up on my couch—surrounded by slightly tacky but sentimental holiday decor—to watch a movie will provide sustenance during the next two treacherous weeks of final essays and exams.

There’s a litany of classic holiday stories that we can all watch around this time. But holiday movies to me don’t have to explicitly be about Christmas. They’re the entertaining movies that you want to watch after a long day of giving gifts, catching up with family, and eating too many cookies. My only requirement for these recommendations was that it appears that the temperature drops below at least 50 degrees at one point in the movie. Or that a character gets the cold shoulder from a friend but they reach a wholesome reconciliation by the end. Or that there’s a cold-blooded murderer.

To watch with your whole family after everyone is tired from cleaning up every scrap of wrapping paper:

When cleaning up the mess that your friends and family left behind, you might be reflecting on the interesting cast of characters that filled your home that day. In the 2019 murder mystery movie Knives Out, a similarly strange group of people gather at the extravagant home of the family’s patriarch, Harlan Thrombey (Christopher Plummer), to celebrate his birthday. But when Thrombey is found dead in his bedroom, the movie becomes a captivating whodunnit story.

The movie sounds like a common tale, but the star-studded cast, including Chris Evans and Jamie Lee Curtis, crafts it into an enjoyable family drama. A hilarious script that features frequent sibling squabbles offers pure entertainment. Family politics and secrets keep you guessing who will be the culprit.

To watch if you’re disappointed that there isn’t any snow on the ground and it wasn’t a White Christmas:

No snow in the forecast? Take a trip to Minnesota with this quirky mystery film courtesy of Joel and Ethan Coen. Frances McDormand stars as the practical yet compassionate detective trying to solve the case of a highway murder. There are multiple entertaining storylines woven together in the film, such as car salesman Jerry Lundegaard (William H. Macy) coping with the ramifications of his shady career dealings. The Coen brothers transform a normal town and the mundane routines of its residents into the scene of a crime while adding plenty of dark humor throughout the film.

This acclaimed art-house film will keep you guessing about the motivations behind characters’ actions. Despite the characters’ flaws, viewers will still find themselves rooting for each of them as they make poor life choices and face the consequences. They do it all with the ultimate Minnesotan accent. It’s the perfect combination of mystery and artistic filmmaking with impressive cinematography that captures the bareness of the vast Midwestern landscape and the run-down town of Fargo. The film offers an entertaining watch that will still stimulate your critical eye after a day of lounging around.

To watch if you need another reminder of the world of consumerism that we live in:

Around the holidays, there’s always a scramble to buy the perfect presents for your friends and family. We often get lost in the need to acquire the trendiest new clothes. This iconic 2006 film gives viewers a peek into the inner workings of the fashion world. Anne Hathaway plays the ambitious Andrea Sachs who stumbles into an assistant position at a magazine and is then at the beck and call of her intimidating boss, Miranda Priestly (Meryl Streep). Sachs’ evolution reveals the value that our culture places on style. Asking for those Dr. Martens boots this holiday isn’t just about adding a few more inches to your height. They’re also a status symbol. They say “I may not listen to punk music but I look cool enough, so it’s plausible that I might.”

Beyond this more serious message, the clever script is packed with snarky insults and captivating dialogue. With an entertaining storyline, this movie engulfs viewers in the exclusive world of fashion and could be a thought-provoking end to a day of gift giving and receiving.

To watch if there wasn’t enough family drama at your holiday dinner and you’re looking for more:

This hidden gem of a film is a psychological drama directed by Luca Guadagnino, who is known for directing Call Me By Your Name. This film is a must-see for anyone obsessed with Tilda Swinton. Her acting chops are on full display as she plays rock star Marianne Lane, who has retreated to a small Italian island while she is on vocal rest. Swinton is captivating even without delivering spoken lines.

The film centers around the complicated relationship dynamics that emerge when Marianne’s ex-husband, Harry Hawkes (Ralph Fiennes), interrupts Marianne’s vacation with her young boyfriend. To complicate things even further, Harry brings along his estranged daughter Penelope (Dakota Johnson). The tension building while the group of four inhabits the same house might sound familiar after a day of holiday parties. The film is captivating, as the audience learns of each characters’ past and conflicts boil over as they wander around the picturesque Italian island.

To watch with your younger cousins when they’re lingering at your house and are on a sugar high:

Harry Potter and the Goblet of Fire

Regardless of whether you’ve seen the Harry Potter movies once or 15 times, they’re always entertaining and comforting. Harry finds himself unwillingly enrolled in the Triwizard Tournament, competing in dangerous magical challenges and, as usual, accidentally making enemies along the way. The fourth movie in the series exudes a particularly satisfying amount of holiday cheer with its Yule Ball scenes. I hereby petition to replace Boston College’s senior year formal with a reenactment of the Yule Ball in Bapst Library. For me, the familiarity of the movie can transport me back to my younger years, when the holidays were still imbued with magic. The film is a great option if you’re looking for an easy watch to unwind and its kid-friendly content offers an opportunity to calm the holiday-crazed cousins. 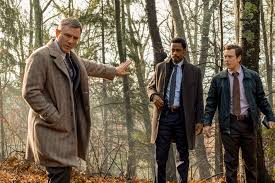