Christmastime is here in the City of Newton. Tall trees adorned by flashy LED lights, shiny ornaments, and stretches of garland turn neighborhood windows into winter wonderlands. According to Historic Newton, Christmas celebrations have been a staple of the city almost since the beginning of the settlements that preceded it.

Historic Newton, a partnership between the Newton Historical Society and the City of Newton, hosted an event over Zoom on Dec. 5 detailing the history of Christmas in the Newton and the Greater Boston area. The event described the evolution of attitudes surrounding the holiday primarily through the histories of two centuries-old Newton homes: the Durant-Kenrick House and the Jackson Homestead.

The Christmas histories at the two homes have a lot to say about the history of the holiday in Newton and across the country, according to Clara Silverstein, community engagement manager at Historic Newton.

“This program came about because we realized that we had some interesting stories to tell about the way people celebrated the holidays at the Durant-Kenrick House as well as Jackson Homestead that we really hadn’t had the chance before, … stories that connected to larger stories about holiday celebrations in Newton and beyond,” Silverstein said.

The history of Christmas in Massachusetts began in the first English colonial settlement in New England, the Plymouth Colony, according to Cynthia Cowan, house and grounds manager of the Durant-Kenrick House. The Christmas celebrations that took place in 1621, the first year the Pilgrims settled in the area, surprised the then-governor of Plymouth Colony, William Bradford, according to Cowan.

“When [Bradford] returned to town, though, he found [the settlers] engaged in games and other activities that he felt were not befitting a religious holiday,” Cowan said. “From thenceforth, [Bradford] decreed that Christmas would not be celebrated in the Plymouth Colony.”

But, throughout the following century, the New England area warmed to the idea of Christmas, Cowan said. By the 1760s, groups around the Greater Boston area engaged in partying and dancing that was reminiscent of celebrations in England.

“On Dec. 16, 1773, the infamous Boston Tea Party occurred, and it fell to Edward Durant III and other leaders in town to determine how Newton would react to this event,” Cowan said. “They endorsed the patriot cause and set Newton on a march to war.”

The Kenrick family, though, celebrated the holiday, as was common throughout New England at the time.

“We see [Mary Kenrick-Taylor], who lived in [the Durant-Kenrick House] throughout the last two-thirds of the 19th century, in her diary entries, as much as a month before Christmas, anticipating the celebration, … producing Christmas gifts, and other fancy things in anticipation of their celebration,” Cowan said.

The popularity of the holiday increased gradually through the 19th century, Cowan said.

The food and gift giving common in today’s holiday were part of the Christmas celebration at the Jackson Homestead, too, a video featured during the program showed.

In the video, Silverstein said that the Jackson Homestead operated as a command center, distributing gifts such as gloves, clothes, candy, nuts, and crackers to poor children in the area under the name Santa Claus Agency.

“The nursery of the Homestead was given off to the toys and comforts that might be sent for the poor, and it is always overflowing by Christmas,” Silverstein said in the video.

A final video shown toward the end of the program described several centuries-old Christmastime recipes of plum pudding, gingerbread, and eggnog that researchers found while studying the Jackson Homestead.

To show the growing popularity of the Christmas season, Silverstein quoted from a poem written by Ellen Jackson in 1895.

“Get ready for the Jubilee, hurrah hurrah, the Christmas cake is ready here, the pies and pastry too, my dear, and we’ll all be gay when Christmas comes ’round again,” Jackson said. 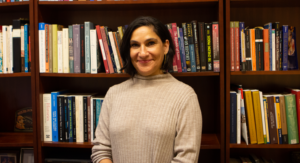