On Dec. 16, the United States Senate voted 75–18 to confirm Nicholas Burns, a member of the Boston College Board of Trustees and BC ’78, as the new United States ambassador to China, according to Reuters.

Burns has served in the U.S. government for 27 years, according to the Harvard Kennedy School’s Belfer Center website. He served as ambassador to Greece from 1997 to 2001 and ambassador to NATO from 2001 to 2005. He also was a member of former Secretary of State John Kerry’s Foreign Affairs Policy Board from 2014 to 2017.

In 2017, Burns received the Ignatian Award from Boston College, which is given to individuals who “live out the Ignatian mission of ‘men and women for others,’” according to a BC News release. Burns was also awarded the Public Service Award by the BC Alumni Association in 2001. He received an honorary doctorate from BC in 2002.

Currently, Burns serves as the professor of the practice of diplomacy and international relations at the Harvard Kennedy School and as the executive director of the Aspen Strategy Group, according to the White House website.

President Joe Biden first nominated Burns for the role of ambassador on Aug. 20, according to the White House website.

Biden’s nomination of Burns also marks a shift away from a recent pattern of appointing former politicians as ambassadors to China instead of career diplomats, according to Reuters. In the role, Burns will face “increasingly fractious relations” between the U.S. and China.

According to Reuters, The White House announced on Dec. 7 that U.S. government officials will boycott the Olympics due to China’s human rights “atrocities.” It is not clear whether Burns will head to China before the 2022 Winter Olympics in Beijing.

In a tweet on Thursday, Burns expressed his gratitude for the position.

“I am grateful to President Biden for this opportunity to represent the United States in the People’s Republic of China,” Burns wrote. “And I am looking forward to working with our superb career professionals at our embassy and consulates who are doing such vital work for our country.” 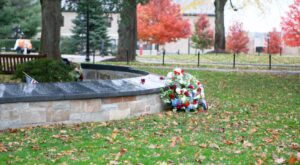