Previewing 2021 Football: Vs. East Carolina In The Military Bowl

Boston College (6–6, 2–6 Atlantic Coast) and East Carolina (7–5, 5–3 American Athletic) square off in the 2021 Military Bowl on Monday, Dec. 27 from Navy-Marine Corps Memorial Stadium in Annapolis, Md. This will be BC’s first bowl game under head coach Jeff Hafley, who holds a 12–11 career record in his second season in the program. In the 2020 season, the Eagles elected to forgo their opportunity to play in a bowl game.

Entering the 2021 season, the Eagles jumped out to a 4–0 start, but a lingering hand injury to quarterback Phil Jurkovec had a derailing effect on the season, and the road has been a bumpy one since. The Military Bowl marks BC’s 29th bowl appearance in school history and will be the first-ever meeting between BC and East Carolina.

After a month-long hiatus since the Eagles faced off with ACC opponent Wake Forest on Nov. 27, the Military Bowl is an opportunity for many of BC’s younger players to get valuable snaps and game-time experience. Depending on injuries and opt outs, a bundle of fresh names could arise on the depth chart. With Hafley stringing together one of the best BC recruiting classes in school history, according to 247Sports and Rivals, ending the season on a high note could snowball into next year’s momentum.

The game will be broadcast nationally on ESPN.

The Eagles are 14–13 all-time in bowl games, with BC’s 0.519 winning percentage ranking 39th nationally in bowl history. The Military Bowl is a homecoming for 13 Eagles from the Maryland, Virginia, and Washington, D.C. area.

The Eagles’ first postseason victory came at the 1941 Sugar Bowl in New Orleans, one year after BC fell to Clemson 6–3 in the Cotton Bowl—BC’s first-ever bowl bid.

Doug Flutie led BC to the 1982 Tangerine Bowl, the Eagles’ first taste of the postseason in 39 years. Three years later, Flutie trampled Houston with three touchdown passes in the 1985 Cotton Bowl.

The Eagles went on a postseason tear with eight bowl wins in a row, starting in 2000 at the Jeep Aloha Bowl. The final win of the eight-year postseason streak capped off a brilliant finish to culminate the collegiate career of quarterback Matt Ryan.

Ryan led the Eagles to a three-point victory over Michigan State at the Champs Sports Bowl, completing 22 of 47 passing attempts for 249 yards and three touchdowns, as the Eagles kept the nation’s longest bowl game win streak alive.

BC seized its first bowl win since 2007 with a 36–30 victory over Maryland in the 2016 Quick Lane Bowl, and its bowl game in 2018 with Boise State was ruled a no contest due to inclement weather.

What to expect from East Carolina:

BC finished the 2021 regular season with the ACC’s best passing defense and ranked fourth in the nation in passing yards allowed with 173.5 yards per game. BC’s final two opponents, however, exposed defects in its deep-attack protection, as the Eagles allowed six touchdowns through the air—more than their previous eight games combined.

East Carolina quarterback Holton Ahlers throws the football often, with speed, and in quick stints. The redshirt junior had the 12th-most dropbacks in the country and most in the AAC this season with 417. He had the third-fastest time to throw at 2.53 seconds and the second shortest average depth of target in the AAC at 8.2 yards. Ahlers averages just 7.6 yards per throw and relies on short yardage with yards after the catch for big gains downfield. In this fundamendalist scheme, Ahlers finds voids in zone coverage schemes while deep shots at the second and third levels are sporadic. Nonetheless, the Pirates rank 23rd in the nation in passing offense with 270.8 total passing yards per game.

Ahlers’ involvement in the run game is limited. With their pass-heavy offense, the Pirates’ run game consists of primarily zone reads. This season, 301 of East Carolina’s rushing attempts were zone runs while 79 were gap runs. Freshman running back Keaton Mitchell accumulated 1,132 yards and nine touchdowns from the ground. The Pirates will look to be more conservative in turning the corner in short-down conversions.

East Carolina ranks 82nd in the nation in rushing defense, allowing 161.3 yards per game. With Jurkovec’s health still uncertain, BC will need to run the ball effectively, as it has throughout the year, to beat East Carolina. The Eagles rank 61st in the nation in rushing offense with 165.2 yards per game from the ground, and running back Pat Garwo III pieced together a 1,000-yard season on the flanks of a heavy-loaded offensive line in Zion Johnson, Alec Lindstrom, and Christian Mahogany. The trio of interior linemen landed some of the nation’s top accolades this postseason.

The Pirates excel in third and first-down defense, including red zone defense, which makes game planning more difficult. The Eagles will have to keep an eye on a few pivotal defensive playmakers in East Carolina, but for the most part, the Pirates rank in the bottom half nationally in most statistical categories.

East Carolina has a versatile secondary in cornerback Ja’Quan McMillian and safety Jireh Wilson, each of whom aided the Pirates on their way to 15 passes intercepted this year. Since starting at ECU as a true freshman in 2019, McMillian has started all 33 games throughout his time in Greenville, earning him All-AAC preseason honors in both 2020 and 2021. McMillian has the second-most total tackles on the ECU roster with 56 and is tied for second in the nation with five interceptions. He leads the country in total passes defended with 21 and has allowed a passer rating of 54.1 when targeted, the fourth best in the AAC. McMillian has the third-best overall grade among FBS cornerbacks at 87.7 and the best coverage grade, 91.1, among all FBS defenders, according to Pro Football Focus.

BC quarterback Phil Jurkovec finished with 3-of-11 passing for 19 yards, with one touchdown and two interceptions, in BC’s last matchup of the season against Wake Forest. That performance will not cut it against East Carolina, which concluded the season with wins in four of its last five games. If the Eagles can stick to a disciplined run game with Garwo and split apart empty holes in the formidable Pirates’ secondary, then they have a good shot. Hafley and offensive coordinator Frank Cignetti Jr. will need to gameplan around the zone-heavy looks in the Pirates’ defense to find its biggest playmakers in Zay Flowers, Jaelen Gill, and Trae Barry.

Still, running the ball will be crucial for keeping Jurkovec steady from a mental standpoint and arriving at schemes on a tight window. Jurkovec flashed his run-game management in the Wake Forest loss with 66 rushing yards on 11 carries, and two weeks prior in the Eagles’ 41–30 offensive obliteration of Georgia Tech, with 71 yards on eight carries and three touchdowns from the ground.

“I’m on a mission to win this game,” Jurkovec said in a post-practice press conference on Dec. 11. “6–6 isn’t good enough for us, and it’s been like that way too long here, so we’re on a mission to make that better.” 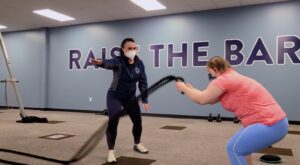