Groome Evaluates the Essence of Catholic Education in Recent Book

Boston College students begin their college careers knowing they are embarking upon four years of a Catholic education. Some students, though, may not know exactly what it means to immerse themselves in a Catholic-oriented education. Thomas H. Groome, professor of theology and religious education, investigates the foundations and purposes of Catholic education in his latest novel, What Makes Education Catholic.

“It dips into the deep and universal values of Catholic faith and tries to reflect on what these values would mean when implemented as the curriculum and life of a Catholic school,” Groome said.

Groome said he has brainstormed ideas for What Makes Education Catholic his entire professorship of at least 45 years. Though he put off writing the book for many years, Groome said the COVID-19 pandemic gave him the opportunity to write his new book. After having more time to write it during quarantine, Groome eventually published the novel in November 2021.

“I have to say, I’ve been writing this book for about 40 years,” he said. “With the pandemic, I finally had the time and the confinement to sit down and write it. … I’ve written about 12 to 15 books, but this is my favorite.”

Groome said he did not always plan on becoming a professor nor writing a book. Rather, in his early childhood, he thought that he would follow in the footsteps of his older brother and become a priest.

“When I was about nine, I wrote to my older brother who was a … Catholic priest, and I wrote to him and told him that I, too, was going to become a priest,” Groome said. “When I finished high school in Ireland, I went into a college seminary and then went on into theology after college, and I was ordained a priest.”

Born and raised in Ireland, Groome attended an all-boys boarding high school. He said that at the time, rural Ireland had few high schools, so children who lived in rural areas had to travel to a city to attend high school. He then attended St. Patrick’s, Carlow College, located in the center of Ireland, where he earned the Irish equivalent of a master’s in divinity degree in philosophy as a preparation for theology.

“If you were thinking of going to seminary for four years of theology, the best thing to do in college was philosophy, because philosophy prepared you to study theology, or so we thought,” Groome said.

“It was the bishop of Dodge City that called me to ordination,” he said. “And I went out to Dodge City, Kansas … I worked there for three years at the Cathedral Parish, and after three years, the Bishop there was looking for somebody to send back for further studies. He invited me to go back to Fordham [University] and do a degree in religious education because he was looking for somebody to be principal of his Catholic high school in Dodge City.”

After receiving his master’s degree from Fordham, the Union Theological Seminary at Columbia University awarded him a scholarship to complete his doctoral work in theology and education.

When Groome earned his Ed.D. from Columbia, he planned on returning to Ireland, he said. It was then that BC offered him a position, and he has remained at the University since. Groome said he continued serving as a priest during his first eight to nine years at BC.

Groome taught an undergraduate theology core course for about 25 years. About 14 years ago, BC’s Institute of Religious Education and Pastoral Ministry joined the Weston Jesuit School of Theology, the Jesuit seminary in Weston, Mass., and formed the School of Theology and Ministry where Groome has taught ever since.

“I’m in my 46th year [at BC], and I taught theology in the theology department as well as being director for many, many years of a graduate program in theology and education,” he said. “I direct the Ph.D. and doctorate [program] in theology education.”

In addition to teaching collegiate-level theology courses, Groome also created two children’s curricula—published in 1985 and 1986—that Catholic parishes and schools throughout the U.S. have used. He has also written a high school theology curriculum.

Groome said he drew on both his experiences with religious education for children and for college students when he wrote What Makes Education Catholic. In this book, Groome explores how the Catholic education is transforming to include people of diverse religious backgrounds, both as faculty and as students. Another recent change in Catholic schools, Groome said, is that lay people are more commonly leading them.

“There was a time in this country when 95 percent of the faculty and staff of Catholic schools were avowed religious brothers, sisters, and priests, and now, less than three percent are religious and the other 97 percent are lay people,” Groome said. “I know this because of my travels and places I’ve taught and lectured like in Pakistan, Korea, and Hong Kong where the Catholic schools are blooming.”

Catholic schools tend to be sought after, Groome said, because they are typically perceived as providing a stronger education than public schools.

“I think that one of the reasons is that [Catholic education is] based on great spiritual values which are universal,” he said. “I think [these values] can benefit any person of good will, regardless of their religious affiliation. Many of the Catholic students in our Catholic schools now are more cultural Catholics than practicing, but the faith tradition can still enrich their lives with very fine values.”

Groome’s book also explores these universal values, which he claims can enhance the life of any student or teacher, regardless of their faith and identity. Groome said students and teachers can both enrich their faiths and receive a quality liberal arts education at Catholic schools.

Klaus Da Silva Raupp, an advisee of Groome and GMCAS ’22, said he decided to join BC’s graduate program because of Groome and his work. After being accepted to the program, Raupp chose Groome to be his adviser.

“I started learning about Dr. Groome’s work because I had a one-year transition period doing a [master of theology], which is an advanced master program at the [School of Theology and Ministry],” Raupp said. “It was an easy decision when I knew about his work and his influence on theologians and educators.”

“In terms of What Makes Education Catholic, [Groome] understands that [religion] is for the whole being,” Raupp said. “It’s not only about knowledge but conation, something that encompassess the whole being being educated—consciousness, desire, will, and action.”

Dennis Shirley, a professor in BC’s teaching, curriculum, and society department and Gabelli Faculty Fellow at the Lynch School of Education and Human Development, said Groome’s book reevaluates the purpose of education as a whole.

“What Makes Education Catholic shows that there is another, better way, beyond the recent fixation on education as a producer of human capital,” Dennis said. “Tom’s writing sparkles with insights on every page and his capacious knowledge, not just of Catholic theology, but also of contemporary education in general, makes this a book that belongs on every thinking person’s bookshelf.”

The book also addresses the challenge of inviting others to come to a Catholic school without proselytizing the faith of people from other traditions, Groome said, which he experienced while teaching one of his undergraduate courses at BC.

“We’ve always taught that there are just two ways to teach a religion,” he said. “One is to teach it objectively … not attempting in any way to influence people’s lives or their values. The other is to teach it in such a way that people embrace it and become it. But there’s a middle ground between the objective teaching and the catechizing.”

Melodie Wyttenbach, executive director of BC’s Roche Center for Catholic Education and friend of Groome, said that in addition to the book’s analysis of Catholic schools, it also celebrates their effect on the world.

“In a time where schools have proven to provide critical, essential, and necessary services to children during the most challenging of times, all schools need to be celebrated for the many gifts they bring to our communities,” she said. “This book helps others understand what Catholic schools are and the foundational elements of this distinct approach to education.”

Groome’s book also touches on how a Catholic education is not confined to the classroom, he said. It discusses how Catholic education can empower students’ personal lives and prepare them to contribute to the common good of society. 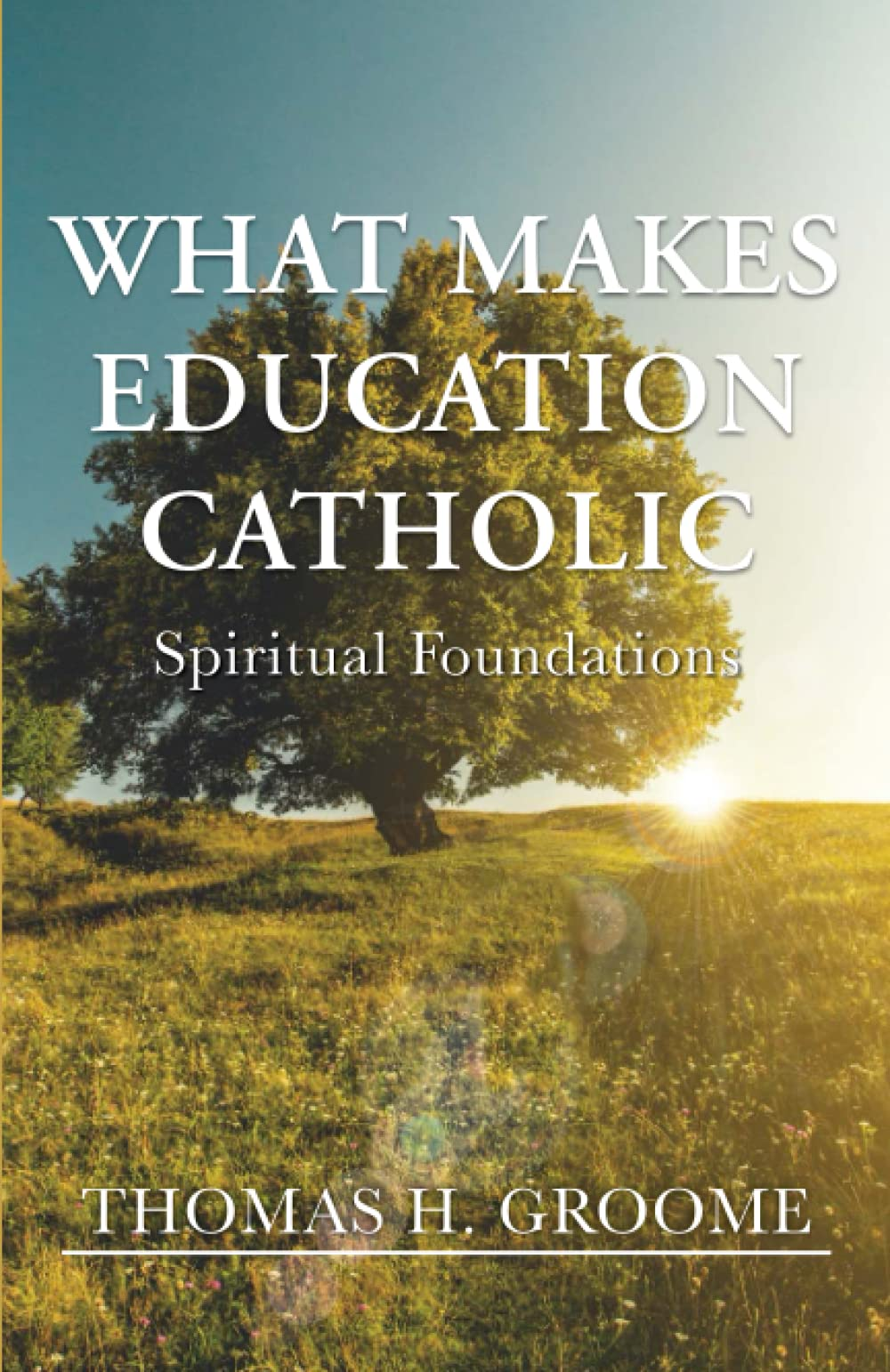