The former director of faculty outreach and program assessment for the University’s Mission and Ministry division, Burns took over as interim dean following the retirement of the Woods College’s namesake, Rev. James Woods, S.J. who served as dean for 44 years.

“Fr. Burns has worked tirelessly to strengthen the Woods College undergraduate and graduate programs over the last two years,” University Provost and Dean of Faculties David Quigley told the Boston College Chronicle. “He has partnered successfully with faculty and colleagues from around the University and we are poised to make great progress going forward. The Woods College has long advanced our University’s distinctive mission and I am confident that Dean Burns will continue that tradition in creative and powerful ways.”

Before coming to Boston College in 2010, Burns was co-chairman and associate professor at the Graduate School of Psychology at his alma mater, the University of St. Thomas in St. Paul, Minn. He has also served in academic roles within his field of psychology at both Boston University and Harvard Medical School.

Burns said that, when he was first appointed interim dean of the Woods College, his focus was on clarifying policies, connecting to the larger university community, and adjusting to the shifting higher education market, particularly the post-traditional learner environment. As permanent dean, he said those initiatives will move forward, with efforts ranging from finding new methods to reach adult learners, publicizing the college’s varied degree options, and advancing the Woods College brand in the Boston area and beyond.

In the realm of academics, Burns emphasized the ever-changing and flexible nature of the programs in the Woods College, which attracts students with varied needs and busy schedules.

“Being a dean in a non-traditional format means needing to be on the alert to the different and unique ways that we can adjust our offerings and delivery methods to complement rather than deter from the complex lives of our students, many of whom work full-time and have family obligations,” Burns said in an email. “Because of these obligations our students may be registering for two classes one semester, one class the next, and three or four the semester after that. This also means having a very hands-on approach to advising that is not solely focused on academics but includes taking into account the broader considerations of our students’ lives.

“We hope to take some of our current offerings and transform them through technology into completely on-line courses while some other courses will become hybrids that will include elements of both on-line instruction and in class instruction,” Burns said.

Certain demographics of the Woods College student body are also of particular focus as the dean’s office seeks to broaden educational opportunities, Burns said, to people including immigrants, active members of the military, and veterans. He also noted that the Woods College is reaching out to local employers to determine what qualities and skills would make graduates the strongest applicants.

In addition to 14 undergraduate majors and eight certificate programs, Burns pointed out that the Woods College is expanding its graduate degree offerings, such as a new master’s degree in applied economics that will launch in 2015. This program, Burns said, resulted from collaboration between the Woods College, the BC College of Arts and Sciences economics department, professors of economics at Boston area universities, and industry professionals. Other graduate programs that are in development include master’s degrees in cyber-security, forensic science, and public relations.

Burns said that Boston Mayor Martin J. Walsh, WCAS ’09, who attended BC and completed his degree after entering the workforce as a laborer at a young age, has influenced current and prospective students.

“We have already seen a greater interest in the Woods College since Mayor Walsh has taken office,” Burns said. “He not only proudly and publicly comments that he received his education at Boston College through the Woods College but he also shares his story of returning to school later than traditional aged students. His story is similar to some of our other grads, be they police or fire chiefs, lawyers, judges, economists, businessmen and women, who have come through the Woods College. And their stories are not unique in that many of our students are returning to college after having tried it right out of high school and finding it didn’t fit at that time while others had to delay college all together.”

Featured Image courtesy of the Office of News and Public Affairs 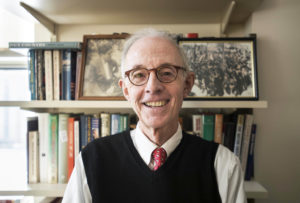