“Refuse to lose.” That is the motto of the Boston College field hockey team, according to head coach Ainslee Lamb. On Sunday, against the No. 2 team in the nation and reigning national champion University of Connecticut, the squad did just that. This game ended in a 3-2 Eagles victory.

The first half was marked by solid defense on both sides, and a standout performance by junior goalkeeper Leah Settipane. With three saves in the first 35 minutes of play, Settipane made it clear that she was not going to let much by her. The Huskies outshot the Eagles eight to four, but the combination of great defending and excellent goalkeeping meant the shots UConn got were never too threatening.

If the first half was marked by minimal offensive chances and defensive battles, the second half would be categorized as a gun-show. The scoring started early, with UConn getting on the board less than five minutes into play. Chrissy Davidson of the Huskies finished off a great pass from Sophie Bowden, making the score 1-0.

It took BC a few minutes to bounce back from the Connecticut goal, another close chance coming soon after for the Huskies. During an offensive surge by the away team, Settipane stepped out of the goal to make a save. The ball bounced back to the stick of a Huskie attacker, however, as she faced an empty net. Seeing the dire situation, BC sophomore Emily McCoy stepped in front of the net and made a stick save. The game could have gone downhill, but the quick thinking of BC’s defense helped avoid disaster.

The Eagles began attacking with vengeance. UConn finally gave way with 13 minutes left in the half, when sophomore Brittany Sheenan finished a rebounded shot, scoring her sixth goal of the season.
UConn was quick to respond, however. No more than four minutes later, the Huskies were given a corner. A well-placed insertion and even better stick-stop, Sophie Bowden put UConn up 2-1.

The BC offense was surging, but could not find the back of the net. That’s when Lamb decided to pull the goalie, to give the Eagles an even better chance at tying the game up.

“They know if we are down, I am pulling the goalie,” Lamb said. “We will battle until the end.”

The decision paid off. With 1:09 left in regulation, the Eagles were given a corner and Eryn McCoy put the ball in to the back of the net assisted by Brooke Matherson.

And so, overtime began. Once again, the offensive chances were bountiful, with both teams having multiple corners. Counteracting these surges, however, was the solid goalkeeping this game had become so familiar with. The first overtime finished with both teams still hungry for a victory.

As the second O.T. began, it was clear both teams were starting to feel the fatigue of playing 85 minutes of field hockey. Each was given multiple corners, but neither could get the ball past the goal line.

The format of the shootout began with a best-of-five series. Katlyn Soucy was able to finish the Eagles’ fourth chance, but UConn responded and buried its final shot. This brought in a new, best-of-five series. With more scoring in the second round, BC took an early lead. UConn was able to answer, and then take the lead, before the Eagles buried their last three opportunities, the final coming from senior captain Emma Plasteras. Plasteras’ goal was good enough for BC to hold onto victory.

While the victory over such a highly ranked team and respectable organization was huge, this game offered an emotional win as well. This puts the team up there with national-champion caliber teams, but more importantly, Coach Lamb wants it to be fun for the players. 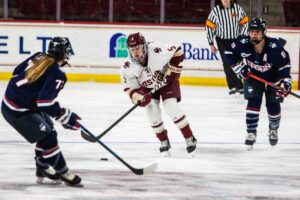