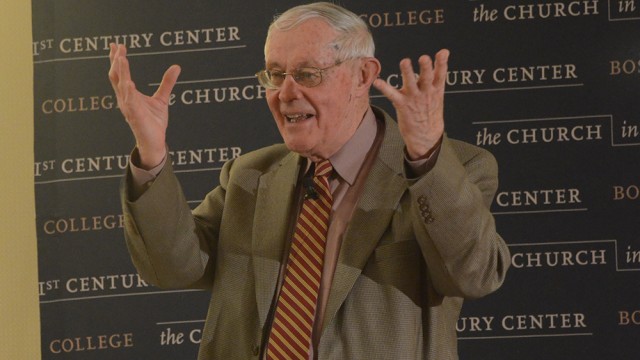 Hello Friend: The Legacy of Rev. William B. Neenan, S.J.

“Hello friend,” Rev. William B. Neenan, S.J. said to everyone he passed.

“Bill had thousands of friends,” said Clare Dunsford, associate dean of the College of Arts and Sciences. “When you walked across campus with him it would take forever to get from Gasson to McElroy—he knew so many people.”

“‘Hello Friend’ is a tradition of the early Jesuits who referred to each other as ‘Friends of the Lord,’” said Gemma Dorsey, associate director of Major Giving, Capital Giving, and Development, in an email. Dorsey travelled around the U.S. to countless alumni events with Neenan.

“‘Hello Friend’ was the hallmark of how he lived his life. It could be … engaging a stranger on an elevator, greeting them with ‘Hi Friend, have you ever met someone from Iowa?’ If they said no, he would say, ‘Well, cross that off your bucket list,’ while proceeding to learn their life story between the lobby and 15th floor,” she said.

“Personal interactions were his life,” said Joseph Quinn, a professor in the economics department. “If he was on his way to a meeting, he would still stop to talk to you and simply be three minutes late to his meeting.”

On June 25, 2014, Neenan’s signature greeting was silenced as he passed away in his Jesuit residence due to health complications with bronchitis and other illnesses.

Quinn met Neenan even before his time on the Heights. “I knew him two or three years before he came to BC,” Quinn said. They met at the Institute for Research on Poverty at the University of Wisconsin, where the two spent many of their summers. “He always knew about BC, being a Jesuit, and he became the first Gasson Fellow.”

The Thomas I. Gasson chair is held by a distinguished Jesuit scholar in any field and is the oldest endowed professorship at BC. “Once he was here, he fell in love with BC and simply never left,” Quinn said.

Dunsford met Neenan in a very different way, but around the same time—about 35 years ago.

“My husband and I were at a party with St. Louis University grads in Boston at the Connolly House, and because the basketball play-offs were on, my husband went off to find a room with a TV,” Dunsford said. “When he came back, he brought Fr. Neenan with him, introducing him like, ‘This is my friend, Bill.’ From there we invited him over for dinner, and we have been friends ever since—he even baptized my son.”

Upon introduction, Neenan always made sure to mention one defining characteristic about himself.

“The first thing he always said in introducing himself or in speeches is that he was from Iowa, so I think it was a very big part of his identity,” Dunsford said.

“He was such a Midwesterner, and sometimes he would tease people on the East Coast about their accents,” Quinn said.
From his love of his home state stemmed perhaps the most popular program of the dean’s office: the state luncheons.

“Once it became known that Father Neenan came from the Midwest, a student by the name of Chuck from Omaha dropped by to introduce himself as a fellow Midwesterner,” said Mary Lou Connelly, Neenan’s personal secretary of 33 years, in an email. “Father invited him to lunch and as he always did, suggested Chuck bring along others from that area. This was the start of the Neenan Luncheons.”

The luncheons expanded from smaller Midwestern states all the way to California. Later, the luncheons were geared more toward freshmen who most needed a reminder of home.

“There were so many Californians we had to divide them by area code into two sittings,” Connelly said. “I tried to vary the menu for Father’s sake. The Texans asked for Southwestern fare: a taste from home.”

In addition to the popular state luncheons, Neenan created an annual Dean’s List of Recommended Reading that was highly anticipated by students, faculty, and alumni alike.

“Soon after arriving at BC, Father Neenan and a professor in the English department had a discussion of favorite books,” Connelly said. “It concluded with the professor suggesting that a list of Father’s favorite books be sent to incoming freshmen, and this became the ‘Dean’s List.’”

The 27-book Dean’s List was updated each year. Neenan would take three to four books off and add new ones.
“His list was a compilation of books you might not have thought of,” Quinn said. “For example, you wouldn’t find Hamlet on the list, but he did have a soft spot for BC authors.”

“I think only three books have been on the list since its inception,” Connelly said. “One that I recall is A Man for All Seasons.”

Neenan’s friendship did not end after graduation. He made an effort to maintain the friendships he had started by attending hundreds of alumni eventsofficiating countless weddings, and baptizing BC couples’ children.

“It was a job that Father Neenan thoroughly enjoyed because of his genuine love for BC alumni, parents, and friends, interest in their stories, and deep desire to advance the Jesuit, Catholic mission of the University,” she said.

Neenan left a rich legacy behind at BC that many of his friends intend to spread in his absence.

“Students can learn so much from him,” Dunsford said. “I think mostly they can learn to be genuinely interested and curious in other people.”

“He took the time to interact with people—from Bookstore staffers to waiters to trustees, he treated everyone the same,” Quinn said. ““He thought the best of everyone and was a positive force in every dimension.”

“He had the great ability to relate to anyone at their level,” Dorsey added. “He balanced his great intellect with tremendous kindness and compassion, and Father Neenan is one of the true giants in the history of BC whose legacy will live on in all the lives he has impacted over his lifetime.”