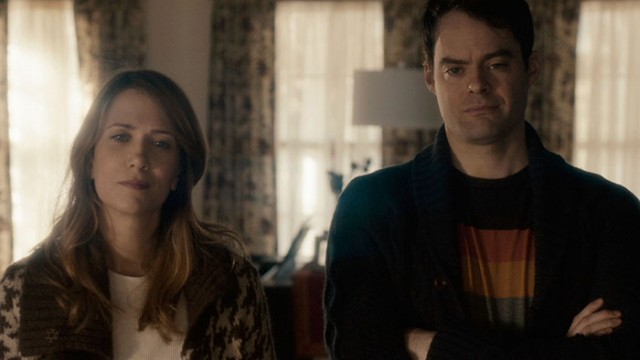 The surreal, depressing, and abnormal is much more prominent in the everyday than we might believe. In The Skeleton Twins, Milo (Bill Hader) and Maggie (Kristen Wiig) are those people who walk a fine line between normalcy and the grotesque. Their affinity toward the dark stems from their relationship with their somewhat morbid father, who nurtured them after their mother left them. Their most memorable possessions are two toy skeletons that their father gave them for Halloween before he took his own life a few years later.

Both Milo and Maggie go on to have close encounters with death. Milo attempts suicide after his lover leaves him. Maggie receives a call from the hospital saying her brother needs her moments before she was going to take her own life for various issues, stemming from her intimacy problems. They haven’t spoken to each other in 10 years, and these two realize that they need each other now more than ever. Milo moves in with Maggie and her husband Lance (Luke Wilson), who tries to make Milo feel at home despite their incompatible personalities. The twins attempt to heal together, but they end up deteriorating even faster after moving in with each other. Milo reconnects with an old lover, who was his high school English teacher (Ty Burrell), and Maggie has one of numerous extramarital affairs with her scuba instructor. Maggie is also trying to hide the fact that she is on birth control from her husband, who thinks they are trying to have a baby.

The air of levity The Skeleton Twins brings to the themes of lost love, suicide, and depression forces the film to straddle the line between a severely depressing drama and a light comedy. Hader and Wiig—whose backgrounds are in improvisation and sketch comedy—shine through on this nuanced script written by Craig Johnson and Mark Heyman, which won the award for Best Screenplay at this year’s Sundance Film Festival. Each character’s lines, not just the twins’, are filled with witty and terse dialogue. The secondary characters are fleshed out and exponentially enhanced by Wilson and Burrell’s performances. Calling to mind Burrell’s Modern Family persona, his performance in The Skeleton Twins is all the more jarring.

Johnson’s skill is not only exemplified in screenwriting, but also in his ability to direct. The opening sequence in The Skeleton Twins was one of the most original and visually striking produced in recent memory. It is composed of quick cuts of the child versions of Milo and Maggie playing, swimming, dressing up for Halloween, and being presented with the mini toy skeletons from their father. The shots are edited in an almost synesthetic experience. The opening plays as if it were a melody, a very rare feat to accomplish in an almost completely visual medium. Another great example of fine mis-en-scene is Milo’s attempted suicide. It is an over the top shot, and slowly you can see the pain and agony over his face as the blood slowly fills up his bathtub. Johnson has creative genius—composing scenes that are aesthetically different, yet do not lose their potency.

Where this movie succeeds is in its ability to make the audience feel deeply emotionally connected to Milo and Maggie’s characters, which is extremely hard when the characters and plot diverge drastically from the types of experiences with which audiences are familiar. Most people cannot directly relate to the twins’ dark background, but one can easily sympathize with them—even when disgusted by their morally and ethically ambiguous acts. That is the brilliance of Johnson, who hit a near home run with this film. His talent as both a writer and director bodes well for the rest of his filmmaking career—this film is a must-see for any moviegoer.