Monsters hiding under beds, children possessed by demonic premonitions, and the nightly invasion of a quiet home by supernatural forces—none of these tropes are exactly new to horror films. You could fairly call them staples of the genre or, if you are feeling less charitable, cliches.

In The Babadook, however, everything old is new again. This truly terrifying Australian import—which was made for only $2 million and captured international attention at this January’s Sundance Film Festival—contains many familiar elements. Unlike conventional horror films, these tropes are not trotted out haphazardly for a series of cheap scares. The Babadook earns its scares, putting them to the service of a deeply human and deeply disturbing tale of mother and son.

The mother is Amelia (Essie Davis), a widow whose husband died in a car crash on the night of her son, Samuel’s birth. Samuel (Noah Wiseman) is now six years old. A disturbed child with violent tendencies, he spends his time crafting makeshift weapons to defend against the monsters he imagines in his room. One night Amelia picks up a bedtime story off the shelf to calm him down. Instead, the book—a pop-up monster story called The Babadook—terrifies Samuel, who becomes convinced that the Babadook is real and living in their house. What seems at first like a mere nightmare soon becomes all too real. Amelia starts seeing visions of the Babadook and the book reappears—this time with extra pages—predicting that she will soon kill her son.

There is always a tension in horror movies between the urge to explain a movie’s horrors in realistic terms and the urge to chalk it all up to a nightmare. The best ones, however, split the difference, and The Babadook is no exception. Writer-director Jennifer Kent eases us into the story by anchoring its opening scenes in a mundane daily reality. We see Amelia working her unhappy job at a nursing home, visiting her son’s school to discuss his erratic behavior with school officials, taking him to a park with his cousin— scenes that might as well fit into a drama about the hardships of being a single mother. Still, Kent accents these scenes with eerie little touches that suggest the horror to come. He deftly uses creepy sound cues and abrupt, scene-ending cuts to suggest that something insidious is at work here.

When horror takes over the movie more directly, Kent shows her mastery at manipulating sound and image to create a pervasive sense of dread. Much of the movie’s scare factor comes from what it refuses to show. Glimpses of the Babadook are fleeting as Kent relies on visual echoes of the monster. From the wispy trees in Amelia’s suburban neighborhood to the images that inhabit her TV screen, she suggests that the monster’s presence is everywhere. Few films have used sound design to such great effect. Whether it is the shrill screams that predominate throughout the movie or the quiet, muffled cries of an animal’s suffering late in the film, The Babadook demonstrates that horror can be equally a matter of what you hear as what you see.

The scariest thing about The Babadook, though, is not the literal depiction of its monster or the technical perfection of its execution. The Babadook goes deeper than that, functioning as a primal myth about the hatred that can exist under the smiling surface of a mother’s love. Kent is lucky to have Essie Davis as her lead actress. She convincingly sells her character’s transformation, as Amelia’s sweet facade as a doting mother gradually breaks down over the course of the film. These changes in Amelia’s character— and all they suggest about her inner grief and loss—are far scarier than the monster itself. Jennifer Kent understands this, and it is that insight that makes the film so effective. The Babadook is the rare horror movie that takes the conventions of its genre seriously and uses them to look at the evil that lurks inside humans, not just monsters. 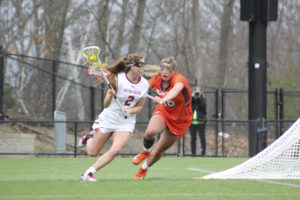 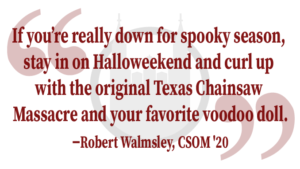