Home » Walsh Addresses Boston In First State Of The City 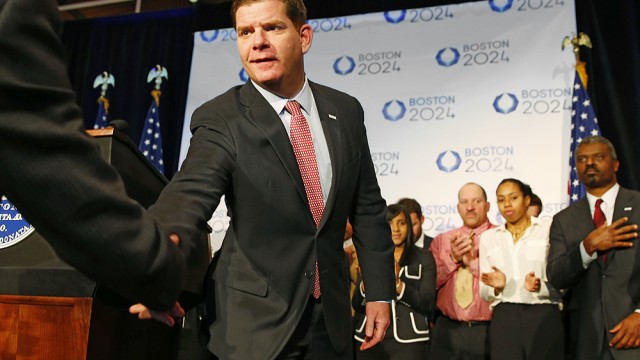 Walsh Addresses Boston In First State Of The City

In his first State of the City speech on Tuesday night, Mayor Martin J. Walsh, WCAS ’09, stressed education and additional housing in the city as vital areas that need to be improved in front of an audience of 2,500 at Symphony Hall.

Walsh’s address was comprised of forward-looking plans for primary and secondary schools, colleges, homeless shelters, and the closing of financial gaps between certain groups in Boston. In an effort to promote Boston’s budding entrepreneurial culture, Walsh’s administration will also launch StartHub, a program designed to give startups an edge in the city.

“Boston is a city of revolutionary innovation,” Walsh said. “We need to support our local talent and spread opportunity widely. So this year we’re launching StartHub, a regional program to unify and bolster our startups. A full-time ‘startup czar’ will help entrepreneurs grow businesses in Boston.”

Aside from promising to build new schools and promoting a housing development, Walsh highlighted the importance of Boston’s 2024 U.S. Olympic bid—treating the event as a method for Boston to exhibit its innovativeness and advancement as a global leader.

“We’ll take this once-in-a-lifetime opportunity to talk about our city’s future: in education, in housing, in transportation, and more,” Walsh said. “That’s why the public process is the ultimate benefit. It’s why I commit to you that we will hold transparent conversations on every impact in every neighborhood.”

Walsh made it clear in his speech that he is making education a priority for the city in 2015. Currently, high schools in Boston have a 30 percent dropout rate. Along with 40 minutes of extra learning time for students attending grades one to eight, pre-kindergarten classes will also undergo an expanded day with better quality class time. Local universities with a presence in the city could experience an influx of students, with plans outlined at Walsh’s address of “re-designing our high schools around pathways to college and career.”

Aside from improving the content in schools and extending the school day, Walsh’s ten-year Facilities Plan aims to update the schools in Boston physically. New STEM and Arts schools will be on the table during the coming year, and Walsh promised for there to be no “false starts” this year.

After addressing his primary and secondary school initiatives, Walsh also mentioned the plan to construct additional dorms on the over 60 college campuses in the Boston area. Emerson College was the first institution to respond to Walsh’s call for more dorms after the first off-campus census of college students, and the other colleges and universities with a presence in Boston have been encouraged to send in their applications as well.

“After getting the first-ever consensus of off-campus student housing, we’re asking our universities to build more dorms,” Walsh said.

Walsh’s promises for advancement through improvements in education and the construction of affordable housing was followed by a discussion on homelessness. Walsh addressed this concern by assuring citizens of opening a safe homeless shelter during the week of the address. This comes after he closed the bridge to Long Island where the city’s largest homeless shelter is located. He promised the conjunction of “the services and the housing that are bridges to new life” through the construction of the first Office of Recovery Services in the nation’s history.

“Nothing is more important to me than protecting our most vulnerable neighbors, whether the addicted or the homeless, our children or our seniors,” Walsh said. “This isn’t just policy to me. It’s personal.”