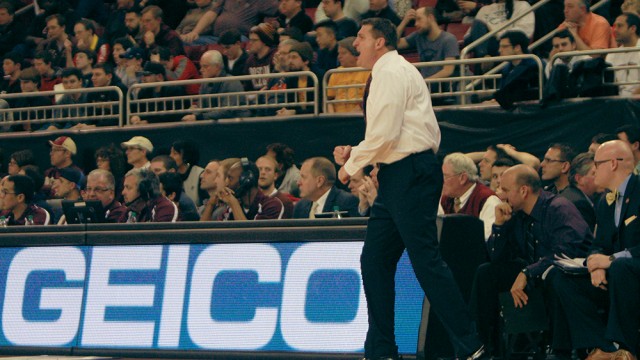 Jordan Roper took a step back, keeping his dribble.

He looked around the sides of Patrick Heckmann, who kept the guard from driving inside. Boston College’s man defense had shut down any options to pass, forcing Roper to make a play as the shot clock waned. He didn’t hesitate, fading back and hitting the 24-foot jumper over Heckmann’s outstretched arm.

Roper, although only averaging 5.3 points per game this season, has been a key factor for Clemson in its past three games, putting up 12 and 18 points in the Tigers’ wins against Wake Forest and NC State. On Saturday, Roper had the best and most efficient game of his career, notching a game-high 24 points on 8-11 from the field, while also hitting six-of-eight from beyond the arc.

Somewhat fortunately for BC, Clemson never truly exploded offensively. Head coach Jim Christian’s complex defenses, which included having his guys switch from zone to man-to-man mid-play, combined with numerous missed opportunities on Clemson’s side hold the Tigers from opening too large of a lead. They shot just below 40 percent shooting from the field, and just above 30 percent from 3-point range.

BC, meanwhile, had similar shooting woes. The team seemed more energetic and active than in its game against Georgia Tech last week, but the guys missed out on a lot of the little things. A short, turnaround jumper in front of the free throw line from Eddie Odio missed a foot to the right of the rim. A steal and potential fast break was cut short when Dimitri Batten dribbled the ball off his own leg.

One of these small, painful moments for the Eagles on the defensive end came with seven minutes to go in the first half, when center Sidy Djitte twice missed a layup under the hoop before getting his own offensive rebound. He would miss the third time as well, but those were just two of 13 offensive rebounds for Clemson—more than double BC’s six.

Part of this disparity came from a lack of height on BC’s side. Although the Eagles overall have one of the taller teams in the nation, their biggest man, center Dennis Clifford, has seen greatly-reduced playing time in BC’s past three games. After completely missing the Eagles’ matchup against Georgia Tech due to illness, Clifford played nine minutes against Louisville and just four minutes against Clemson.

In his place, Will Magarity had two good starts against GT and Louisville, going 4-6 in both with nine points and five-plus rebounds. On Saturday, however, Magarity went 0-4. He missed all three shots from behind the arc, two free throws, and gained just three rebounds.

Olivier Hanlan and Aaron Brown continued to lead the way for BC, combining for 30 points on 10-of-20 from the field. This marked the fourth straight game that Brown has reached double-digits, breaking out of a three-game stretch in which he combined for 21 points.

Although Brown and Hanlan were far more efficient than they have been in many of BC’s games thus far this season, BC still stared up at Clemson from a 20-point deficit for almost the entire game. In such a contest where both guards are shooting well and the big men aren’t producing inside, the Eagles need to try to get both guards more shots.