Home » Heights Through The Century: Integration And Inclusion At BC 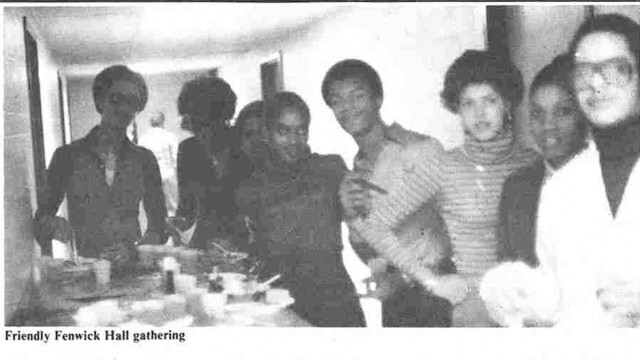 Heights Through The Century: Integration And Inclusion At BC

A walk down BC’s contentious path from an all-white institution to a more racially diverse community—with setbacks and protests along the way.

Since Boston College’s founding in 1863, the face of the University has significantly changed. From existing as a local, all-male, white commuter school in South Boston—which opened its doors in 1864 to include the oft-excluded Irish immigrant working class—to becoming a residential, coed, diversified college in Chestnut Hill that attracts many international students, the campus has seen dramatic development over the years. Educational inclusion was not always an intrinsic value of the Jesuit institution, and BC’s extensive history suggests that it grappled with the topic of integration for some time. Not until 1968—the same year that Martin Luther King, Jr. was assassinated in Memphis, Tenn.—did BC make its first real effort at incorporating African-American students with the Black Talent Program.

“The first black students we had were in the 1930s—there may have been a couple before them—but there were very few, maybe one per graduating year, and not every year,” said James O’Toole, professor of history and Clough Millennium chair of the history department. “The most famous, though, was Lou Montgomery, the star of the football team in the late 1930s and early ’40s.”

Lou Montgomery, BC ’41, a Brockton, Mass. native who played running back for the University during its powerhouse, Top-10 years, was the first black athlete at BC—and a legendary student-athlete, at that. While he would later be posthumously inducted into the BC Hall of Fame in 1997, his tenure on the team itself accompanied pervasive racism, given enduring Jim Crow laws below the Mason-Dixon line. “It’s a bit of a sad story, unfortunately,” O’Toole said. “In those years, college football was still very much segregated, so when BC played teams in the South—particularly at schools like Clemson—Montgomery was left home.

“At the time the University said, ‘It’s because he’s not allowed to stay in the hotel with the other players,’ but no, it was, in actuality, because southern teams would insist that blacks not play,” O’Toole said. “And, even when southern teams came here, [Montgomery] couldn’t play. Obviously, looking back it doesn’t make BC look so great—why didn’t the administration do something? We’re a Jesuit school, why didn’t someone stand up to this? At the time, people thought, ‘Well, those are just the rules,’ and continued to treat black athletes poorly.”

Due to this “Gentlemen’s Agreement” that resulted in Montgomery’s recurrently being benched at home or prohibited from joining the team for away games, BC did not allow Montgomery to participate even in bowl games: for both the Cotton Bowl of 1939 and the Sugar Bowl of 1941, Montgomery was barred from playing.

As the Civil Rights Movement began to rock the nation in the late 1950s and ’60s, integration became a prominent topic of conversation for educators throughout the United States. In Boston, discrimination regarding busing and schooling was extremely prevalent, for it was not until Sept. 12, 1974 that the federal government implemented court-ordered desegregation of public schools. An article written by Bill Billingham from the Oct. 4, 1963 issue of The Heights evidences this, as a lecture given by then-Dean of BC Law Rev. Robert F. Drinan, S.J. surrounded “Segregation in Northern Cities, especially De Facto Segregation in Boston Public Schools.”

According to Billingham, “the Negro’s situation in the north is worse than his position in the south, for in the south he at least knows just where he stands. The seven million Negroes who have moved from the south to the north since the war are living in the most dilapidated sections of the large northern cities—the ghettos which have long since been abandoned by the immigrant Irish and Italian classes.” Within the article, Billingham quotes Drinan as saying, “And for this reason equal educational opportunities for every negro are being demanded by the NAACP … of the fourteen thousand negro schoolchildren in Roxbury, nine thousand attend schools where the enrollment is 90 percent or more negro.”

Drinan then referenced Time magazine, which stated, “Boston has not only the nation’s oldest public school system, but also its most senile … The so-called ‘Athens of America’ seems impervious to the idea that big cities need the best schools in the country.” To conclude his lecture, Drinan said, “Until there is integration in educational institutions the prejudice, inferiority and lack of understanding and knowledge between negroes and whites will continue to exist.”

In his All Saints’ Day address to Jesuits in the United States in 1967, then-Superior General of the Society of Jesus Rev. Pedro Arrupe, S.J. told American Jesuits emphatically that they must become more fully involved in African-Americans’ fight against poverty and racism in the United States, as covered in a Nov. 13, 1967 issue of The Heights. “The riots and bloodshed accompanying racial strife in the United States have given us a grim forewarning of the danger lurking in the land unless effective measures are taken, quickly and sincerely, to eradicate racial injustice and grinding poverty,” Arrupe warned, adding, “[racism] can never be solved adequately by civil laws or civil courts. It must also be solved in the consciences of men.”

Most famously, however, Arrupe said, “American Jesuits cannot, must not, stand aloof,” calling to mind how, “before the Civil War, some American Jesuit houses owned Negro slaves. It is humbling to remember that, until recently, a number of Jesuit institutions did not admit qualified Negroes. It is embarrassing to note that up to the present, some of our institutions have affected what seems to be little more than token integration of the Negro.”

“In the 1960s, there was a big change: people were more aware of the Civil Rights Movement and racial injustice,” O’Toole said. “Then Fr. Arrupe’s statement in 1967 really itemized the number of ways Jesuit universities could do more for minorities—admit more, create scholarships, create tutorial and transitional programs, etc. And that’s really when AHANA students started to have a much bigger presence here.”

Because BC was still a commuter school at this time, the student population overwhelmingly came from Boston. The Black Talent Program was largely aimed at lower-income families, however, and so it recruited many students from cities such as Roxbury and Dorchester. “The administration recognized that high schools there may not have been as good, and so that’s when they started special tutorial programs for black students coming from those areas,” O’Toole said. “I think BC knew it wanted to have a program, but it didn’t really know how to go forward, and so there was a fair amount of short-lived, but intense turmoil at the start—disagreements about how quickly it would grow.”

Fenwick Hall was, for a brief period of time in the 1970s, the designated black student residence hall, as most black students who attended BC—even if they were locals—did not commute. “The argument for it was that black students wanted to be with each other for moral support, but at the same time, it reminded the administration of segregation somewhat, and so the separated housing did not last long,” O’Toole said. In a Heights article from April 18, 1977, Daryl Logan confirms, “Fenwick Hall, located on the upper campus of Boston College, will become racially integrated by floor, effective next school year … in compliance with federal laws”—after seven years with a predominantly black student population, the University would implement “racially mixed habitation” within Fenwick.

The transition toward an increasingly residential BC campus fostered the development of seemingly two student bodies: the commuters and the non-commuters. “There were ways this was sort of unintentionally enforced,” O’Toole said. “Residents—who had meal plans—ate in Mac, and commuters ate in Lyons.”

A Heights issue from Oct. 26, 1970 gives testimony to this, as an article on the Black Student Organization discusses its hopes for heightened presence on campus. “This year the Black Student Organization … feel that they no longer should have to go off campus for all social activities, and as Newton is definitely still socially geared for the upper-middle class white student, the black students feel that they should not be solely subjected to the traditional activities,” the article said. “In the 1970s there were even a few stay-ins in Gasson and the Botolph House,” O’Toole said. “Black students were lobbying for an increased percentage of minorities on campus, for greater representation, etc.”

In 1979, with encouragement from a BC student group led by Alfred Feliciano, BC ’81, and Valerie Lewis, BC ’79, the Board of Trustees approved the Minority Student Programs’ name change to the “Office of AHANA (African American, Hispanic, Asian-American, and Native-American) Student Programs (OASP).” From 1979 to 2005, OASP flourished under Donald Brown, who established hallmark programs such as the Benjamin Elijah Mays Mentoring Program and Options through Education (OTE). In July 2009, OASP partnered with student groups to celebrate the 30th anniversary of the AHANA acronym through the Reconnect alumni gathering. As of September 2014, the undergraduate population of BC includes 32 percent AHANA students.

Due to the recent deaths of Trayvon Martin, Michael Brown, and Eric Garner, students at BC staged a “Die-In” in the newly refurbished St. Mary’s Chapel on Dec. 9, 2014—an event reminiscent of the stay-ins staged by black students in the 1970s and 1980s. With chants and slogans such as “I Can’t Breathe” and “Black Lives Matter,” many BC students protested police brutality and what they considered an inadequate response from the University to the killing of unarmed black men in Missouri and New York.

The protesters were initially issued notice of potential disciplinary sanctions. The event has since started a semester-long initiative, spearheaded by the Jesuit Institute, opening new dialogues on race at BC and giving faculty and students an opportunity to again reexamine the face of the University.