Home » Problems With The T Affect The University 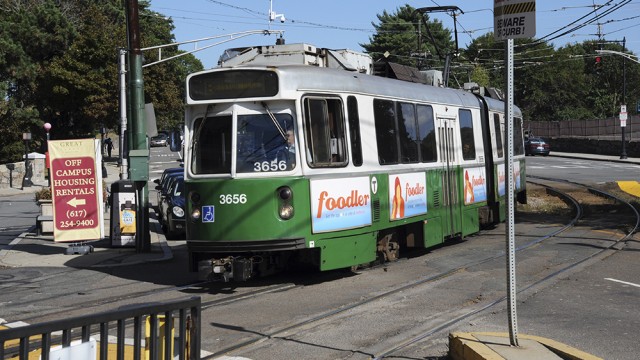 Problems With The T Affect The University

The MBTA and the Greater Boston area struggled to recover from the snow that blanketed the city earlier this week. Rail service eventually resumed on Wednesday, ending a two-day city shutdown that was imposed following a historic snowfall that dumped over two feet of snow in some areas of Massachusetts.

Over the past week, numerous cancellations and delays on the T have made it increasingly difficult for local residents to navigate the city. Some MBTA trips over the past few days have ended in fire—others in ice. As a result, thousands of city workers could not make it to work, hurting businesses. Newly-elected Governor Charlie Baker called the recent delays “unacceptable” and vowed to work with the city to improve the service as soon as possible. In the midst of the snowstorm, the city asked commuters to seek alternative transportation. MBTA general manager Beverly Scott abruptly announced her resignation on Wednesday amid accusations at the agency after the groundbreaking snowfall in recent weeks. Governor Baker will meet with MBTA officials on Thursday to create a plan of action for the future.

The recent delays and cancellations of the T have raised questions on whether the troubled system can be modernized soon enough to handle the Olympic Games if Boston wins its bid to host the 2024 games. Mayor Martin J. Walsh, WCAS ’09, has argued that Boston’s Olympic bid will speed up the process in revamping the MBTA, as the 2017 decision date for awarding the games will require city officials to create a set plan of action for the system. The Massachusetts Department of Transportation (MassDOT) decided to extend the MBTA late-night program until June 19. As part of the program, the agency provides rail and bus service for 90 additional minutes on Friday and Saturday nights.

According to The Boston Globe, the MBTA currently owes nearly $9 billion in debt and interest, while at the same time Governor Baker is facing a $786-million state budget deficit. The Boston Herald also reported on Wednesday that the MBTA has failed to publicly file reports detailing the problems relating to the system for over five years. On a given day, a snow-related shutdown of roads and transportation is estimated to cost Massachusetts $265 million a day, according to a study from the American Highway Users Alliance.

At Boston College, the expectation is that the public transportation system will be in proper working condition and be able to transport students into the city. At a University that prides itself on its commitment to service, programs like 4Boston and PULSE were cancelled multiple times recently because of the troubled system. In many cases, an increasing number of students are relying on Uber as a viable—though expensive—transportation option, due to the unreliability of the T. As the recent snowfalls have shown, the T is increasingly becoming an obstacle for the city of Boston. The aged system is becoming too costly—slowing commutes and hindering economic progress for the city. In order to maintain a reliable public transportation system in Boston, city officials need to collaborate, realizing no number of resignations can fix the T’s troubles, and immediate action is necessary in reclaiming Boston’s failing infrastructure. While Scott’s resignation indicates a start to the process of reformation, it will take far more to create real change.

‘Cycle For Survival’ Puts New Spin On Cancer Research
Desmond Howard, Doug Flutie, And The Complex Art Of The Celebration